Remembering Don Wilson of The Ventures 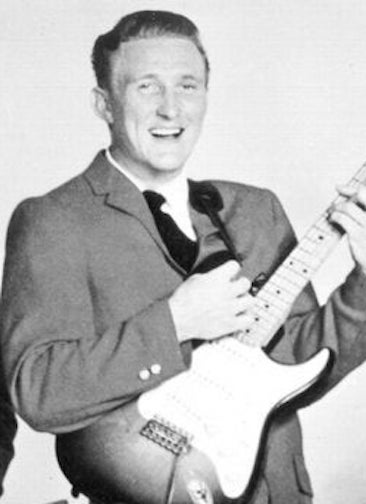 I should’ve had an obituary prepared for The Ventures’ co-founder, Don Wilson, who passed away January 22, 2022. He was 88 years old, after all, and journalists are supposed to do that sort of thing. However, longevity ran in Wilson’s family… and I assumed that the genetics that kept that right hand furiously moving across six strings would keep him around a while longer. Besides, I never wanted to consider his departure.

It is impossible to eulogize Don Wilson without celebrating The Ventures. Their rhythm guitarist and de facto leader was the last surviving member of the group’s 1960s “classic” lineups. Though the group continues to record and perform, Wilson last toured with them in 2015. 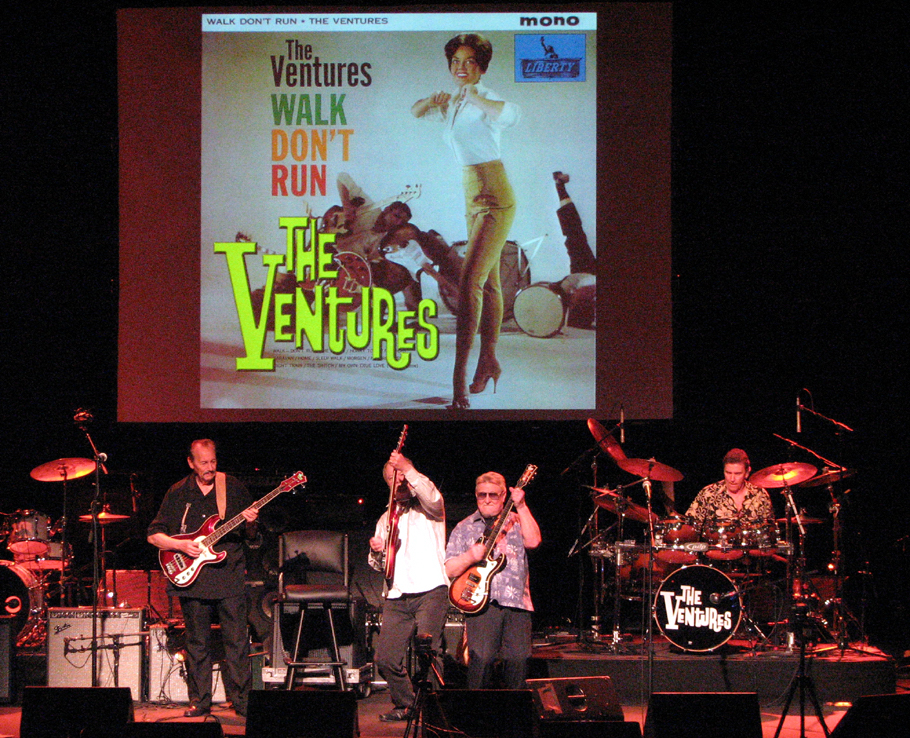 I have a bit of history with the band. The Ventures On Stage is the first record that I can recall hearing; my dad had it. My stepfather is still a huge fan. As a teenager in the ’80s, I’d leave a bedroom sonically battered by the likes of The Clash and The Cure and walk down the hall into the family den, where Ventures records were often in rotation. A cultural clash, indeed, but what an education I received. The Ventures played a charity concert at my high school in 1986, which I thought was remarkable kismet. Little did I know that I hadn’t come full circle with them, after all. The circle was just beginning.

In a group chock-full of humility, Don Wilson was as close to a type A personality as The Ventures could offer. Robust and energetic, his was the sort of contagious enthusiasm that never ventured into obnoxiousness. Wilson was a complex man, as most artists are—and as with many artists, he was simultaneously self-effacing and proud of his work. With a journalist, the rhythm guitarist was always ready with a mental list of his long under-heralded band’s accomplishments; for years, he referred to The Ventures as “rock ’n’ roll’s Rodney Dangerfields.” In the next breath, he would often mention the superior skills of other guitarists, of guest artists, of his own bandmates. Don Wilson literally taught at least one generation how to play (via the Play Guitar with The Ventures LPs), but he would often point out that his own talent was… “limited,” as he liked to say.

“Bob (Bogle) found it on the Chet Atkins album, Hi Fi In Focus… Atkins did it in a finger style, almost jazzy; we couldn’t play it, but we thought it was great,” Don told me in a 1998 interview for Seattle’s Rocket magazine. “We loved the melody, so we gave it a rock beat, translated it into something that we could play—and what we thought of turned out to be something with commercial appeal.”

Wilson was, of course, modestly referring to the band’s signature tune, “Walk, Don’t Run,” a song that he, Bogle, and a Beta version of The Ventures began winning talent contests with in 1959. The next year, the song hit Billboard’s number two slot—and became one of popular music’s most influential tunes of all time. Rock’s paradigm of a 4-piece band with rhythm and lead guitar was set.

Bandmates Nokie Edwards and Gerry McGee were acclaimed for their prowess as guitarists, but Wilson’s descending chords are the first you’ll hear on “Walk, Don’t Run.” For much of his career, Wilson played a Fender Jazzmaster, and he played the shit out of that guitar—an oft-staccato style that was an integral aspect of “The Ventures Sound.” I first came within reach of his battered axe as The Ventures stopped a concert and sang “Happy Birthday” to me from the stage. I’d just met them in person for the first time three hours earlier. I was 30 years old, and had recently started writing again. I’d abandoned Cameron Crowe-ish ambitions—along with school—ten years previously. 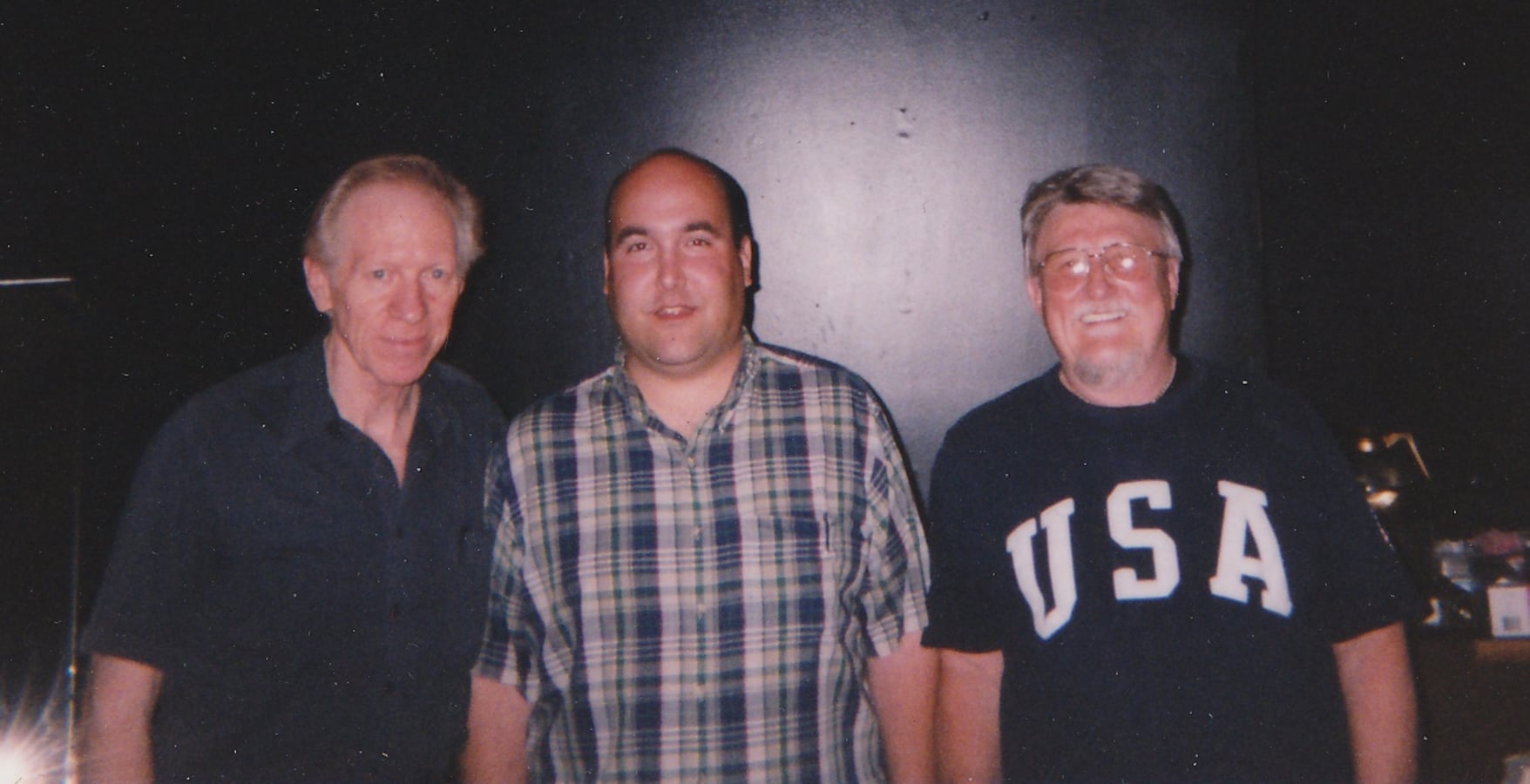 I don’t know who created the concept of prepaid “VIP meet and greets” with concertgoers, but it sure wasn’t Don Wilson. The Ventures were renowned for their interaction with fans, both in the States and in Japan (where they were much more popular than the Beatles in the ’60s). After almost every show, they signed autographs and posed for pictures. Every audience member was a VIP, and they didn’t have to pay extra. I don’t think anyone ever waited their turn and came away empty-handed. But it was more than signing and smiling for cameras; they genuinely wanted to talk to the people who put food on their tables. Each member of the band was like that, for decades. “Hey, we helped invent modern rock ’n’ roll 30-40-50 years ago, we’ve signed a million autographs and hope to sign a million more. We are genuinely pleased that you liked the show.” It was one thing to witness this approach as a fan, but later it was truly something to watch as a journalist. No prima donnas, no bad attitudes. Some might’ve called them squares from a bygone era; others might’ve tagged them “professionals.”

I seem to have written one or two articles a year about The Ventures for one magazine or another, for over a decade. When the band was in town for a show or an event, I showed up—often with camera. Always had an invitation; I didn’t have to ask. Press conferences, after parties, green rooms… I logged many hours talking to a band who once filled a shelf-foot of my step-dad’s LP collection. They occasionally regaled me, when prodded, with eyebrow-raising tales that often underscored the comparatively hard work required of most rock stars in the 1960s. Rock stars who would sometimes tour by car, pushing each new record as if the last one never existed.

Wilson and Co. generously afforded me so much access, but I wasn’t an exception in the scope of their career. I know that they did the same thing for so many other writers over the years. However, during “my time” with The Ventures, I was sometimes the only journalist in attendance. I was happy to have them all to myself, so to speak, before a concert… but I found that curious. More of an example of how notoriously fickle the Seattle-area news outlets can be than an indicator of The Ventures’ stature. 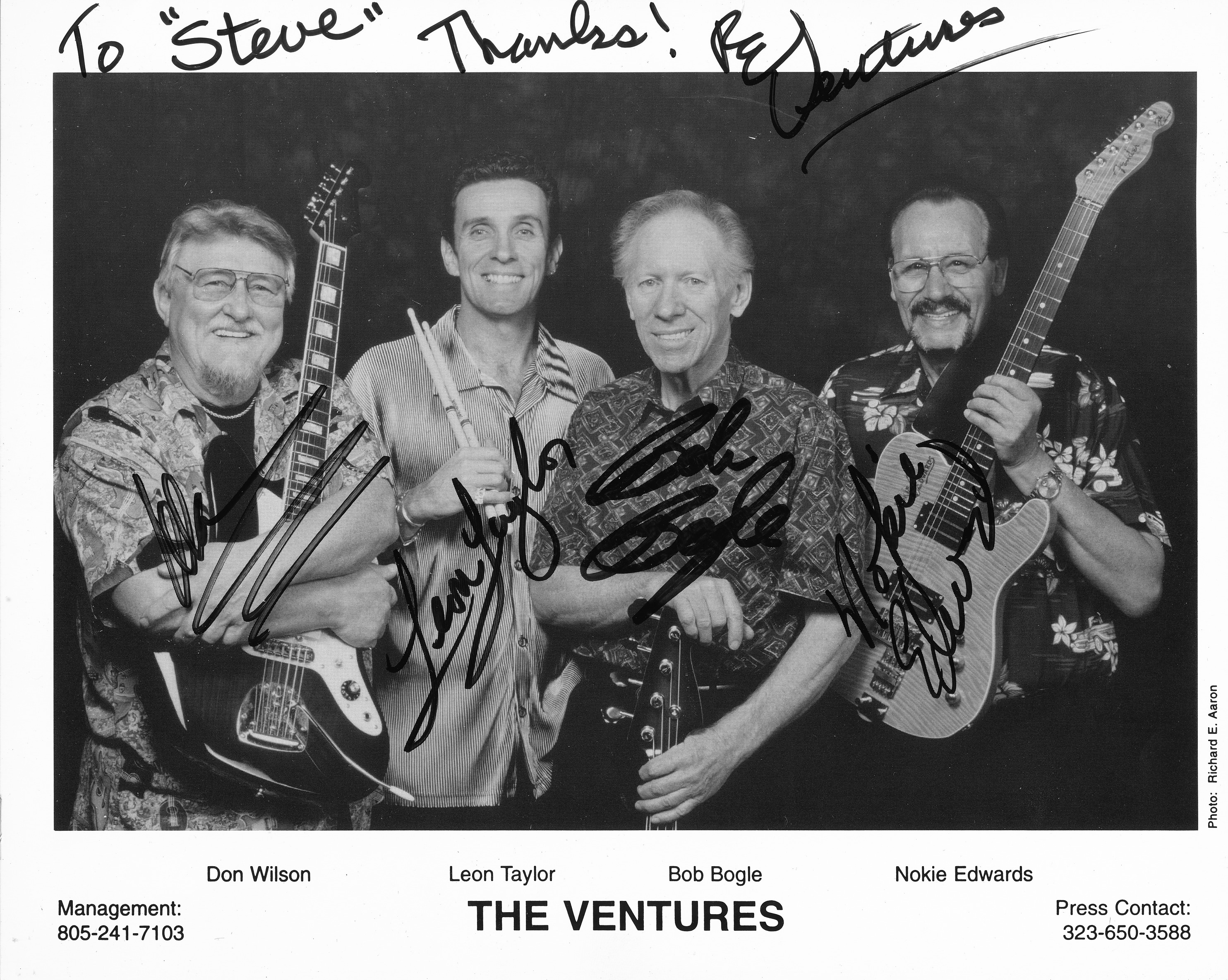 While the Pacific Northwest’s media can be hit-and-miss when it comes to covering native sons, The Ventures enjoyed a loyal fan base in the area. In fact, it was a grassroots effort that played a key role in the band’s induction into the Rock ’N’ Roll Hall of Fame. Like a lonely octogenarian asking god why he hadn’t been called up yet, Wilson often wondered aloud why his group had been routinely snubbed. One by one, year by year, his peers—hell, those he influenced—were called to the podium, instead. Wilson was genuinely confused, and so were the buyers of more than 100 million of his records. Finally, in 2008, it happened. I watched John Fogerty present The Ventures on HBO. Then, with longtime collaborator (and current Ventures spearhead) Bob Spalding filling in for an ailing Bogle, the triumphant group played a terrific set highlighted by “Hawaii 5-0.” Forty-eight years after playing their first hit on Dick Clark’s Saturday Night Beechnut Show, they were back on national television. 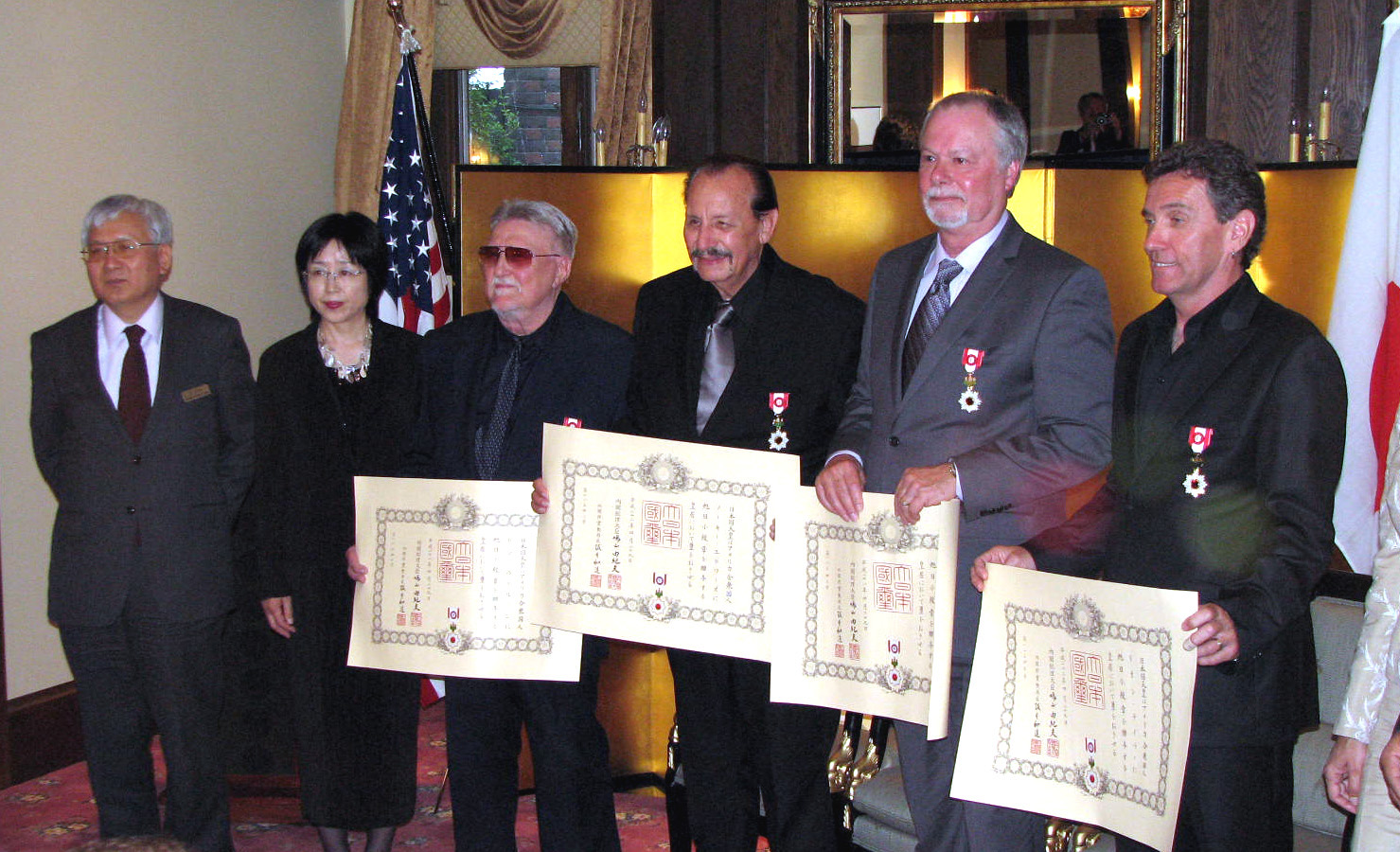 I had my camera ready at the Japanese Consul’s mansion in Seattle when The Ventures were awarded the country’s Order of the Rising Sun, Gold Rays with Rosette. They were basically knighted. The whole evening was mindblowing, witnessing firsthand how much the people of Japan revered Don Wilson and his bandmates. They were—still are—considered demigods, and for good reasons. The Ventures have toured Japan dozens of times since 1962, for starters. 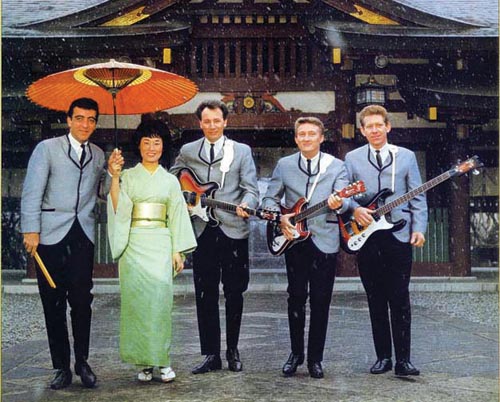 In 2000, Wilson screened an example of Japan’s Venturesmania for me and my mother in his living room.

After learning that mom was a big fan, Wilson had invited us to dinner with his family at his former residence just south of Tacoma. His house had an elevator! My mom and I were at a dinner table with a bonafide rock legend! And Wilson was so kind to my mom—everyone was. Afterwards we all watched the astounding documentary about The Ventures’ momentous 1965 tour of Japan, Beloved Invaders while one of its stars provided context. A history lesson that I will never forget. It was like watching A Hard Day’s Night with Paul McCartney, on Sir Paul’s couch. As he explained key scenes to us. With popcorn.

If Don Wilson had somehow never retired, and if Covid had never struck the world, he could easily have died in Japan. It had almost become a Ventures tradition. McGee suffered a fatal heart attack in Tokyo while on a solo tour there in 2019. Edwards (who passed away in Yuma, Arizona in 2018) endured a lengthy hospitalization in Japan after two on-tour heart attacks in 2012. Drummer Mel Taylor fell fatally ill there during a 1996 tour, but made it home—he literally passed his Ventures torch to his son Leon from his deathbed in Los Angeles.

Bob Bogle, whose widow is Japanese, did not die in Japan. The Oklahoma native succumbed to non-Hodgkins lymphoma in his second hometown of Vancouver, Washington, in 2009. At his funeral’s reception, I stood there talking with Wilson for about ten minutes before my long drive home. Nothing much was said. What could a man say after losing more than his best friend? Small talk, mostly, while a grieving giant tried to keep his composure. Outgoing Wilson and soft-spoken Bogle not only started the band, they were The Ventures’ core. Seemingly inseparable. In interviews, the guitarists often finished each other’s sentences. They were quite a pair—a marriage of sorts that outlasted most that involve vows and rings.

“We’re not gay or anything,” Bogle assured me back in ’98, as his partner chuckled. “Just friends.” “More like brothers,” Wilson added, and he meant it.

So it is even more fitting that Wilson quietly slipped into the next world in Tacoma, about 140 miles due north of where his friend was laid to rest. In a town that still retains some of its mid-century character, long a rock ’n roll city. A town where, almost 62 years earlier, two young masonry laborers and newfound BFFs bought a couple of cheap guitars from a pawn shop and learned to play them. Something fun to do after work.

I last covered The Ventures in 2010. My late wife became ill that year, and I essentially stopped writing for the duration. But I did see Don once again, bumping into him at a Seattle hospital four years later. Don was leaving after a routine appointment, We chatted for only a minute, as he was late for something. Let’s talk soon, we agreed. For one reason or another—laziness included—I hadn’t picked up the phone to call him since. Just last week, I thought about calling Don, after contacting the band’s amazing manager Fiona Taylor (Mel’s widow) first to see how he is. But perhaps that particular time capsule was better off sealed. Don once knew how much he and his band meant to me… and I was reminded so many times of his appreciation. A weak salve-sentiment to console myself with as I write this in the wee hours.

The most important aspect, really, of Don’s legacy is that countless journalists and fans and music-biz people have much better Don Wilson stories than I do. Yes, he influenced—virtually taught—thousands and thousands of musicians, sold more records than anyone could count, and was one of the hardest-working artists in show business for a solid half-century. But Don’s consistent demonstration of how a rock star (and he’d laugh at that term) should treat journalists and music-biz people and especially the paying customers, the fans… that was truly inspiring. Legendary. He brought so much happiness to so many.