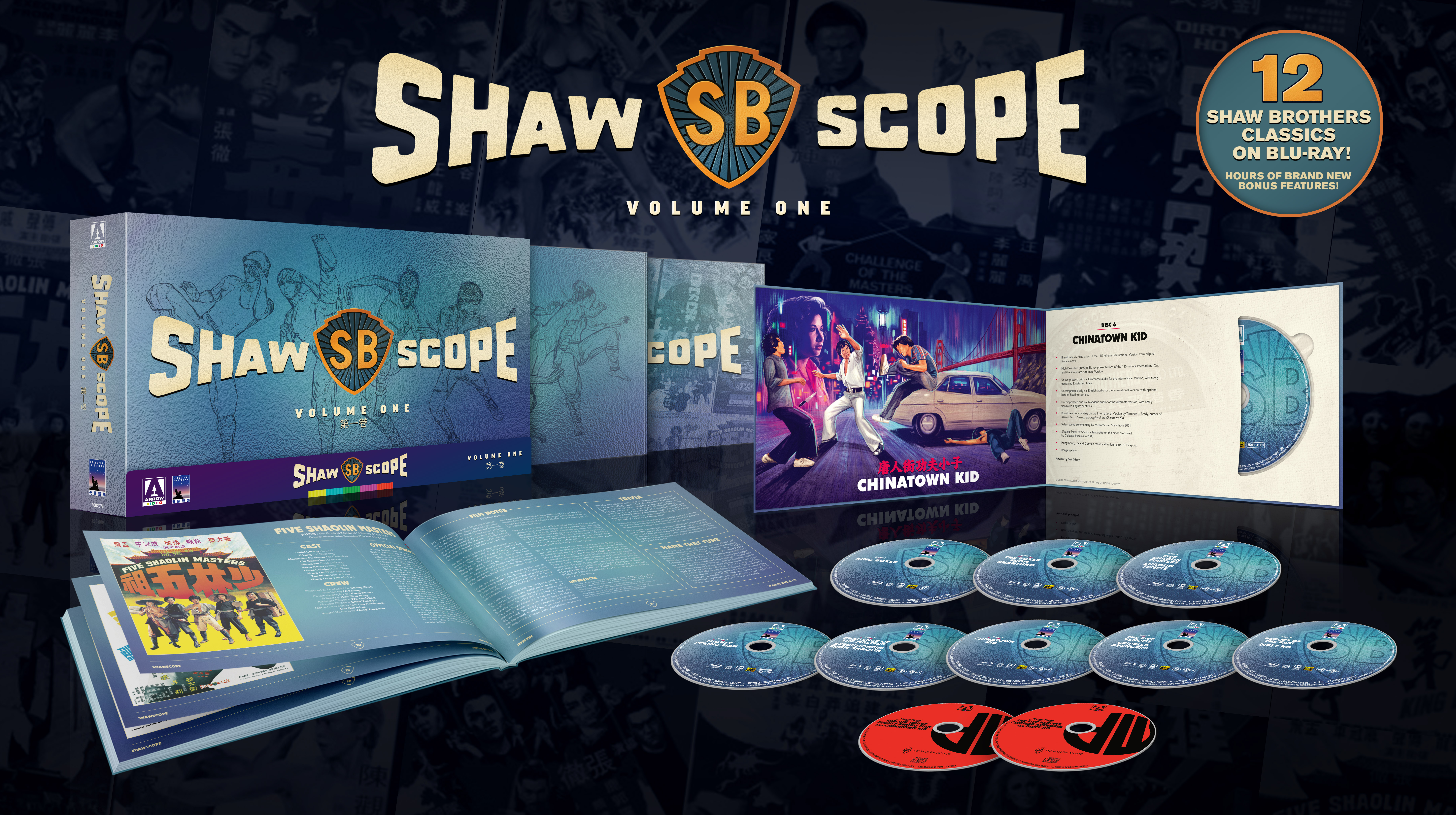 In the early 1970s there were few fads as unlikely as the proliferation of martial arts films in the West. Fueled by the David Carradine TV movie and series Kung Fu and the meteoric worldwide superstardom of Bruce Lee, there was a sudden and seemingly unquenchable thirst for “kung fu’’ movies, and the Hong Kong-based Shaw Brothers studio was only too happy to oblige. With its iconic “Shawscope’’ logo, the studio produced some of the best and most memorable martial arts films of the era. Although the films would often be dismissed as “chopsocky” trash, with much of that reputation well earned with far too many Bruce Lee clones and dubious dubbing, the Shaw films were usually dependable for well crafted and innovative films that would help fill the content void for drive-ins, cable TV, and home video well into the 1980s, the irony being the widescreen scope format brutally cropped, panned, scanned, and squeezed in order to fill the roughly square dimensions of TV sets. In the last decade-plus, the kung fu film has lost its omnipresent place in the culture, despite the best efforts of Quentin Tarantino and the Wu-Tang Clan. There have been rights and distribution issues to be sure, but another part of the problem is there are so many titles from the 1960s through the end of the New Wave in the 1990s that a few single film releases on premium formats ultimately feels insignificant. Arrow Video is looking to remedy that with their impressive and substantive 8-disc, 12-film Shawscope Volume One Blu-ray box set.

Arrow has done an exemplary job curating this set, delivering the goods for Volume One while keeping fans anticipating future installments of the series. The movies are the most important element to the project, and Arrow nails it with King Boxer (aka Five Fingers of Death), The Boxer from Shantung, Five Shaolin Masters, Shaolin Temple, Mighty Peking Man, Challenge of the Masters, Executioners from Shaolin, Chinatown Kid, The Five Venoms (aka Five Deadly Venoms), Crippled Avengers, Heroes of the East, and Dirty Ho. All terrific titles, but varied enough to keep it from feeling like a best-of that may make future editions seem weak. As martial arts movies go, Shaw Brothers’ films generally lean more to the serious than some of the utterly bizarre entries in the genre unleashed by some of their competitors both in Hong Kong and Taiwan. A big part of the success of Shaw films is their merging of traditional Chinese stories with narrative beats from American westerns that gives the films an easy to digest style for audiences outside of Asia, especially in the United States where these movies would find immortality. Of course there are notable exceptions, but in the main, the Shaw kung fu movies take place in a fluid, non-specific historical time period. It helps give the films a timeless quality while also keeping the problems of guns at bay. Once you introduce firearms into the equation, fists and swords no longer seem like viable weapons.

My personal faves on this set are The Five Venoms, Executioners from Shaolin, and Challenge of the Masters, although the quality of the films is not really at issue as much as the quality of the presentation, since so many of the films have been available in one form or another for decades and the question becomes “is this worth the upgrade?” Good news as the transfers on these films are impeccable. Forget DVD or VHS, even some earlier Blu-ray releases like King Boxer and The Five Venoms have been noticeably improved. It is so refreshing to see this genre taken seriously as movies instead of the haphazard and careless home video releases fans have been subjected to. When you factor in the wealth of extra features including commentaries, interviews, and in-depth featurettes, the decidedly hefty price tag becomes much easier to bear, making Shawscope Volume One both a welcome addition to a kung fu Blu-ray collection or a perfect way to begin one.