The Big Racket and The Heroin Busters

The Big Racket and The Heroin Busters 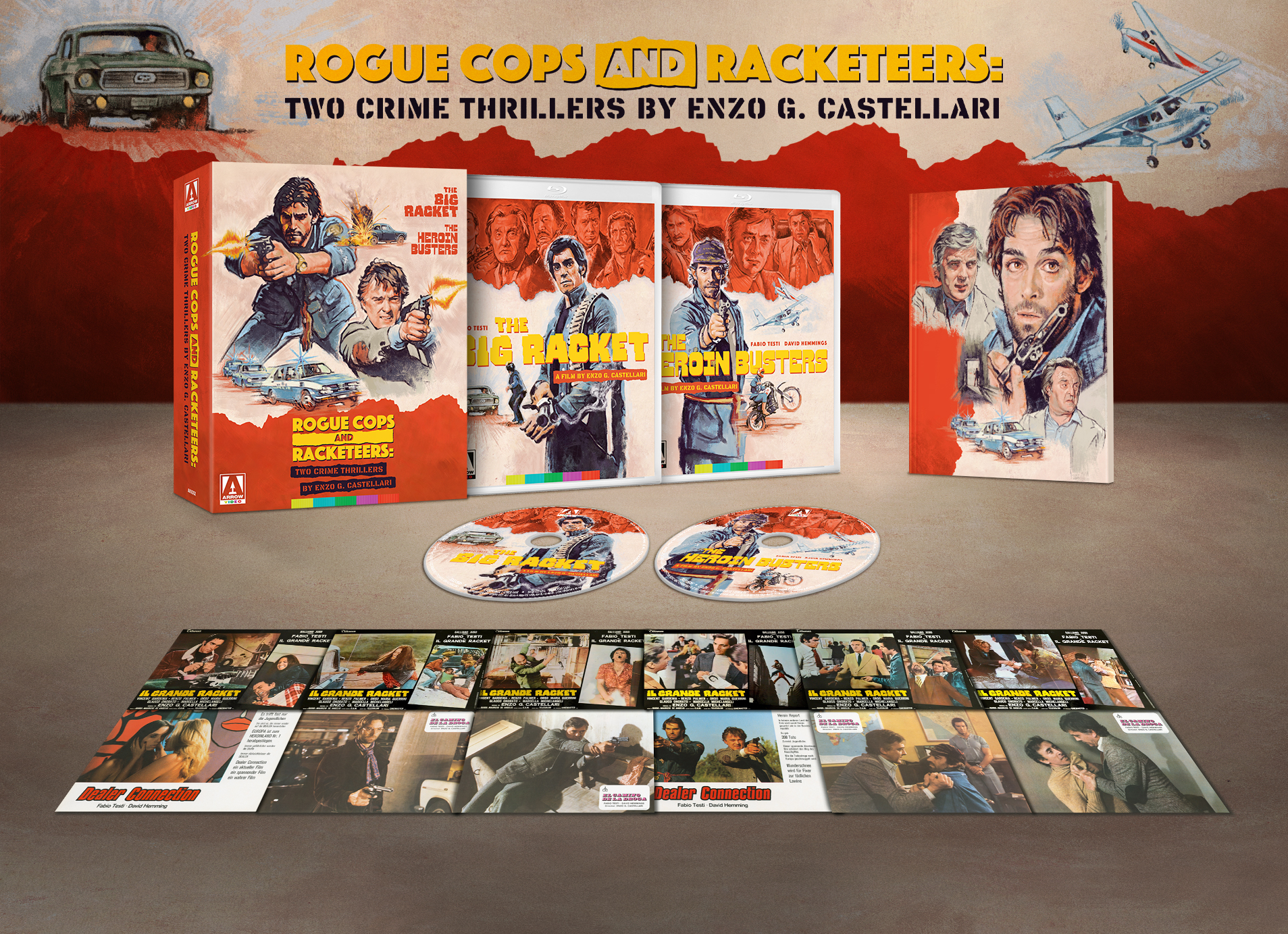 After the fabulous carnage of their politically-tinged Eurocrime box set, Years of Lead: Five Classic Italian Crime Thrillers 1973-1977 on Blu-ray, Arrow Video doubles down on another pair of ultra-macho cop movies with Rogue Cops And Racketeers: Two Crime Thrillers From Enzo G. Castellari. For a film industry that was built on cashing in on trends with seemingly endless copycat films, these two, The Big Racket and The Heroin Busters, by the same director and same leading man, could hardly be more different and still be in the same genre.

When a sadistic protection racket descends on Rome, police inspector Nico Palmieri (Fabio Testi) is thwarted on all sides in stopping the gang. Apathy and corruption force the already unorthodox cop into undertaking the desperate plan to recruit the mob’s victims for a vigilante suicide mission to take down the international racket once and for all. While The Big Racket may be a bit lacking in the car chases that often punctuate the genre, director Enzo G. Castellari more than makes up for it with gun battles. World War Two films don’t unleash this amount of lead, and Castellari’s frenetic pace keeps the orgy of violence from getting boring, or allowing the audience any time to examine the plot holes that might threaten to sink a less vibrant film. The film is quite violent, even by Eurocrime standards, and rather cruel, seeming to revel in the depravity of the racket. It isn’t as grim as it sounds, which is perhaps even more unsettling, when you find yourself caught up in the mayhem. Fabio Testi plays the lead with James Bond-ian good looks and a smoldering machismo that utterly fails him as he only manages to get a bunch of fellow cops and civilians murdered and himself nearly killed in a truly audacious stunt sequence where Festi’s car is pushed off a cliff with him inside, and we see the slow-motion tumble from within the car. It is assumed that the director didn’t actually send his leading man and a camera tumbling off a cliff in a car, but with the Eurocrime reputation for outlandish stunts, often performed by the actors, it isn’t an impossibility. Regardless of how it was shot, it is an astonishing bit of action cinema in what could have just been a forgettable car roll stunt.

The Heroin Busters opens with a ‘round the world sequence tracking the heroin trade from Hong Kong through The Netherlands to New York, while in Rome Interpol investigator Mike Hamilton (David Hemmings) is convinced there is an Italian connection. Hamilton is determined to break this link in the chain and stop the flow of narcotics, and his partner Fabio (Fabio Testi) is working deep undercover and on the verge of infiltrating the heart of the Rome operation if he can manage to keep his cover and keep himself alive. After the initial setup with some nifty procedural stakeout business, the film gets down to business with Fabio using his drug dealer cover to get close to the head of the operation and knocking some heads along the way to show how tough and capable he is. After a botched heist where his cover is blown, at least to the cartel, the last third of the film becomes an extended chase sequence. Foot chases, car chases, airplane chases, and even a white knuckle motorcycle chase through the subway punctuate the final act as Fabio attempts to alert the police and stop the big boss from getting away. Fabio Testi in The Heroin Busters is a far cry from his turn in The Big Racket. Here he is playing a supremely effective investigator working deep undercover to infiltrate the drug cartel. His look is an obvious homage to Al Pacino in Serpico as Testi sports a healthy stubble, ratty denim, and boots you can almost smell off the screen. Only his partner knows that he’s a cop, adding further stakes to the climactic chase scene as he has to simultaneously pursue and avoid the mobsters as well as his fellow officers. 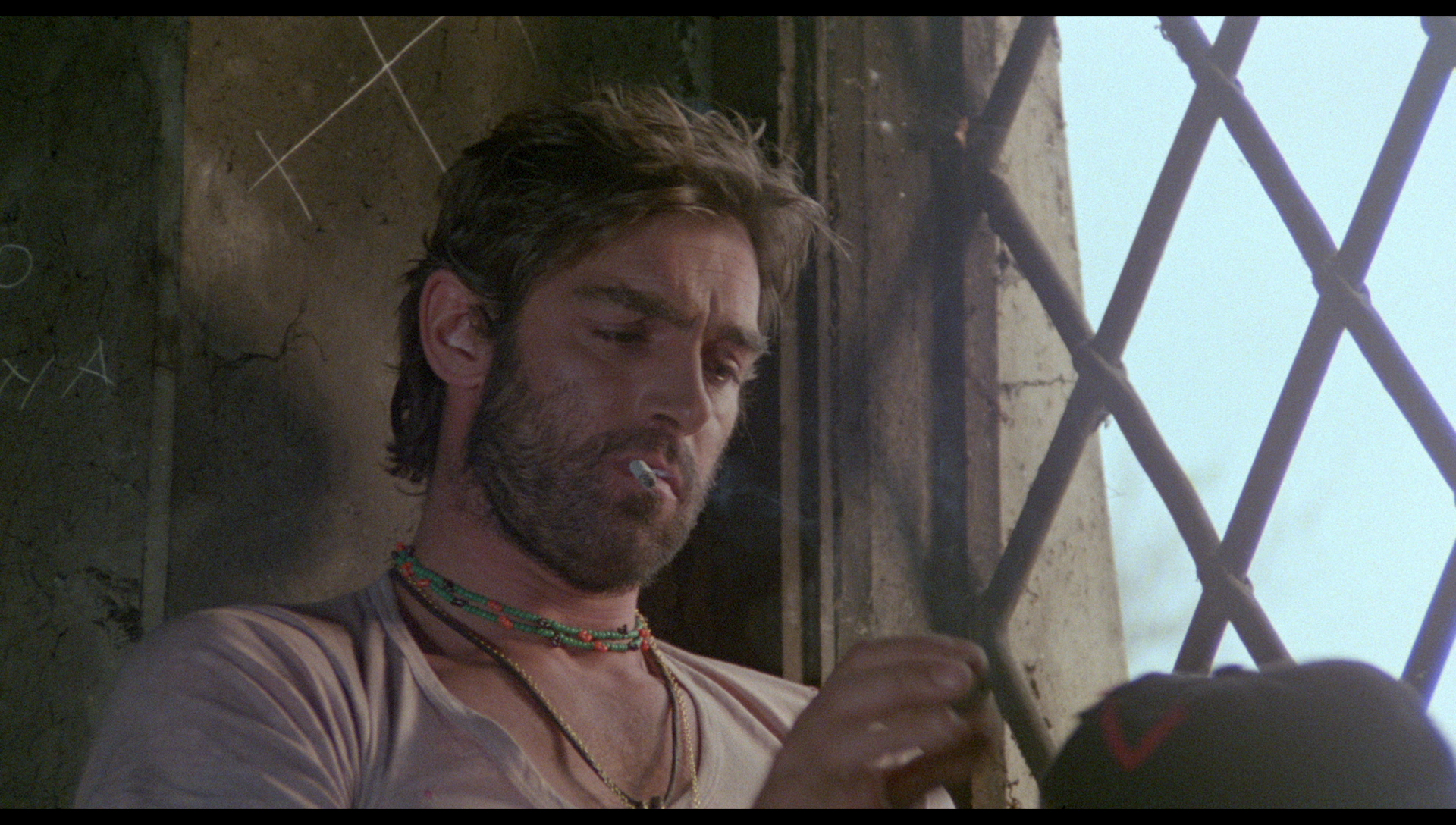 Fabio Testi in The Heroin Busters (1977)

Arrow Video employs a similar strategy to their Eurocrime releases as they have used with spaghetti westerns, which is forgoing a lot of single film releases with more multi-title discs that don’t skimp on the quality of the film transfer or extras. Both of these films look great, with English and Italian language tracks, audio commentaries from Adrian J. Smith and David Flint who recognize they are doing two films with a great deal of overlap in cast. They manage to do two films without much overlap in stories and let each film’s personality shine through on their discussions. This double feature also has extensive interviews with cast and crew and gorgeous packaging that features a booklet with essays by Roberto Curti and Barry Forshaw. There is a lot to love in this new Eurocrime set from Arrow for the hardened fan and the newcomer to this exciting genre of ’70s Italian filmmaking.