Beauty and the Geek

Beauty and the Geek 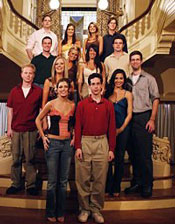 If you’d asked me before last night why I cancelled my cable subscription, I would have pointed to “reality” shows like Beauty and the Geek as one of the primary reasons. Like junk food, they’re not especially nutritious, but you’ll find yourself eating more than a healthy serving and shaking the bag for crumbs simply because it’s available and you’re mildly bored/hungry.

If you couldn’t guess from the title, the show pairs up a nerdy guy with a hot gal, and attempts to force some sort of reconciliation of perspectives between the brainy and superficial, with carefully-edited hilarity ensuing. There are multiple pairs shacked up in some fancy mansion in Los Angeles, and as has become typical with these kinds of shows, tension is added by having teams compete, Survivor-style, to be the last remaining odd couple and taking home some cash prize that will (hopefully) compensate for their utter humiliation in front of millions of viewers.

At the beginning Episode 4, there were four couples remaining. Each contestant is presented with a carefully spun subtitle – Chuck, probably the un-geekiest geek, is a “Student of Functional Neurology.” Bill is the “VP of the Dukes of Hazzard Fan Club” (what, too much work for one president to handle?), while Richard (who could have been lifted straight out of Revenge of the Nerds) has “Only Kissed One Girl.” Bad as that is, the girls fare far worse – “Lingerie Model,” “Future Fashion Expert” and “Beer Spokesmodel.”

Like most of these shows, Beauty and the Geek depends on the trainwreck effect, where you simply can’t peel your eyes away from the tragic events unfolding on screen. Richard, the obvious underdog and my personal favorite, fumbles his way through asking one of Beauties he’s not partnered with for dinner, finding it a process of elimination and recycling his pickup line each time. The dinner, presented via a hilarious montage, is the expected disaster. Richard doesn’t crash and burn – he opens up to full throttle and aims for the refinery. His unfortunate date asserts that “he will never get a second date. NEVER.”

There is more to say about this particular episode, except I would feel embarassed to find myself writing about it for longer than it took to watch. The show is heavily dependent on editing and setups to deliver the laughs – I get the feeling that the beauties aren’t as dumb, nor the geeks as inept as the show makes them seem. Then again, Lauren claimed to be smart: “I think my IQ is probably around 500.”

Beauty and the Geek: http://thewb.warnerbros.com/batg