Rolling Away: My Agony With Ecstacy

Rolling Away: My Agony With Ecstacy 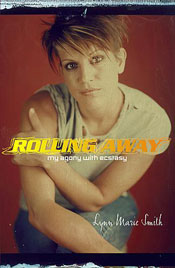 This gritty tale of Lynn Marie Smith’s missteps starts with the end of high school, her promising future and heading off from small town Pennsylvania to the Big Apple for college. Following her dream of becoming an actress, she starts at the Academy of Dramatic Arts with a bright future. She falls into a crowd that parties hard and uses any drug they can get their hands on. She’s so anxious for acceptance, so eager to fit in, that she sinks right into their world with no hesitation. While at first she seems to handle things rather well, her need for the high becomes too overpowering and she spirals out of control.

She lets you inside her life, with no detail spared. Every party, every bad dream, every new drug experience is told with such clarity, you’d swear you were on the trip with her. She writes so vividly you can almost smell the smoke in the bar. Her addiction starts off gradually but over the course of five months it builds into a frenzy that she can’t control. She ends up with Ecstasy being her drug of choice, and she does it almost daily. She loses friends, jobs and blocks of time. She has a total breakdown from not eating, not sleeping and she then begins to hallucinate regularly. Luckily during the middle of her final breakdown and spell of hallucinations, she somehow manages to call her mother, who comes to get her and takes her home to Pennsylvania. They hospitalize her for 14 days, where she is medicated with anti-depressants, anti-psychotics, sleeping pills and mood stabilizers. As odd as it seems to medicate an addict, it worked, it got her off Ecstasy and got her back on the track of living. They did a scan of her brain and showed her a comparison of hers next to a healthy brain and that visual was the one that kicked her into gear. She compared it to Swiss cheese. The doctor said that her brain looked like a 60-65 year old woman who’s had multiple strokes. After that, it became real to her, she had the “proof” she needed of what she had done to herself.

While she is back at home with her family she struggles against the protectiveness of her mother, the drinking from her father, feeling like a fish out of water back in a small town and trying to figure out where her life is heading next. While surfing the web, she runs across the casting section on the MTV website. They were looking for people who wanted to tell their stories about addiction to Ecstasy. On a whim, she filled it out, sent them her story and they called. They wanted to do a piece on her for a show called “True Life: I’m on Ecstasy”. She agreed with some reservations but found that sharing her experiences and talking about what happened to her seemed to not only help her, it helped so many others. She started talking to groups of kids who needed to hear her story and that parlayed into many other speaking engagements. The more she did it, the more she helped others and most importantly, the more she healed herself.

Lynn Smith is still speaking all over the country, telling her story in all its gore to help save someone else from living her nightmare. She’s also part of the advisory board of the Partnership for a Drug-Free America. She’s speaking about her experiences to strangers, living that time in her life over and over in hopes that she keeps one person from walking in her shoes.