Beatle Books: From Genesis to Revolution

Beatle Books: From Genesis to Revolution 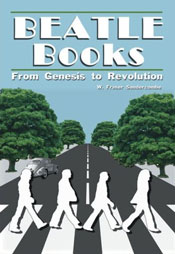 I had such high hopes when I heard the idea for Sandercombe’s book. After all, what Beatles fan wouldn’t want a book that assesses the ever-expanding landscape of books about the Fab Four? With nearly 1,500 books published since the early 1960s, it sure would be great to know which works by Beatle associates, hangers-on and journalists have the best anecdotes or insights into the work of John, Paul, George and Ringo. Unfortunately, this is not really that sort of book.

Sandercombe has taken the complete-ist route instead, including a listing of every Beatle-related book published each year between 1963 and 2008. He then breaks them down again alphabetically by author and title. Many of the listings contain little detail about what’s actually between the covers of these books. Writing and photography/illustration credits and publication information are about all you get.

The other thing you realize quickly in flipping through Sandercombe’s book is that many of the books in the canon of works about the Beatles are utterly forgettable junk. But wouldn’t a volume that attempted to separate the wheat from the chaff more clearly have been much more valuable? Seems like Sandercombe could have been more selective or at least more critical and come up with a more useful or readable volume.

Which isn’t to say Sandercombe doesn’t express an opinion on anything. He says of Ray Connolly’s 1981 biography of John Lennon: “By a well-respected journalist and novelist, this is one of the few books published immediately after John’s death that is actually worth reading.”

About the massive and impressive 2006 publication Recording the Beatles: The Studio Equipment and Techniques Used to Create Their Classic Albums, Sandercombe says this: “A huge book and an incredible feat. Profusely illustrated hardcover.” Having actually held that book in my hands, I can tell you that Sandercombe is both right on the money and a master of understatement.

Sandercombe’s book could have used a lot more of his critical eye. There is no assessment made of seminal works like Geoff Emerick’s Here, There and Everywhere (2006) or Philip Norman’s Shout (1981), for instance. Of The Beatles Anthology, 2000’s voluminous coffee table book by and about the band, Sandercombe offers only a press release quote from the press officer for Apple Corps and this description: “A lavish production of photographs, conversations with the band and brief biographies, with cover art by Klaus Voorman.” Nothing about whether the weighty tome is actually worth picking up or whether it’s actually “the last word for the first time,” as the aforementioned Apple Corps press guy claims.

All that being said, there is some information of value here, primarily for hardcore collectors. Sandercombe occasionally weighs in on how to actually get hold of the books he catalogues here. Of a 2005 book about Pete Best he writes: “Not an easy book to find at any price.”

There are also occasional tidbits of interest here and there (and everywhere) throughout Sandercombe’s book. In a section on pre-1963 books tangentially associated with the band, he details how The Beatles were presented with a script treatment for a movie version of The Lord of the Rings in 1969, which they seriously considered making to fulfill their three-movie contract with United Artists. It was thought at the time that Tolkien’s epic tale of good vs. evil was a good fit as a comedic vehicle for the band, as the story was thought similar to Yellow Submarine. Of course the film was never made and Peter Jackson (and probably Tolkien too) breathed a huge sigh of relief.

Beatles scholar Sandercombe is also the author of two other volumes, one a catalogue of press reports about The Beatles and the other an A to Z encyclopedia of all things Beatles. So he clearly knows his stuff. And indeed this reference work might be worthwhile if you know exactly what you’re looking for and just need to know when it was published and by whom. But if you’re reading it for entertainment value or to turn you on to a great Beatle book you didn’t know was out there, this book probably won’t be much help.