with The Constellations, Bastard Lovechild of Rock ‘n’ Roll

Starting the evening with a G&T on an empty stomach was probably a bad idea, but wandering around the thickets of bars on a glorious Florida fall evening made it hard to resist. It tasted pretty good, but by the time I wandered over to The Social, I was fighting the urge to take a wino nap in the corner.

All that was swept away with the opening act, Bastard Lovechild of Rock n Roll. This duo takes minimalism seriously; their weapons are limited to a retro knob-driven synthesizer and a drum kit and bass that hid as best it could outside of their teeny pool of onstage light. Even with the completely silly stage names Cookie SugarHips (Chris Hess) and Hot Damn Sweet Huckleberry Winn (Adam Winn) they had some musical chops, and when they weren’t filling the room with an overwhelming 25 hertz feedback tone, they made some interesting sounds. They seem like talent in the raw and in need of some adult supervision, or at least a solid tune to let the audience wrap their heads around. 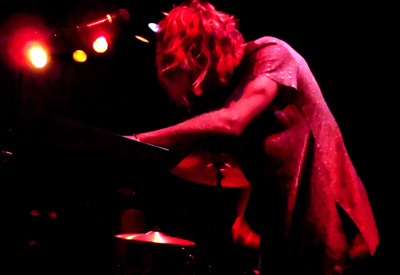 After the minimalism of the BLRR, the over the top feel-good sound of The Constellations was a pleasant surprise. They had eight people on stage, including two women on tambourine. There were two competing energy centers here: lead singer Elijah Jones and keyboardist Jamie Gordon, who took turns helping the drummer, humping the Roland, and bouncing off each other; and Gordon with his slicked back post-adolescence Peewee Herman look and Jones with a happy hippie munchkin style. Unlike the opener, these guys can write a tune and make it work on stage. With a large staff the tour can’t be making much cash, but I’ll bet they’re having a great time on the road. 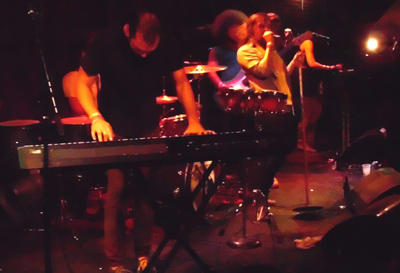 By now I was wide awake and ready to rock and roll all night, and the Electric Six came out right on cue. The leader of this pack is the nattily dressed Dick Valentine. He wore a shiny black suit and a Peter Zaremba hair style, and for some odd reason kept his back toward stage right. The set started out with a bang when he nailed the two killer cuts that open their recent Zodiac CD, “After Hours” and “American Cheese.” Valentine insists his songs “are about nothing,” but “American Cheese” sure sounds like a guy who lost some friends in a bath house. That’s the odd thing about Electric Six – their big hit was “Gay Bar” and there’s an alternative lifestyle thread in their music, but neither the band nor the enthusiastic crowd seem very gay. It was the usual black tee shirt hipster crowd with long suffering girlfriends in tow – they cheered and pumped fists as Valentine strutted around, wielding his mic stand like a weapon. There were some close calls, but he never actually struck anyone in the band or the crowd. 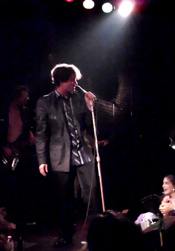 After counting down five songs, he complained that he had met the label-mandated minimum quota of songs from the new disc, and he was off into a popping set of old favorites including “Dance Commander” and “Danger! High Voltage.” As the midnight hour approached, no one was leaving early, and a few actual lighters and an LED flashlight or two brought the boys back out. The first encore number was their recent cover of Bootsy Collins’ old disco chart topper “Rubber Band Man,” and they wrapped up with a way too short “Gay Bar.” These guys should have played another hour, but I think the staff at The Social had a school night. A hot band in a small room, how could it be any better?