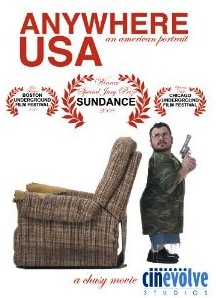 It took a while to get though this triad of semi-related stories by hotshot director Chusy (Chusy Haney-Jardine). While it’s a comedy, it’s no Adam Sandler painful laugh fest – the humor is subtle and situational and full of generalized weirdness. In the first of three stories, an odd and slightly abusive romance between Tammy (Griffin) and Ellis (Robinson) pokes along like an RV on a two-lane highway. Ellis finds Tammy looking at cocks on the Internet, and she does some online dating with a Middle Eastern looking fellow (Rafat Abu-Goush). Ellis and his R/C racing midget buddy (Fox) bug Tammy’s room and decide her date is a terrorist. He’s not, but they shoot off Ellis’ balls anyway. Bloody crotch = big laughs, or so Mr. Haney-Jardine hopes.

We now follow stoner Jeremiah (Jeremiah Brennan) who “accidentally” puts his niece (Perla Haney-Jardine) in a realtor’s car where she eats some pot brownies and suffers a crisis of faith about the tooth fairy. Everybody must get stoned, and the tyke’s faith in the faithless is eventually restored. Lastly, the patriarch of a cartoonishly wealthy family suffers a momentary hallucination that involves meeting black people and buying them lunch. Yes, it was all a bad dream, and no scary ethnic types will come anywhere near his 5,600-square-foot Ashville mansion unless he pays them to mow the putting green. And then, Deus Ex Machina, all these people are related somehow which might tie up all the loose ends in this film, but fails.

At first I thought “OK, I’m missing some subtle cinematic trick,” so I cheated and looked up the user reviews on IMDB. They were split – a bunch of super low scores, a bunch of super high scores, nothing in the middle. This movie falls into the same file as Morrissey, Supertramp, and Andy Kaufman – I just don’t see the appeal. The pacing is glacial, with only the midget saving the day. Tammy and Ellis do have a fetish I’d never heard of (she beats him with a tennis racquet while he’s in the shower), but it’s not a really good fetish. The lost girl story leaves open more questions than it answers, and watching rich people fantasize about slumming is never as much fun as going with them and actually doing it. The only redeeming feature on this DVD is the director’s commentary. Here, Chusy explains each nuance and cinematic decision. THAT I found interesting; had he replaced the awkward dialog with his own stream of editing consciousness, he would have had a brilliant movie. Your mileage may differ – there are some rabid supporters out there, but at least you’ve been warned.