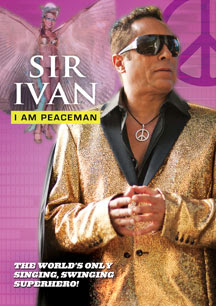 Sir Ivan: I Am Peaceman

Great artists often begin with a modicum of cash and boatloads of talent. Sir Ivan works backward: he has boatloads of cash and a modicum of talent. Does he have a back story? Sure. Dear Old Dad survived Auschwitz then came to America and ended up rich. Banking and oil did the trick in this American Dream but poor Ivan had to put on a suit and shake hands with the moneyed, and it drove him nuts. When dad died the bank was sold leaving Ivan with cash and time to spend it. He picked up a cute Japanese girlfriend (Mina Otsuka); she designed him a cape bearing a peace sign made from genuine sequins and soon Sir Ivan was “A New York Personality.” This documentary follows him as he plans and hosts a massive party at his Gothic mansion in the Hamptons. With enough money any assault on good taste is tolerated, and this place looks vaguely like a White Castle built on a shopping mall scale. Along he way we meet his mom who had taken to collecting erotic art, his micro-dog that poops on a red carpet, and the small task force of people who clean up the dog poop, drive his capes across the county, and help him apply his entertainment skills to advance world peace.

At 53 minutes this seems like a made for TV infomercial; it feels like Sir Ivan has his heart in the right place but his videos are rather embarrassing to watch. Stylistically they feel like they were designed in the early days of VHS yet executed in glorious 1080 Blu-ray. This documentary spans several years (IMDB.com shows 2013 as the release date on this project); Sir Ivan clearly puts on weight as time passes and his drinking steps up as well, and we never really understand his strategy to bring about world peace except via self-aggrandization. His plan seems the sort of vague yet well intentioned “Can’t we all just get along?” that infuses uplifting children’s videos. Mostly this is a documentary of a middle-aged man doing his level best to dissipate his father’s fortune living the Guido lifestyle writ large. On that front he’s doing well, and it IS morbid fun watching Ms. Otsuka get a cast made of her boobs to grace a statue overlooking the infinity edge pool at White Castle Estate. I don’t know how that advances world peace, but it sets back good taste by several decades.