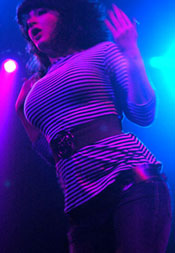 It’s a Friday night – I worked all day, traffic was a bitch, and finding a parking space is nearly impossible at Downtown Disney. So why am I still smiling? Because I’m on my way to see The Sounds, a Swedish product more intoxicating than Absolut Vodka.

But before I can bask in their infectious beats, Action Action gives us a whole lot of keyboards (3 of the 4 bandmembers had their own keyboard set up that they took turns playing) and a bit of guitar. An honest effort, but nowhere near as memorable as Morningwood’s set of debauchery. 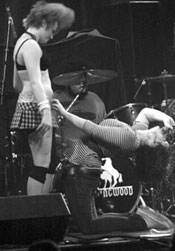 Chantal Claret is the voice, the face, the tits, and the attitude of the comically titled Morningwood. From her first moments onstage she was shaking her shit like a banshee on speed. In 30 minutes time she managed to molest a security guard ( “I love the House of Blues’ security – they’re so cute!” she confessed after riding one bouncer piggy back style along the foot of the stage), urging a couple to strip and “declare their love in front of the audience” onstage, and for the finale… during the song “Take Off Your Clothes,” she brought a young girl onstage and ripped off her shirt, tore her stockings off with her teeth, and then erotically licked her thighs and stomach. If that’s not entertainment, I don’t know what is!

After, Claret camped out at the merch table to sign autographs and greet fans, of which there were plenty. To me she wrote “Chantal wants a good review!” Well, baby, you didn’t need to ask for it because you were already gonna get one! 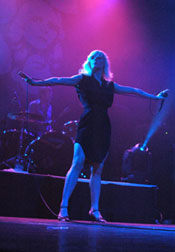 When seeing The Sounds it’s impossible not to be struck by the raw sexiness of singer Maja Iversson and her Tina Turner legs. She’s walking proof for the cliché that Sweden is a country of beautiful people! So when the band first comes out, take a moment and just soak up the gorgeousness – then take a breath and get ready for an hour of feeling like a teenager again. Drinking, dancing, and hooking up. For The Sounds are the band you wish had played at your prom. 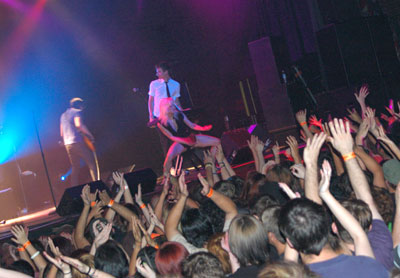 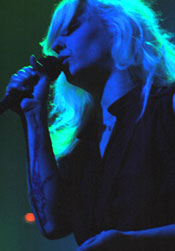 The band let Iversson work the crowd into a frenzy (at one point diving into the adoring fans, to then ask the audience, “Is everyone ok? I didn’t hurt anyone, did I?” Maja, I doubt that anyone is complaining!), while keeping the sound as tight as on record. The impeccable set ended with an encore and a final electric drum solo, by guitarist Felix Rodriguez and keyboardist Jesper Anderberg, at the edge of the stage.

The Sounds plus Morningwood equals one hell of a sexy tour!