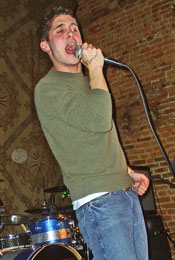 I stood outside the entrance of the North Star Bar, eagerly anticipating the door opening. It was bitter cold and only eight people (including myself) were standing in line. Yet, 6 p.m. came and went and there I stood, shivering. From what I heard later on, Men, Women & Children got lost somewhere in Delaware, setting the show back an hour.

Finally, at 7:30 p.m., doors opened. The line had swelled to a pretty great size, considering it was the day after Christmas. Fans clutched their tickets in hand; they waited to show them to the door guy. The first one hundred of us received a free CD, courtesy of the band.

I walked to the stage with my friend, shocked at how small the venue was. Considering the place is used mostly for 21+ shows, I had never attended a show at the North Star. It must have been one of the smallest places I’ve attended. I secured my spot stage right and went to introduce myself to the opening acts. 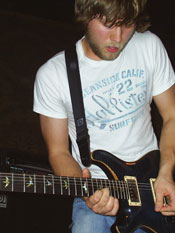 Brittany Sturges
Jake of the Scenic

The two opening acts, More Like the Moon and The Scenic are both from Philadelphia. It was a nice suprise for me– I love when bigger names get some local bands to open for them. I happened to get another demo, this time from the Scenic, and chat with both drummers.

At 8 sharp, More Like the Moon took the stage. With a powerpop-indie feel that was probably the most mellow of the three acts, the guys were a complete 180 from the Men, Women and Children sound, but not bad at all. The crowd contained some of their fans; it was refreshing for an opening act to not have to play to a room of kids with somber faces, standing on the walls. The band played six songs and were off the stage fairly quickly. 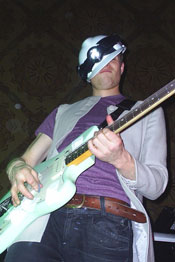 Next up was the Scenic. I had heard of them through the guys of MLtM, but didn’t get a chance to check out their sound before the show. I have to say they may have worked their way into my heart. With sarcasm and some amazing beats, the Scenic had me hooked at the second song. Their guitarist’s (Jake Sciscio) performance was jaw-dropping; I may even go as far to say that he’s better than some label acts. Their drummer, Shane Reynolds, stood out as well, pounding on the drum set with a raw intensity that was quite refreshing. They played a six-song set as well, and I vowed to check out their demo as soon as I got home.

The bands started to take apart their equipment and MWC set up. Fans seemed happy– it would be a quick soundcheck and the show would go on, running about 45 minutes behind schedule. Yet, there were problems with the bass and the MWC set began close to 9:45– 45 minutes after the Scenic had left the stage. Fans appeared to be growing restless. Finally, the guys of MWC left the stage, all their equipment in place. The lights went out as the fans cried out. The band took the stage to their delight.

Now let’s get something straight. This was my fifth time seeing Men, Women & Children; each time I see them, I walk away, vowing to never listen to their music again. I like the synths, I like the whole electronic sound… but there was something about the band that irked the hell out of me. Maybe it was the fact that they threw bananas into the crowd during their song, “Monkey Monkey Men,” or maybe it was the fact their stage performance seemed utterly absurd to me. Either way, everytime I saw them (the last being at the MTV $2 Tour on Halloween) I found myself swearing it would be the last time… 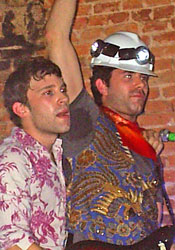 So it was bit bizarre for me to be here, right? Well, either way, I was there and I think I can finally say that the New York-based band have finally won me over. Now that doesn’t mean I’m rushing out to buy everything that has their name plastered on it or anything like that, but I can finally say that I appreciate them. Maybe it was because they were playing a small venue that was packed with their fans. Or maybe it was that they started a massive conga line mid-performance, chanting “Ain’t no party like a Philly party…”

Whatever it was, it worked. It won me over. No one was trying too hard and the fans were screaming the lyrics, dancing their little hearts out in the very limited space they had. The neon lights and the bubbles made the show all the more wacky– but then again, Men, Women & Children aren’t your average band. They’re more of an acquired taste, but once you get that taste, you may find yourself wanting more.

The show ended at 10:40– not too bad, considering the whole thing ran an hour behind. The band was extremely gracious, repeating over and over again how thankful they were to the fans who came out to see them.