One Lone Car is an alternative rock band based out of St. Louis, MO. The band is composed of Dei Plegge (vocals, guitars, keys), Andy Herrin (drums), Neal Klein (guitar) and Michael Hickey (bass). After receiving a copy of their 7-track EP, Variety Half Hour, I was able to talk to Andy and Neal on the phone about a variety of things, despite some technical difficulties with the speakerphone. 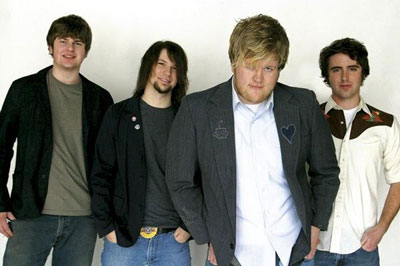 How did the band meet?

We were all in different bands, but we all knew one another. After the bands broke up, we got together– it was back in the summer of 2004.

Where did the name “One Lone Car” come from?

Dei was on his way to Orlando, FL to do some recording. He was on a night flight; at one point, he looked out the window and all he saw were two headlights. One lone car. It was originally lyrics in one of our songs, but we later dropped the song.

Now you’re an alternative rock band… what’s the St. Louis scene like? How do you fit into it?

There’s a movement going on. Things are a bit more emo and metal. Our sound is rare; it doesn’t really fit the mold here. There are more bands– decent bands– appearing and a lot of venues are springing up.

There’s a lot of diversity in the ages of the audience, from high school kids to people in their 40s. We prefer all-ages shows. We don’t like to alienate fans because of their age. 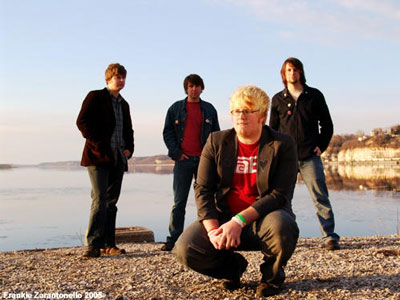 If you could ask your fans one question, you’d ask them…

Who’s the most attractive person in the band? (laughter from Andy and Neal) In all seriousness, we’d probably ask them what they like and dislike about the band. We want criticism; we already take it in stride.

You have gotten to open for some pretty big names, including Flickerstick, Gravity Kills and Wheatus. Is there anyone you would love to open for that you haven’t gotten the chance?

Now let’s talk about the MTV thing. I read that one of your songs, “Souvenirs,” was played on MTV’s Parental Control. What exactly was going through your head when you saw it?

Actually, all of our songs have been played on Parental Control now. We’re all big MTV fans, so the whole thing is a little surreal.

The songs came off the EP, Variety Half Hour, correct?

Yes. We recorded it back in the summer of 2005 for a few weeks in a St. Louis studio. We did it ourselves and cut some costs.

If the band were to somehow wind up on a desert island for a week or so, what would happen?

Is there beer on the island? (laughter). We would just hangout. There would probably be some fights. In the end, only two of us would make it off… accidents happen. (more laughter)

What’s with the band’s site? When I visit it, I wind up right where I started– your myspace page. What happened?

Our website was shut down and our webmaster mysteriously vanished. (laughter)

What’s the next six months look like for the band?

There will be a tour– a lengthy one. We’re also working on the next CD. We’re also in talks with MTV about possibly having more of our music played in other shows.

With their songs being played on the MTV circuit and college radio stations across the nation, One Lone Car is a band to keep your eye on. For more information on them, check out their myspace at www.myspace.com/onelonecar.