Chimaira, He Is Legend

I’ve always associated No Fear clothing with jocks and preps. I don’t know that I’ve ever seen a metal kid wearing one of those silly slogan t-shirts, yet somehow the clothing line has sponsored a tour headed up by Killswitch Engage and Dragonforce and co-starring Chimaira and He Is Legend. The tour stop in Orlando sold out prior to the night, making for some very happy scalpers ‘round the box office getting $80 for for a $23 show. What I witnessed inside the hall may not have justified such a steep hike in price, but then, I’m a tough sell when it comes to the heavier shows. 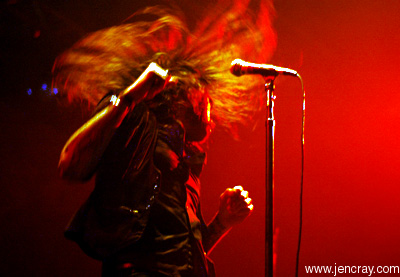 Jen Cray
He Is Legend

I’d like to pretend I didn’t hear He Is Legend described as Christian metal because then enjoying their opening set will make me feel hypocritical and dirty. So from a strictly musical and performance standpoint, I will say that HIL were a bit like The Sword with an adrenaline shot and held me for the 30 minutes they had to give. They play classic rock fused with metal, and frontman Schuylar Croom thankfully sounds less emo live than on record. His voice was scruffier and more road worn than expected, and his stange stance more confident. 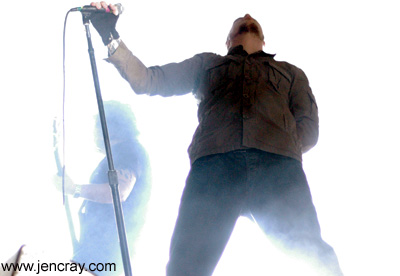 The last time I saw Chimaira, they gave an impressive effort opening for the mighty Danzig on his Blackest of the Black Tour. The minimalistic stage they dominated on that occassion was child’s play compared to the jacked-up Chimaira that stormed the stage on this night. Mark Hunter had all the growls and grimaces that lead his Ohio band of angry miscreants with the added pose of a rockstar on a big rock tour. I don’t mean that to be accusatory, either; there’s nothing wrong with a rocker embracing the state of rockdom onstage. It’s a show, and no matter how sincere and real the music is, the band is there to entertain the audience, so I see nothing wrong with smoke machines, strobe lights and even a lightning globe onstage to add effect. It didn’t seem like the crowd would have argued with me on that point either – they were eating it up.

London’s prog metal aces, Dragonforce, are quite a spectacle. Dueling guitars, lots and lots of hair, big jumps, big poses and complex epic songs gone over the top with the Bruce Dickinson-inspired vocals of ZP Theart. It’s all about bringing the pomp back of the days of Iron Maiden and not a small measure of Journey. Herman Li, the asian guitar guru, is the clear crowd favorite, as every solo he puts out garners heaps of applause.

After three strong acts that satiated any metal urge I had for the night, I decided to not stick around for Killswitch Engage, opting instead for beating the drunken masses to the roads.