Assassination in Rome / Espionage in Tangiers

Assassination in Rome / Espionage in Tangiers 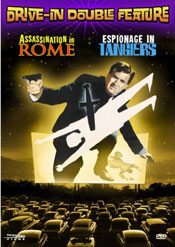 B-movies are like zombies: you can never really kill them, and they seem to keep coming back over and over. Drive-ins, Late Night UHF, Elvira, MST3K and now DVD reissues complete with movie trailers keep sucking a few bucks from the bored and easily entertained here and there. You’d be shocked at how many of these I got for Christmas from baffled relatives unable to come up with novel gift ideas for me, like booze or cash.

I’ll start with the stylish Greg Tallas film Espionage in Tangiers. According to IMDB, this was George Lazenby’s first film, but he was completely cut out of it. Espionage in Tangier did well in Europe, featuring the self-assured Mike Murphy (Luis Davila) searching for a stolen atomic death ray gun. The gun is a McGuffin, and the action revolves around the 3 B’s of spy movies – Blonds, Bullets and Bombs. The plot is reasonable, even featuring a moderately sophisticated water torture chamber. I find the look wonderfully dated with bouffant hairdos on retro sexy women, great camera work on good-looking locations and very hip-looking sets. The dialog is a bit hokey, and there’s some serious bitch-slapping foreplay, but I’d put Luis Davila up against Sean Connery any day.

These disks are set up like a semi-authentic night at the drive-in, with a good collection of vintage drive in shorts for all the grotty snack bar fare people ate back then. The timing is good, with just enough filler to pop some Orville Redenbacher, stop in the John and grad a fresh Bud Light.

The second feature is not nearly as good, so if you’re planning to make out on the couch, here’s your cue. Assassination in Rome stars 1950s beefcake Hugh O’Brien and a wooden Cyd Charisse, who could have been the prototype for Joan Crawford in Mommie Dearest. Cyd is in Rome attempting to patch up a failing marriage, only to find her husband missing. Although he was a respected scientist or business man or real-estate broker, he found himself in the heroin trade and nearly beaten to death. The plot is convoluted and rather dull except for an interlude with a pair of bumbling crooks who don’t seem to get a credit anywhere. This film has more of a travelogue feel, and the look isn’t nearly as intriguing as Espionage.

These are classic spy movies, the sort of material the Bond franchise embellished to the point of ridiculousness over my life time. These are reasonably entertaining, sort of like flipping into a pre-advertising AMC. If only they gave Cyd a dance number…