by Alice Cooper with Kent and Keith Zimmerman 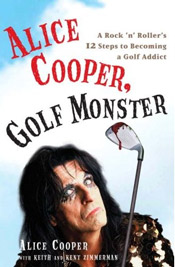 Golf Monster: A Rock ‘n’ Roller’s 12 Steps to Becoming a Golf Addict is the name of a new biography written (with probably more than a little help from identical twin writer team Kent and Keith Zimmerman) by legendary rock star and avid amateur golfer Alice Cooper. Golf Monster isn’t so much a follow-up to Cooper’s 1976 autobiography Me, Alice (written with Steve Gaines) as it an engaging collection of anecdotes on how he recovered from years of chronic alcohol abuse through his obsession with the game of golf. The chapters trade off in regards to subject matter: a chapter about music, a chapter about golf, chapter on music, chapter on golf, music, golf, and so on. Between the golf narratives in the first half of this well-written book are Alice’s stories and personal memories of what I like to refer to as “the gory glory days of the Alice Cooper Shock Rock Band” – a group of five men who wrote and recorded timeless and immeasurably influential rock albums such as Love It To Death , School’s Out, Killer, and Billion Dollar Babies. A lot of people who don’t know their rock history hear classic Alice Cooper songs like “I’m Eighteen,” “School’s Out” and “No More Mister Nice Guy” and refer to the artist as a “he.” But they are mistaken. From 1968 to 1974 Alice Cooper was not a he: Alice Cooper was a band.

For the past three years I’ve been in a partnership with Neal Smith, who was the drummer in the original band called Alice Cooper. We are writing Neal’s own biography and history of his days with Alice Cooper and, believe me, the book has been a whole lot easier to write thanks to Neal’s relatively clear memories of his life over the past forty-something years. Not only does Neal enjoy the benefit of better recall thanks to never having been a drug addict or alcoholic, he also has the ability to back up that memory with pristine journals he kept and letters to and from family members, along with lists of show dates, tour destinations and people that he and the rest of the band crossed paths with as they rose from obscurity to international superstardom. My point is that I know my Alice Cooper history, because one of my best friends was there at the time not only living it but writing everything down. That said, it was evident to me thirty pages into the book that Golf Monster, which is being touted as a true-life story, is largely a work of fiction.

While there’s enough name-dropping in Golf Monster to make even the casual fan’s head spin, it doesn’t take a Rhodes Scholar to notice the glaringly obvious fact that nearly every famous person with whom Alice claims to have enjoyed infamous encounters has one thing in common: they’re all dead. Seriously, take a look at the list of his cohorts in the pages of Golf Monster: Janis Joplin, Jim Morrison, Frank Zappa, Elvis Presley, John Lennon, Harry Nilsson, Syd Barrett, Peter Sellers, John Belushi, Salvador Dali, Vincent Price, Andy Warhol, Groucho Marx, George Burns – I could go on and on, but you can see what I’m getting at. It’s easy to say whatever you want when those who can refute your stories are six feet under. And while the only people who’d be able back the veracity of any of Alice’s golf stories are Alice and those he mentions in the book, people like Tiger Woods probably have more important things to do with their day than take a philanthropist and “nice guy” like Alice to task over spinning a few Tall Tales. But considering there are holes in his recollections of what went on in the original band that are gargantuan enough to drive a tour bus through, I tend to err on the side of belief that his golf stories here are “for entertainment purposes only.”

Here are just a few examples of band-related stories in Golf Monster that are close to if not 100 percent bullshit:

Alice talks about how an early version of AC, The Spiders, with drummer Neal Smith, moved from Phoenix to LA to get famous. Actually, Neal was never a member of The Spiders and only joined The Nazz (the group’s name prior to becoming Alice Cooper) as their drummer after that band had relocated to LA.

According to Cooper, when The Nazz learn that Todd Rundgren also has a group by that name and are forced to find a new band name they settle on the name “Alice Cooper” because Vince (Alice’s real name) just thinks it sounds like a good name! The true story involves a session with a Ouija board at which Neal and Vince were both present, and is infinitely more interesting. You can read all about it in my book!

In Alice’s version of reality, Jimi Hendrix introduced Alice Cooper to their future manager, Shep Gordon. What really happened is that band managers Gordon and his partner Joe Greenburg (who, mysteriously, is never even mentioned in this book) were introduced to the band by Cindy Smith, Neal’s sister.

Is Alice doing any real harm by fabricating the truth and rewriting history (something he’s been doing pretty regularly for the past 35 years)? Probably not, but there are certainly innumerable passages in Golf Monster that would make the surviving band member’s heads explode. But I’ll give Alice props for doing right by Neal, bassist Dennis Dunaway and guitarists Mike Bruce and the late Glen Buxton in one significant way: he does put it out there that (originally) “Alice Cooper” was “a band, not a solo act” and he does consistently refer to the band as “we” in so far as giving all five guys in the band credit for the accomplishments of the band – something I know he isn’t always so quick to do verbally.

When recalling how he handled press interviews in the early days of the band, Alice admits that he had no idea what he was doing and just “made it up as we went along.” And who hasn’t heard about him spreading “harmless” falsehoods like the “confession” that he actually played the character of “Eddie Haskell” on Leave it to Beaver – which is something he said just to stir shit up. Based on what I’ve read in Golf Monster, it sounds to me like Alice is still making it up as he goes along.