The Girl With The Golden Shoes

The Girl With The Golden Shoes 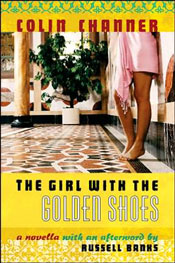 With hundreds of writers, filmmakers and playwrights adding their respective twists on the coming of age story each year, it is amazing that anyone has the time or energy to come up with a new, heretofore unseen view on a character’s shaky and often troubled steps towards adulthood.

Yet, with increasing regularity new voices gently float above the din and, thanks to the ever-growing access to the work of artists from even the most remote corners of the globe, a great number of those voices belong to non-Western speakers.

So it is that we American readers have been blessed with Colin Channer, a young writer of Jamaican descent, who acknowledges the archetypes of this kind of story, but adds a tart, sunbaked world view to it which invigorates the tale, giving it an exotic and dangerous spin only hinted by his contemporary peers.

The character that Channer gives us to follow in this story couldn’t be more marginalized nor on the outskirts of the society that she was raised in. If being a young black girl living on a small Caribbean island during World War II weren’t enough, Estrella Thompson is also not very well-regarded within her fishing village. She was brought there by relatives to stay with her grandparents after her mother died giving birth to her. In a culture rife with superstition and fanciful religious fervor, this marked the girl as an outsider, a status that has been amplified in the ensuing years due to Estrella’s her headstrong attitude, curiosity and her ability to read.

It is her curiosity that is her undoing within the village, as a chance meeting with a military diver (whom the rest of the children fear is a monster) that coincides with a drop-off in luck for the fishermen is enough to force Estrella out of the village. Although she is angered by her ousting, the decision crystallizes her focus, leaving her only one concrete solution to her bad fortune: she needs to find her way to the town of Seville, buy a pair of shoes and then get a job.

The rest of the novella is taken up with Estrella’s journey, an arduous trek filled with unsavory characters and situations, and it is in the latter two-thirds of the novel that Channer’s prose truly takes wings. He imbues each step with nods to Estrella’s fellow wanderers (Dorothy, Don Quixote, Dante) and packages each page with rich sensory details that put a gentle haze over each scene. As well, Channer is able to move swiftly between the fractured English of Estrella’s inner monologue to straightforward narration to the myriad of dialects and languages of each character with an ease that neither confuses nor alienates the reader.

What is especially striking is the way Channer subtly shows the changing spirit of Estrella. She is still as iron-willed and singularly-focused as she is at the beginning, but little shifts in her vocabulary and tone give her even more depth as she moves through the story. By the end of the book, her English is still cracked, but she feels wiser and more assured having been able to mix the knowledge she has gained through her books with what she gained by tactile experience.

Although the book’s brevity is to be admired, it is also the book’s undoing. The ending feels a little too pat and quickly wrapped up. Although anyone who understands the culture and time period in question knows that Estrella’s story is far from over nor will it be a journey free of troubles, still it would have been a much stronger story were that explored or the story ended more ambiguously.

That being said, The Girl With The Golden Shoes, is an otherwise spotless book by a writer of rare talent and voice. With Channer’s age and abilities, I doubt we have heard the last of his storytelling and the literary world is better off for it. There are too few voices speaking from the margins as strongly and lovingly as Channer does in this book.