Valencia, All Time Low, The Audition

It’s funny how much a band can change in a little less than a year–this can be said for Massachussetts band, Boys Like Girls. Having heard their debut effort, Boys Like Girls back in 2006, I was unimpressed with their lack of originality on the songs. Musically, they weren’t awful–they just sounded like any other emo band on the market. Been there, heard that. Now, their video is in the MTV rotation and they’re selling out shows internationally. 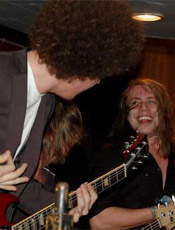 Boys Like Girls brought their Tourzilla tour to the Electric Factory and were able to sell out the medium-sized venue (I wasn’t surprised). As I walked into the venue, people were crammed as far front as they could go; the people by the barriers were still unwilling to move, proudly claiming their perseverance to get a front row spot.

Hometown favorites Valencia were in the opening spot–how, I don’t know. Besides being the headlining band, Valencia was the band to get the largest reaction from the crowd. In fact, very rarely have I seen the opening act get such a stimulating reaction from the crowd. Their set seemed to last only 20 minutes, as the band played material from their new release, as well as some crowd favorites from This Could Be a Possibility. I’d much rather have seen them play longer than to have additional bands on the bill. 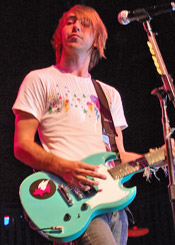 The Audition was somewhat disappointing. While the band gave the audience a taste of songs from their upcoming release, it was hard to top the crowd reaction that Valencia had. I’ll be the first to admit that I expected to be a bit more impressed by this Chicago band’s set.

Next up was All-Time Low. The guys walked onto the stage, as Soulja Boy’s rap single “Crank That (Soulja Boy)” blasted from the speakers; the screams grew more deafening with each act. The Maryland pop punk act was enough for the screaming crowd, their stage presence bursting with energy. Watching from the sidelines, I’ll be the first to admit, though not my choice of band, All Time Low put on a decent performance.

Bostonian-emo band Boys Like Girls took the stage, welcomed by screams from the sold-out crowd. The band began to play various tracks from their 2006 self-titled CD. While the band’s musical abilities weren’t the worst (then again, they were rather mediocre), I grew to wonder why the band was still holding on tightly to this release–why release the deluxe edition of the same album instead of shifting to new material? I guess the old saying “if it’s not broke, don’t fix it” might apply…but sooner or later, this album will be well past its expiration date. It was only a matter of time before the annoying power-pop riffs of their singles, “Hero/Heroine” and “The Great Escape” would flood my eardrums. Oh boy.

In the back of the venue, people were scattered in groups. Instead of focusing on the band, their attention was diverted to the television screen. While the crowd up front was cheering over every move that spiky-haired singer Martin made, people in the back were opting to root for the Philadelphia Eagles as they played against the New England Patriots. At the rate this show was going, I would have rather been watching that, as well.