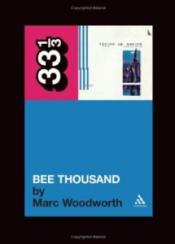 The documentary Watch Me Jumpstart took on the whole pre-_Alien Lanes_ Guided by Voices in 60 minutes. Marc Woodworth unspools just one album – the admittedly fantastic Bee Thousand – in no less than 156 pages. But then, a picture is worth a thousand words.

Writing about a book that’s written about a record is like the Ouroboros – the snake eating its own tail. It’s an echo chamber of ideas that becomes a deafening feedback loop of new ruminations on old ideas, all at once, both a tidying up and deconstruction. In this way, the exercise becomes a neat metaphor for the album, itself composed as deconstructions, ruminations, and feedback loops of old ideas. Woodworth goes to great pains to illustrate this, with his deeply philosophical look at the work, brazen enough to observe that primary GBV architect Robert Pollard’s own words don’t satisfy the hungry enigma that is Bee Thousand.

Woodworth’s obsession with his subject is inspiring, and can stand alone as the album in book form. Highly manic and literary, Woodworth’s writing suffers a little for its breathiness. He piles on dependent clauses and struggles to articulate why this album is so important that it merits his scrawling out 156 pages of ink, getting lost in micro-examinations of simple statements such as Pollard’s response to an invitation from Matador Records to make an album. Pollard’s simple answer, “I think I can make something happen,” gets a full two pages of exploratory prose.

However, if Woodworth is occasionally overwhelmed by the magnitude of his undertaking and sometimes struggles with brevity, his literary account of a very slippery album is fantastic for being just as cut-and-paste and brilliantly rag-tag as its namesake. By intercutting his own essays with interviews with the band members, listener responses, and an excerpt from a fantastic academic dissertation on GBV, he creates a book that is dizzying in its detail, while commendable in its devotion.

33 1/3’s Bee Thousand is accurate in fact, but also poetic in its fiction, weaving together a tale from disparate statements and false starts – much like Pollard does when he writes lyrics out of fragments of conversations. Exhausting but worth the effort, whether you’re a Guided by Voices fan or not.