If there’s a living museum of Olde Tyme Radio, it’s “A Prairie Home Companion.” Thirty five years ago, Garrison Keillor convinced Minnesota Public Radio to broadcast a show that mirrored WSM’s “Grand Old Opry,” “The WGN Barn Dance” and a dozen other live weekly variety shows. His blend of gospel music, cheesy ads and corny comedy amused Middle America then and it still does today. That made the absurdity of paying to see a live radio show in a big screen cinema the perfect frame for this uniquely American entertainment. 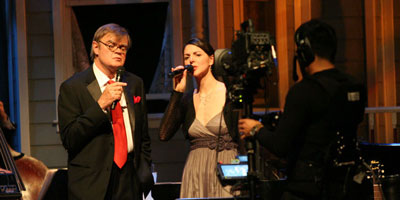 We open with a pre-show walking tour of St. Paul. On a snowy, slushy evening, Keillor explains the landmarks and local hangouts of his career, picks up some popcorn and then buys a red tie and scarf for the show. As we cut to the interior of the Fitzgerald Theatre, he enters from the lobby in a tuxedo and red sneakers singing his signature “Tishomingo Blues,” and once again “A Prairie Home Companion” is On The Air.

Keillor’s hypnotic baritone and dry Midwestern humor anchor the show, and tonight he’s booked a solid roster of guests – Elvis Costello along with Jearlyn and Jevetta Steele, Erica Rhodes, regulars Robin and Linda Williams, and Heather Masse. Costello was a particular treat; he did some swing, some incredibly mournful ballads, and contributed a snarky English accent to the Guy Noir segment. The Steele Sisters sang gospel and Beethoven, and joined Keillor the notorious “Coffee Song”: “… it keeps the Swedes and the Germans awake through the Sermons… “ Yes, indeed, we are back in central Minnesota, and damn proud of the snow and cold. 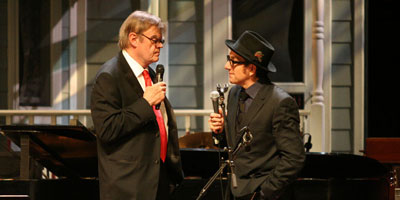 So what does radio really look like inside? It’s a sort of audio ballet, with technicians swiftly changing microphones as Keith and Newman making an instant improv audio sound track for the show. The pros tossed completed script pages on the floor as they went along, while Costello tucked them neatly at the back of his bundle of papers, perhaps to keep as a souvenir. Keillor always seems in complete control, but as he did his signature “News From Lake Woebegone” he wandered the stage, sat on a park bench, and stared at his fingernails, as if the story was implanted on a microdot under the quick of his left thumb. For all we know, it is.

Technically, the show looked gorgeous. The audience was well-dressed, the lighting subtle but effective, and the cameramen nearly invisible. There were occasional audio artifacts from microphone levels, and the video dropped for a few seconds, but otherwise the HD video lived up to all its hype, filling the big screen with a bigger-than-life picture. If there was any pixilation, it passed quickly. Interestingly, the show ran about 10 minutes long, an inexcusable fault for a network radio show. The audio track from the Cinecast is on the regular Saturday time slot for the show, and some blunt editing work has pulled it back into line. 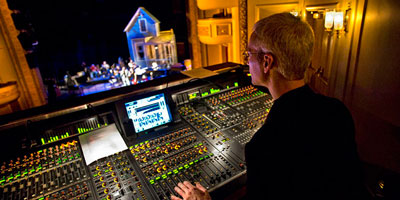 Keillor had a small stroke a few months ago, and his left eye lid seemed saggy. After a third of a century on the air, there’s now a feeling that “A Prairie Home Companion” might actually end some day. That sense of mortality has always imbued Keillor’s work, and that thought resonated as he sang his way out through the stage left aisle. As technicians in the lobby scattered to get off camera, he left his microphone and walked off into the cold Minnesota snow. As he said in the 2006 movie version of the show: “Every show is your last show.” Not tonight, but soon, too soon.