You Really Got Me

You Really Got Me: The Story of the Kinks 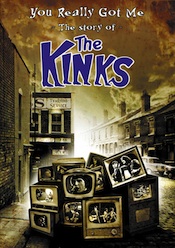 There are rockumentaries and there are concert videos and then there’s this curious hybrid. The Kinks were one of the enduring bands of the British Invasion; despite the internecine issues between Ray and Dave Davies, this band has hung together and produced hits nearly as long as The Rolling Stones have. ABC entertainment (not the guys who own a TV network) pulled together an amazing collection of vintage kinescopes, videos, and concert footage plus the occasional snippet of an interview, creating a somewhat comprehensive history of these Britpop stalwarts. The video is high quality; the sound is either original TV audio feed or band documentary video right off the mixing board. Snippets of commentary pop up occasionally, but unlike so many documentaries, the songs typically play through. The announcer is unidentified, but sounds vaguely like Casey Kasem.

More and more factual information appears as the show progresses, starting with the Kinks’ four-year ban from entering the US in the late ’60s. No reason was given by the band or the State Department, but the boys look completely stoned and I suspect it might be related to their obvious use of the demon weed. With its headline-like commentary, this collection is great for listening; few annoying voiceovers interrupt the music. There’s just one gaping omission – while we hear several versions of “You Really Got Me,” never does a wisp of “Lola” appear. Say what you will about 1970s cross-dressing songs, this is one you really want to see them perform live, and it’s missing. That’s really the only flaw I see in this collection, and even if you’re not a huge fan, this is a music connoisseur’s collection of rock and roll history.