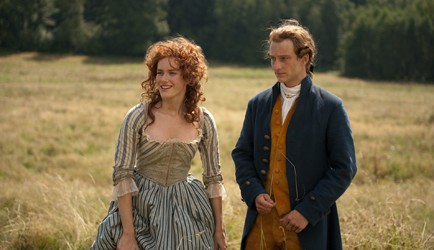 Perukes and powder and arranged marriages are the backbone of period romances. Turn off the subtitles and sound on this slick flick and you’d think you were in regency England, but today we explore the heart of old Germany where tiny kingdoms struggled over goat pastures and ancient pretentions.

Johann Wolfgang Goethe (Fehling) flunks out of school and his father packs him off to rural nowhere to be a law clerk. Typically dissolute, he and his roomie Wilhelm Jerusalem (Volker Bruch) have a very ambiguous nude bathing scene, but spend the rest of the movie drinking, tearing up the town, and chasing women. They both hook up with mixed results: Jerusalem takes a shot at a married woman, while Goethe clicks with the contralto in the church choir. Lotte Buff (Miriam Stein) is a fiery girl with a widowed father and a dozen or two siblings. Of course there’s a complication – Goethe’s boss Kestner (Moritz Bleibtreu) is negotiating for the hand of Lotte but she quickly falls in love with Goethe. Worse, her castle walls have already been breached. There’s a duel, a near suicide, and plenty of tears, until Goethe has only one option open – write his first hit novel and found the Romantic Movement. To this day young lovers are killing themselves over this man’s writing.

While there is little cinematic ground broken here, the story is completely engaging, Goethe will steal your heart, the countryside is gorgeous, and Lotte knows how to wear her push up Wonder Dirndl. Fehling often seems much too full of himself, but so was Goethe. His supporting cast never lets him down; Bruch’s Jerusalem is a fine boon companion who looks like a younger and more polite Ron Jeremy. Bleibtreu is brittle and officious, and when he unwittingly asks Goethe for help wooing Lotte, Goethe tosses off some brilliant advice. Yeah, it costs him Lotte, but this boy is a lady killer and he’s about to conquer Frankfurt. Even the seduction scene in the rain works well: Goethe sets her up, but it takes Lotte to initiate the action. When they are rolling around in the rain and the brambles, even that looks appealing. That’s the genius of romanticism – it can make the most awkward encounter seem like the dream of a life time.

This is quality cinema done with style and solid acting. Young Mr. Goethe is not here to save the world, but to make it more worth living. Before the Romantics, there were flowery words and long speeches; after the Romantics we have Love for Love’s Sake and no one can talk us out of it. You still may need to marry your daughter to the older, wealthy man she does not love, but now we all understand how bad it makes her feel.

This film plays at the 2011 Florida Film Festival: http://www.floridafilmfestival.com