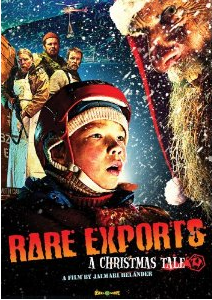 Who knew that Santa’s little helpers were a bunch of older, overweight creeps running around buck-ass naked like drunken bikers at Sturgis? This exceptionally odd retelling of a Christmas story (certainly not THE Christmas story) takes us to the wilds of Lapland, where a mysterious corporation is digging a dreadfully deep mine on top of a mountain. Under it lies a frozen 60-foot high Santa monster with horns bigger than anything Spinal Tap ever staged and a blood thirst Gwar couldn’t satisfy. Along with this iced-up monster are 198 butt-ugly, buck naked, smaller Santa monsters who eat all the reindeer and terrorize little Pietari (Onni Tommila) and his widowed dad Rauno (Jorma Tommila). They rally the rest of the village and cross the border to the mine, which is oddly abandoned. Looks like the little Santa demons ate the miners and then stole every oven, heating pad, and hair drier in town to thaw out the big guy. They also captured all the local children and put them in burlap bags. Finland, Florida, it’s all the same on some level. While the adults are stumped, precocious Pietari goes all 8-year-old Rambo, commandeers a helicopter, rescues the children, captures the 198 mini Clauses, and would have died except his dad set a few hundred sticks of dynamite into big Santa and blew him all the way to next Hanukkah. As kids’ movies go, this is one I wouldn’t show to an actual child under 18 without heavy sedation.

I’m not sure what to make of this. We start out with a decently creepy horror show – mysterious disappearances, Blair Witch-like iconography, and a setting north of the Arctic Circle that is mysteriously well-lit at the winter solstice. Acting is excellent, all the adults (none of whom I could keep straight with their Finnish names) feel real, desperate, and mystified beyond words. Pietari and his buddy Juuso (Ilmari Jarvenpaa) seem like normal kids, except they are carrying Columbine-sized fire power, which, given the population of wolves in the neighborhood, seems like a reasonable idea. The horror set up is excellent – Pietari finds old books (under the floor boards, I assume) that discuss the curse of ur-Santa and drive him to staple shut the last window on his Advent calendar. The particular demon he meets (Ellefsen) is creepy and filthy and more Skanky Gollum than Jolly Old Elf, and when Pietari flies off with his playmates, I’m ready for the splatter to start flying. But after the pickaxe-to-the-head scene (evil Corporate Drilling Guy gets it just at his pinnacle of exposition), the movie shifts to one of those preteen “Kid saves the day when the adults can’t.” Yeah, I suspended my disbelief, but it was way up high where I could barely see it and then we got all happy ending-ish. The blood-thirsty naked elves with their ethylene glycol infused bodily fluids get a holiday makeover, they learn proper mall Santa lessons like “don’t bite the children,” and Pietari’s dad ships them off to places like Tanzania. I smell an international blood-soaked sequel; we all know you can’t train a wolf to replace a Pekingese.