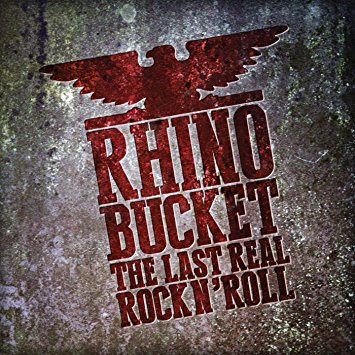 Rhino Bucket was one of those bands that got lost in the shuffle of later ’80s/early ’90s rock bands. They weren’t a hair band, nor were they grunge. They weren’t heavy enough to be considered metal or fast enough to be thrash. They played hard rock n’ roll, and they played it well. The most often used comparison, and in fact the one my friend Jeff used to get me to listen to them, was “Bon Scott-era AC/DC.” You can’t help but hear Scott in lead vocalist Georg Dolivo’s gravelly growls. I was hooked instantly, and bought the first two albums. I rejoiced when they appeared on the Wayne’s World soundtrack, hoping that would equal more mainstream attention for the band. Sadly, that wasn’t the case. Their follow-up release, Pain extended the AC/DC comparisons by bringing their former drummer Simon Wright on board, but still no mainstream success. After that, the band went on a hiatus for several years, from 1996-2001. Since then, Acetate Records has released three original albums and two compilations, while the band has been touring non-stop.

Which brings us to today and The Last Real Rock N’ Roll. That title is a bold statement, but the band does a damn fine job justifying it. Just like their early work, the album is chock full of anthemic rockers, with crunchy riffs and pounding drums. In fact, halfway through the opening track “Hello Citizens”, I stopped playback, removed my earbuds and restarted the album on my home theater receiver with the full-sized speakers blaring. This is a record to be listened to at high volume, on a quality stereo, with the windows open (or rolled down) while you (and preferably a few friends) sing along. That is what rock n’ roll is all about, and Rhino Bucket has captured it. While several of the songs fit the classic three-power-chord rocker formula, a few stand out as different. While not breaking any molds, they flirt with escaping the mold a bit. The aforementioned opening track, while not a political opus like “American Idiot,” can definitely be seen as a rallying cry for the burgeoning resistance movement – “Hello citizens, gather ‘round. It’s a revolution! Join us now!” Closing out the album with church bells ringing, “The Devil You Know” skews heavier, nearing early Black Sabbath territory. However, I think my favorite track is “Last Call” where the band harkens back to even earlier rock with an organ and female back-up singers. If you can resist singing along to this, you should probably check your pulse. If you remember Rhino Bucket from the early ’90s and wondered what happened to them, or if you just miss good old-fashioned hard rock n’ roll, give The Last Real Rock N’ Roll a listen.