There may be different names receiving director’s credits, but make no mistake, the films in Arrow Video’s Cold War Creatures: Four Films from Sam Katzman are all Sam Katzman films. The enigmatic and prolific producer spent five decades producing films that not only came in on time and on budget, but he also proved amazingly adept at anticipating and cashing in on pop culture trends, which made his movie highly profitable. His filmography includes westerns, jungle adventures, superheroes, juvenile delinquency, and even Elvis movies, but his science fiction films are probably his best remembered work. Cold War Creatures collects four of Katzman’s most famous and infamous science fiction films. 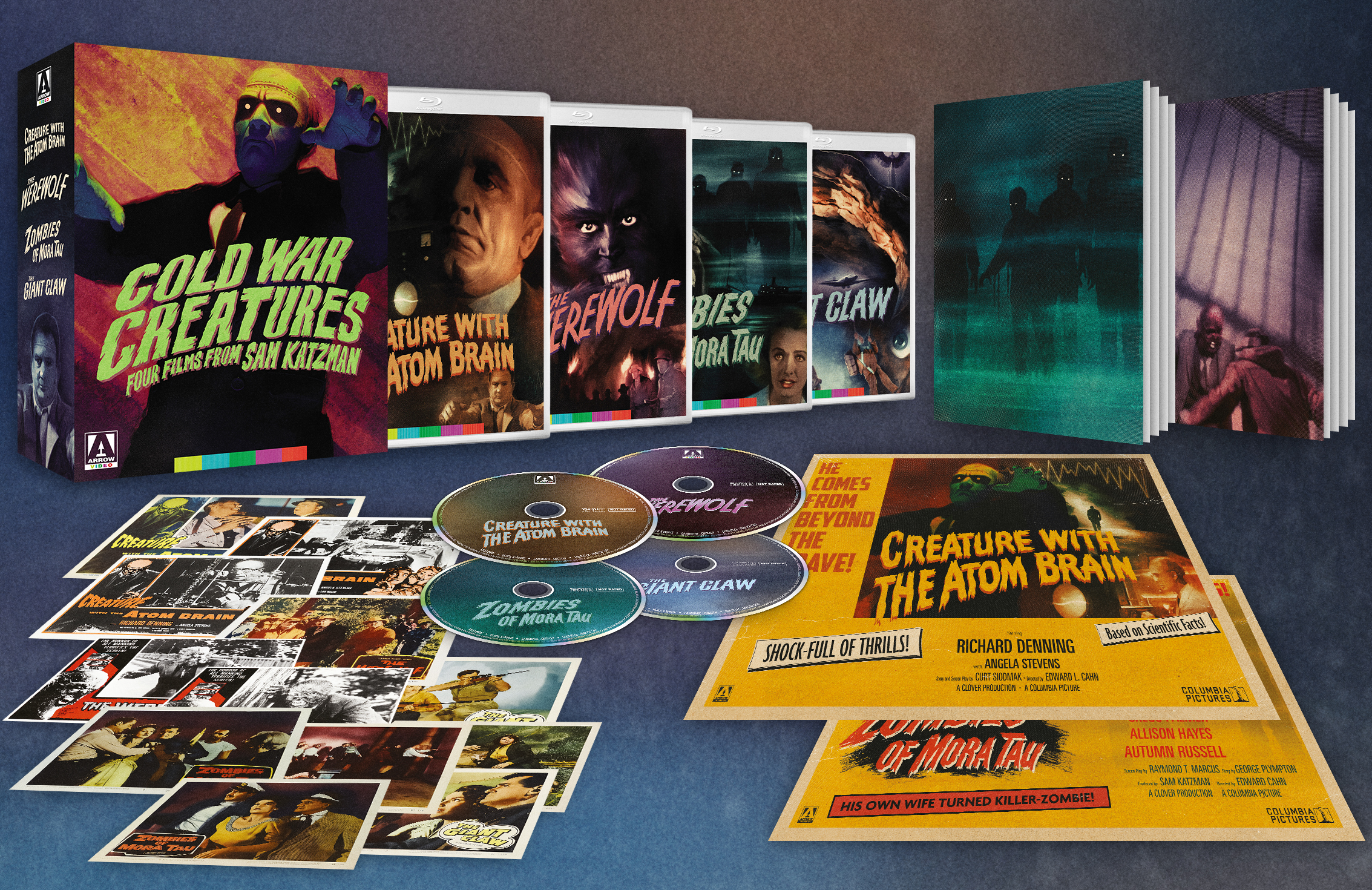 Creature with the Atom Brain is a variation on the horror trope of people, usually gangsters or wrongly accused men, being brought back to life to exact revenge. Titles like The Man They Could Not Hang and The Indestructible Man fit the style nicely. In this one a pair of scientists are using radioactive brain implants to create unkillable zombies to take vengeance on their behalf. Their activity draws the attention of police detective/.scientist played by Richard Denning. Things get personal when they kill Denning’s partner and send his zombie after Denning’s young daughter. The film is highly entertaining,and has some memorable sequences, mostly due to screenwriter Curt Siodmak (I Walked with a Zombie). It is clearly lesser Siodmak, but is still pretty interesting stuff, but the film suffers from too many exposition dumps that make even a sub 90 minute run time feel padded and overlong. The story would have been much better served as an episode of The Outer Limits than a feature film. For all the foot dragging in the middle of the film, the final act makes up for it with a terrific ending even if it does feel a lot like the end of a serial, which is fitting as Katzman produced a number of multi-chapter films including, appropriately, Atom Man vs. Superman (1950).

In the 1950s as the world unwound the aftermath of the second world war horror was a real part of many people’s lives. Supernatural fairy tales suddenly seemed quaint in the face of atomic destruction. Science became the new boogeyman. All over the world science created celluloid monsters and even traditional monsters like vampires and werewolves were not immune. Sam Katzman’s The Werewolf (1956) tells a very familiar tale, but strips away the full moon and Wolfsbane for a hypodermic needle.

The Werewolf is a peculiar mix of film styles and genres, borrowing heavily from the films toward the end of the classic Universal Monsters cycle, film noir, and westerns. In a classic film noir set-up, amnesiac Duncan Marsh stumbles into the tiny town of Mountaincrest harboring a terrible secret he doesn’t even realize, and it is only after a bar fight leaves another man dead. After this fateful encounter, Marsh realizes he is a werewolf, but It isn’t the moon that causes him to change it is anger, pain, or stress (The Incredible Hulk, anyone?). In this telling there are no gypsy curses or alpha werewolves, just a pair of doctors who used Marsh’s car accident as an opportunity to test their new radiation poisoning vaccine serum on a human before realizing the lycanthropy side effect. As in most werewolf stories, Marsh is an innocent in the carnage that is unleashed using his body. Directed by Fred F. Sears, but 100% a Sam Katzman film, feels a lot like the late entries of Universal Monsters films like Son of Dracula or The Mummy’s Ghost that moved the action from some timeless hamlet somewhere in central Europe to modern American, but without really modernizing any of the tropes, just adding radios and electric lights into the equation. This film even ends with the monster being chased by villagers with torches and deer rifles updating the pitchforks, but the change is merely cosmetic.

The odd mix of styles doesn’t always get, but a strong performance by Don Megowan as the no nonsense, but surprisingly thoughtful sheriff helps out considerably. The science is pure hokum but is a novel approach to the well worn werewolf mythos of the previous decade and would presage the far more famous I Was a Teenage Werewolf the next year with a non-supernatural approach. The noir inspired interior photography, especially in the local bar is terrific as is the drooling, fanged, werewolf makeup by Clay Campbell, who also created the great werewolf makeup in 1943’s Return of the Vampire.

Zombies of Mora Tau is often dismissed as a lesser zombie film, and in comparison to White Zombie, I Walked with a Zombie, or Night of the Living Dead it is, but let’s be honest most horror films pale in comparison to those iconic masterpieces. When put in context of the other pre-Romero zombie movies it acquits itself pretty well and would dare say it is actually one of the better zombie films of the era, easily besting fare like King of the Zombies (1941), Voodoo Woman (1957) or Teenage Zombies (1959).

The plot involves a band of treasure hunters who ignore the warnings to not search for a submerged treasure off the coast of Africa. Even finding their pre-dug graves on the island won’t dissuade them from their lust for diamonds. They should have listened to the island’s elderly matriarch, Grandmother Peters as the treasure is indeed protected by a horde of the fallen ship’s undead crew. The film is remarkably atmospheric for a cheap ’50s horror film including the oft imitated and uncanny shot of the zombies slowly emerging from the dark water and shambling onto the shore. Variations on this shot are also seen in Carnival of Souls, The Host Galleon, and even the Doctor Who serial Dalek Invasion of Earth. The whole affair benefits greatly from good performances from its three female leads with bad girl wildcat Allison Hayes,, the blonde ingenue Autumn Russell, and Marjorie Eaton as the elderly matriarch who ultimately just wants her zombified husband to find peace.

The most famous element of The Giant Claw is also its most disappointing and that element is the movie’s monster. Producer Sam Katzman parted company with special effects legend Ray Harryhausen to cut costs and farmed the effects work out to a Mexican company. What he got back was a creature so bizarre it would bring far more howls of laughter than fright. The irony being that The Giant Claw is better known today than many of its contemporaries because of that ridiculous puppet.

For a mid-‘50s giant bird movie, The Giant Claw has a peppy script, engaging leads, and a story that doesn’t let too much plot get in the way of the action, but is forever saddled with that inane, barely articulated marionette. The movie opens with test pilot Mitch MacAfee (Jeff Morrow) twice encountering a UFO in the sky. He and mathematician Sally Caldwell (Mara Corday) investigate and discover the UFO is actually a giant bird-like alien from an antimatter dimension. On screen it looks like a giant cartoon turkey, but never mind about that, this monster means serious business. Standard weaponry does no good, so it becomes a race against time for Mitch, Sally, and the military to come up with something to stop this extraterrestrial menace. Of course they do cook up some pseudoscience in the last act and deliver it from a B-25 bomber over Manhattan. Go big or not at all, I guess. Whether in spite of its flaws or because of them The Giant Claw is an irrepressible shaggy dog of a movie that you can’t help but love.

For a collection of quickie double feature films made to cash in on an uptick in interest in science fiction films, Arrow has assembled a huge number of great extra content. The features include two books, video essays, introductions on all four films by Kim Newman, audio commentaries from Stephen R. Bissette (Creature with the Atom Brain), Lee Gambin (The Werewolf), Kat Ellinger (Zombie of Mora Tau), and Emma Westwood and Cerise Howard (The Giant Claw) and more.

I adore seeing the Super 8mm abridged editions of these films that have started popping up on Blu-ray releases. These films were often unintentionally surreal as they tried to take a feature film down to under 10 minutes and still retain some sense of narrative. For decades these home movies were the closest people had to seeing these films, outside of the chance TV airing.

On the commentaries, Stephen R. Bissette’s track on Creature with the Atom Brain does a nice job putting the film in the context of the time both in regards to films and the socio-political climate in the United States in the mid-1950s. Author Lee Gambin’s commentary on The Werewolf makes the film better. He finds so many story and stylistic elements that aren’t immediately apparent but once you start to notice them the film feels richer than it does on cursory viewing. Kat Ellinger places Zombies of Mora Tau in the folk horror sub-genre as the entire zombie mythos has its roots in the superstitions and religious beliefs of Haiti. The term zombie first entered the world’s lexicon through William Seabrook’s travelogue of Haiti, The Magic Island. She also discusses the film as an inspiration to the Italian zombie films of the 1980s especially Lucio Fulci’s Zombie (1979), which used a number of elements of Mora Tau including underwater zombie fights. Emma Westwood and Cerise Howard lead the rollicking conversation on the delightfully silly The Giant Claw. It is fun and funny, without being mocking.

The video essay Beyond Window Dressing by Alexandra Heller-Nicholas (1,000 Women in Horror) examines the variety of roles for women in these Katzman films that are often more varied and surprisingly progressive for the time. It is a piece that gives you a lot to consider and look for on rewatches of these films and other films of the era.

The films in Cold War Creatures have all seen video release on their own and in the excellent 2007 DVD set from Sony as part of their uneven Icons of Horror Collection. This new set from Arrow features great looking film transfers and a remarkable assortment of extras that makes the upgrade decision an easy one.