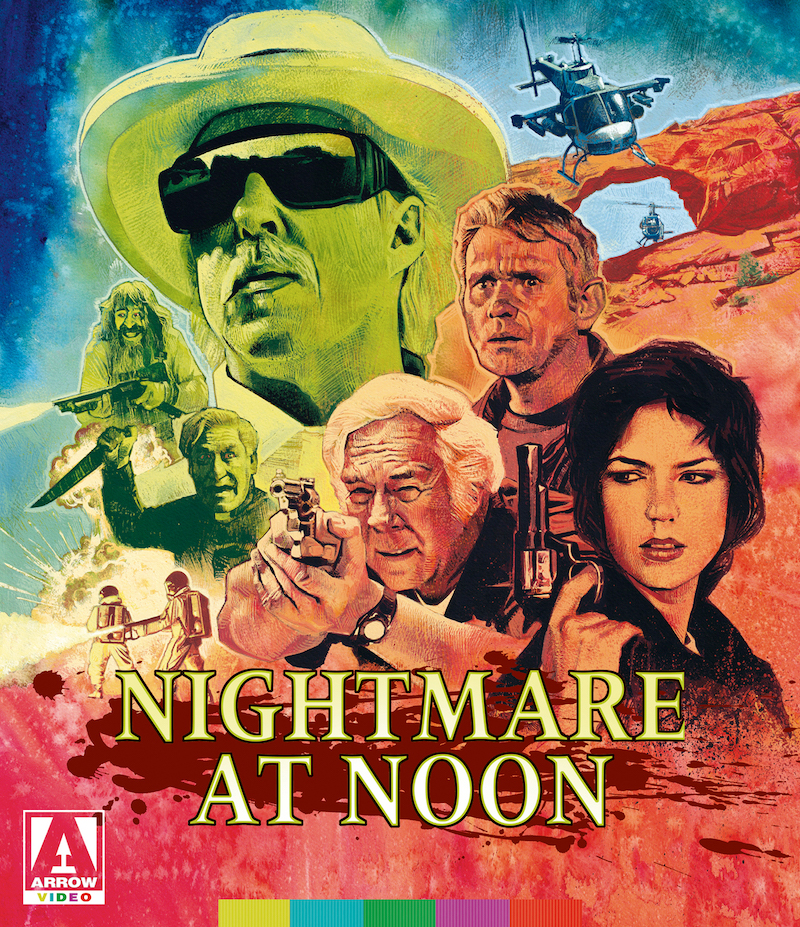 Even in the world of excess that was 1970s and 1980s exploitation filmmaking, there were few filmmakers as unapologetically deranged as Greek director Nico Mastorakis. Before he got into filmmaking, Mastorakis lived a life worthy of one of his own films. He was a music producer and influential radio DJ as well as a newspaper, and later, TV investigative journalist, who broke the story of the secret engagement of Aristotle Onassis and Jackie Kennedy. In the chaos of the fall of the Greek government, Mastorakis moved into the freewheeling world of exploitation filmmaking, starting with Island of Death. He made films into the 21st Century, never matching the bonkers energy of those early films, but his later career did have its highlights. One of the best was the 1988 science fiction action movie Nightmare at Noon, which has gotten a pristine Blu-ray after years of dubious VHS and DVD releases.

Arriving in the sleepy desert town of Canyonland (in actuality Moab, Utah), husband and wife Ken and Cheri Griffiths (Wings Hauser and Kimberly Beck), along with their hitchhiker passenger Reilly (Bo Hopkins), are unaware that the night before, a secret team of operatives led by The Albino (Brion James) had contaminated the town’s water supply. The effect of the contamination is to turn anyone who drinks the water into deranged zombie psychopaths. These zombies are not the slow shamblers of George Romero films — they drive cars, use guns, and want to kill. After an attack which sees Reilly and the local police, led by George Kennedy, team up to take down the local drunk, the Griffiths decide to hit the highway, but soon find the agency that contaminated the water has laid siege to the entire town, and nothing mechanized can get past their electromagnetic force field. Soon Cheri and Sheriff Hanks (Kennedy) are showing signs of contamination, so Ken, Reilly, and Hanks’ daughter Julia (Kimberly Ross) head out to stop the evil machinations of The Albino. As the action leaves town, it is only fitting that our heroes set out on horseback. The last act of the film was shot in Arches National Park, where John Ford and Michael Curtiz put John Wayne through his paces in classic westerns, a fact that was certainly not lost on Nico Mastorakis, as the energy is giddy as the modern day western plays out against the rugged beauty of eastern Utah.

Nico Mastorakis is notoriously eccentric but by no means an incompetent director. He understands perfectly what kind of film he is making and gets the most out of his small budgets with every dollar on the screen. He keeps the action moving with the dialogue- to-action ratio close to a good episode of The A-Team, with more impressive stunts. The stunt work was coordinated by John Stewart and Paul E. Shorts. Stewart coordinated stunts for a slew of cult classics in the ’80s and ’90s (Sorority Babes in the Slime Ball Bowl a Rama, Phantasm III: Lord of the Dead), while Shorts is still working as a stunt driver in Marvel and DC Comics films. George Kennedy is on hand to class things up a bit, and he really gives some gusto to his short role as the local sheriff by actually playing a part and not just phoning it in while sitting behind a desk for a few scenes as so often in the case with older name actors in these kind of films. Bo Hopkins is easily the best thing in the movie, with his southern sardonic charm hitting all the right notes.

Nightmare at Noon is an absolutely silly concoction of science fiction and western genres run through the filter of the 1980s. Many of the ideas may have been appropriated from George Romero’s The Crazies (1973), but with all the societal critique stripped away in favor of more green blood and explosions. In short, this is the perfect teen boys’ Blockbuster rental, to be cheered and jeered with copious amounts of junk food.