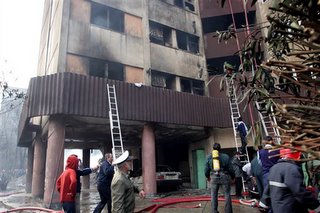 The recent news of a C-130 transport plane that crashed into an apartment building in Tehran, Iran, is a horrible tragedy; one that eerily recalls the events of 9/11/01.

Firefighters managed to put out the fire in the building, which was damaged and charred but still standing. Police cordoned the building and debris field, preventing journalists and a crowd of as many as 10,000 people from getting close to the site. Many in the crowd were screaming, afraid their relatives had been killed. Several hours after the crash, the building still was smoldering.

What catches the eye of the alert reader is the fact that despite a fire inside the structure, it remained standing.

Which brings one to consider the planes that hit the World Trade Center towers, the fires that burned and, according to the official story, melted the steel core of the buildings and caused them to collapse.

Forgive me for being a skeptic regarding anything the U.S. Government swears is the official story, but it seems that two steel skyscrapers built in the most powerful and advanced country in the world would stand more of a fighting chance against aircraft hits than a ten-story apartment building in Iran. The twin towers were built to withstand the strike of a commercial airliner, something I can’t imagine the designers of the apartment building even considering in their plans. Yet, a C-130 crashes into a ten-story building, ignites a fire, and yet the building doesn’t crumple into its own footprint? [The media is now saying that the plane “clipped” the building.]

Which brings me around to the stupendous amount of evidence supporting the idea that carefully rigged explosives brought down the towers; a controlled demolition. This could possibly be written off as hysterical “conspiracy theory” if it wasn’t for the testimony of eyewitnesses, survivors, firefighters, news reporters on video that actually aired in real-time on the morning of 9/11 and in the following days!

If seeing is believing, then check out this page [hat-tip to WhatReallyHappened.com] that includes video proof that an explosion took place at the base of WTC 1.

Listen to the dust-covered survivors telling similar stories of hearing and getting knocked about by explosions:

“I was standing next to 1 World Trade Center and then all of a sudden I heard rumbling and we all started running away from it. The glass like blew out and threw me onto the sidewalk…”

“We’re stuck on the stairs for a while. We finally got down to the lobby, and then when we get to the lobby there was this big explosion.”

“It just went ba-boom, it was like a bomb went off, and it was like holy hell coming down them stairs, and then when we finally got to the bottom we were coming out … and another explosion came…sent everyone flying…”

Listen to the firefighters, who know a thing or two about fires, as they describe the eruptions that threw them to the ground:

Firefighter in the stairwell of WTC 1 during the collapse: “…this huge incredible force of wind and debris actually came up the stairs, knocked my helmet off, knocked me to the ground.”

“Floor by floor it started popping out.”

“It was if they had detonators and they planned to take down a building.”

“We’ve just heard another explosion … the consensus is it’s too unsafe to go in there.”

“We were trying to get some of the people out, but then there was secondary explosions and then subsequent collapses.”

“As we were getting our gear on and making our way to the stairway, there was a heavy duty explosion.”

Listen to the mainstream media reporting about explosions at the base of WTC 1:

“We’ve heard of secondary explosions after the aircraft impacted – whether in fact there wasn’t something else at the base of the towers that in fact were the coup de grace to bring them to the ground.”

“The streets of the financial district covered with debris, in some cases ankle deep. Cars on fire, cars just turned by the force of the explosions.”

Listen to the experts as they analyze what resembles a controlled demolition:

“Never before in history has a steel high rise building collapsed simply because of fire. On 9/11, by coincidence, three such buildings collapsed in ten to fifteen seconds, almost freefall speed. In other words, if you dropped a brick from the top of the World Trade Center it would have taken about that time to hit the ground.”

And what about WTC 7? It wasn’t even hit by the planes, yet it fell straight down into its own footprint. The official story?: fire, as reported by FEMA. However:

Larry Silverstein, the controller of the destroyed WTC complex, stated plainly in a PBS documentary that he and the FDNY decided jointly to demolish the Solomon Bros. building, or WTC 7, late in the afternoon of Tuesday, Sept. 11, 2001.

“I remember getting a call from the, er, fire department commander, telling me that they were not sure they were gonna be able to contain the fire, and I said, ‘We’ve had such terrible loss of life, maybe the smartest thing to do is pull it.’ And they made that decision to pull and we watched the building collapse.” [wmv download]

If this isn’t enough to make you doubt the official story, then perhaps you don’t want to accept what appears to be the horrible truth: that the U.S. government was complicit and possibly directly responsible for the events of 9/11. Nothing’s been proven, as-of-yet, but there are many who are studying the evidence and following the trails, asking questions that others fear to ask. As a result, there is mounting proof that what happened on 9/11 wasn’t the act of Muslim extremists at all. Further proof that Osama bin Laden and Saddam Hussein had nothing to do with the hijacking of four planes and the near-total destruction of the WTC complex.

Who’s to blame, then?

If you’re hungry for the Truth – here’s an extensive list of resources that will aid you in your search.

I, like many others in the growing 9/11 Truth Movement, are starved for the real scoop. Because if the United States government allowed this to happen or had a hand in its execution, then we have been asleep for far too long and now is probably the best time to wipe the sleep from our eyes and rise as a nation against tyranny.

Or, you can remain asleep – and never know what hit you.

It was a party, it was a metal show, it was a lot of fun. Anna-Marie O’Brien catches up with Metal Blade in Vegas.

Pecker also features guest performances from past and present members of such legendary rock bands as Foghat and the Pat Travers Band.

The fact that the band Slaves to Sirens exists is impressive, but that they live, love, and breathe to play metal takes things to another level. Sirens documents the journey. Review by Charles DJ Deppner.

One of the funniest stage comedies ever written delivers the goods on opening night.