It started to thunder and rain. The temperature was somewhere in the nineties and it was pouring! Surely, this couldn’t be happening. I thought we were going to “Have a Nice Day,” but no. Well, the tickets said rain or shine. I guess I’d just have to “Keep the Faith” that the weather would get nicer. Sure enough, the rain moved away and the heat rose, as my mother and I made our way to Citizens Bank Ball Park.

I’d been waiting for this concert all my life. After all, I grew up with Bon Jovi’s music and it’s probably one of the few bands my mother and I will ever agree on. Since this was her Mother’s Day present, I was determined for everything to go smoothly. We got off the subway and made our way to the stadium, home of the Philadelphia Phillies. Bon Jovi was one of the first acts to do a show there. 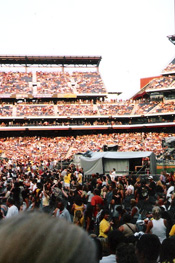 Brittany Sturges
Bon Jovi played to a full stadium, despite the hot weather

We found our seats and a few moments later, Canadian group Nickelback, took the stage. I’ll be honest – I was never crazy about their music. Sure, I knew the lyrics to the songs (after all, they played their songs on the radio repeatedly), but they had never grown on me. Until now. With an hour set, featuring some of their top hits, like “Photograph,” “Someday,” and of course, “This Is How You Remind Me,” I found myself singing along with every song and enjoying it.

As we waited for Bon Jovi’s equipment to be set up, I surveyed the crowd around me. It was pretty much a full house that night, of all ages. To my left, there was a girl of five and I saw some people around the age of fifty-something, maybe sixty. Regardless, everyone was there for the show, despite the bad weather that had threatened to delay the concert. That’s how we Philadelphians are. If we love you, you’ll know. We’ll come out and stand around in 90-degree weather to welcome back one of the greatest rock bands known to man. People were sporting tank tops and shorts, pants and Philly sports-team jerseys (including Jon Bon Jovi’s very own Philadelphia Soul). I even saw one lady in her forties, dressed entirely in black leather. Priceless. 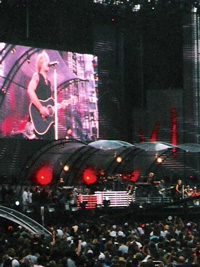 The moment had arrived. Two white vans drove up. The Soul mascot, Soul Man, accompanied by a giant Soul flag and a dozen Soulmates – the dancers – took the stage, as the crowd rose to their feet. Less than a moment later, there they were. Jon, Richie, Tico and David. I admit it. For once in my life, I was speechless. Opening with Elton John’s “Saturday Night’s Alright (For Fighting),” the band began to play, despite the heat. Jon, originally in all black, was all over the stage and even made his way out to the audience several times. Meanwhile, Richie was dressed in pants and some kind of vinyl, plastic-looking vest and a hat with a fuchsia ribbon dangling from it. Next up was “You Give Love a Bad Name.” People were sweating and dancing along, screaming out the lyrics to the songs that had become a part of their lives.

“Runaway” – the first song of Bon Jovi’s to be played on radio, received a huge response from the crowd. They played “I’ll Be There For You,” with Richie on lead vocals, as Jon headed backstage. Afterwards, they played “Raise Your Hands,” “Bad Medicine” and of course, “Livin’ on a Prayer.” All around you could see the dim lights of cell phones, as people called friends and recorded the song.

They took a bow, but Philly was not ready to let go so easily. After several minutes of chanting and clapping, they came back for their encore. The six song set included “Last Man Standing” (a tribute to the late Johnny Cash), “Someday I’ll Be Saturday Night” and “Keep The Faith.” They ended with their anthem – the one and only “Wanted: Dead or Alive.” The crowd rose to their feet and sang along. Afterwards, the band took their final bows and said goodbye. After all, “Who Says You Can’t Go Home?” Well… the audience lingered for several moments before deciding that it really was the end. Content with a two-and-a-half hour performance from one of their beloved bands (who are still excellent… “Just Older”), they trudged up the stadium steps. 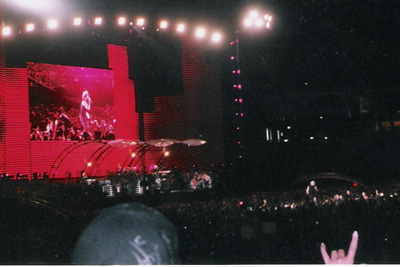 Brittany Sturges
Jon venturing into the crowd, cowboy hat and all

I found myself waiting in a long line, handing over $35 for a t-shirt. After all, I wanted memorabilia from what is going on record as the best show I have seen in my life. That’s right folks, you read that. If you can see them live, GO! You won’t regret it.