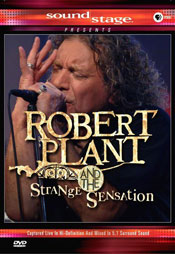 Having been fortunate enough to have seen Led Zeppelin in concert as well as several Robert Plant solo excursions, I was eager to watch his first ever live DVD brought to us by the wonderfully intimate PBS series, Soundstage. Robert’s diminished vocal range may be reflective of his unwanted AARP card-carrying status but it’s his boyish charm and love of performing that keeps his fans cheering and the lemon squeezers squeezing.

Using the same Middle Eastern “soundscape” formula that worked so well for him and Jimmy Page on their Unledded release, No Quarter, Robert opens up in fact with “No Quarter” from Led Zeppelin’s majestic Houses of The Holy album. Even though the Unledded release came out in 1994, the familiarity of it all makes this opener come off a bit redundant. “No Quarter” was one of Zep’s greatest “head” songs and replacing the song’s original spacey keyboard work and howling sound effects once again with Middle Eastern flavorings just seems repetitive. The DVD does kick into gear with the next few songs. “Shine It All Around” has a swirling stadium feel to it and the country honk verses of “Black Dog” combined with an almost exact Zeppelin replication by the band of the chorus brings this Zep classic back in a big way. “Freedom Fries” is a terrific number that once again showcases this very talented group of musicians, even though the song’s title should have been left on the counter at McDonalds. This remarkable quintet featuring Clive Deamer (drums), John Baggott (keyboards), Billy Fuller (bass), Skin Tyson (guitars) and Justin Adams playing gimbri, darbouka and guitar, seem to truly understand and co-inhabit Robert’s dreamy vision of this newer and more communal Zen Zeppelin. “Four Sticks” is dedicated to the late John Bonham and does the late Bonzo proud with its thundering recreation of his legendary percussion. Several other songs from Plant’s 2005 release, Mighty Rearranger appear including “Tin Pan Valley” and “The Enchanter” but it’s when Robert starts swingin’ from his “Gallows Pole” that things start to get interesting. A killer version of “Whole Lotta Love” closes out this hourlong set delighting his audience with a faithful yet creative approach to this certified classic.

Robert Plant seems to have found a great balance in a life filled with extremes. His celebrity glass can no longer be looked at as half-full or half-empty. With a new band and an inspired vision for the future it can only be seen as a crystal clear reflection of the man himself. Where his fans can look in and joyfully all will be revealed…