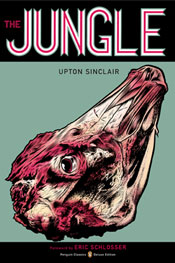 The American Dream had not been kind to Jurgis Rudkus. Young, strong and idealistic, he brings his family from rural Lithuania to Chicago a century ago. They told him wages were much higher in America, which was true, but forgot to mention the cost of living was even higher. What seemed like an opportunity for a man to feed his family spiraled into enslavement by uncaring employers, harassment by con men, and a life tied to a city built on a garbage heap. This classic tale of honest but exploited workers slaving for evil corporations underpins much of the American Labor Movement’s moral justification to organize, strike and reform. Did it work? Sort of. Things are better for the typical wage slave today, but few opportunities exist for those with nothing beyond a strong back and a weak mind. Low-end work always flows to the cheapest location, which may or may not have the conditions Sinclair so lovingly describes. The food we eat may be cleaner, but there’s always shit and sewage and today it has nowhere to go as the world grows north of six billion. Good God – am I becoming an existentialist environmentalist? Perhaps this book still has power…

You may or may not have read this work in high school or college English, but there’s a reason it’s on the required list. It’s a labor classic, along with Grapes of Wrath and Cannery Row. Today the stories told seem almost surreal but they were real enough a hundred years ago. This new publication by Penguin attempts to stick as close to Sinclair’s original vision, originally told as a serial in the socialist The Appeal to Reason newspaper. Once you are past the disturbing skinned cow head on the cover, the story is reasonably readable as a socialist sales brochure, and the excellent intro material introduces the modern reader to the historical and social context of Sinclair and the Socialist movement. Today, socialism seems an oddly quaint philosophy, but many of its tenants have become accepted standards for the relation between the worker and the workee. If you missed this in 11th grade, it’s a not a bad read, and a wonderful gift for your slacker cousin this holiday season.