The blue water of the Gulf of Mexico glistened beneath the blistering Florida sun and palm trees swayed above the sun-soaked heads of the thousands gathered at St. Petersburg’s Vinoy Park for this summer’s Warped Tour. Those in attendance for what is sure to go down in the books as the worst Warped Tour bill in its 14-year history at least found solace in the natural beauty of the event’s surroundings. 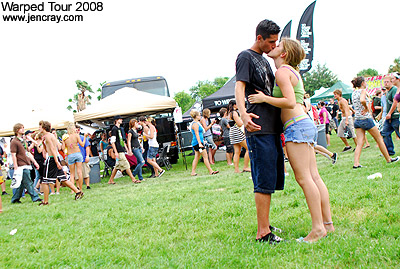 The Warped Tour has always been heavy on the teen-friendly, mainstream acts, but this year’s lineup is so bogged down with Hot Topic poster boys that there are no open spots left for the old school punk acts whose music was originally the foundation of the tour. 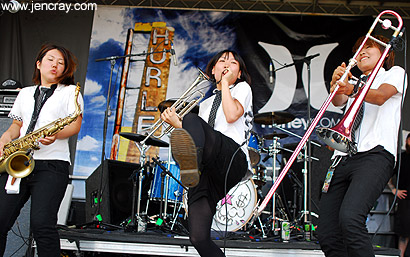 This would still be completely acceptable if the young bucks on the big stages had anything to offer the audience beyond bad haircuts, ass cracks, and forgettable songs. With the exception of Against Me, the bands scheduled for the two main stages didn’t seem too promising, and so I did my best to steer clear of them. 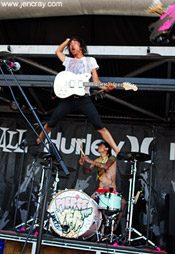 I spent my day running between the many small stages beginning at high noon with the refreshing and buoyant grooves of Oreskaband. I had previously found their album fun but disposable, but maybe it’s just that this sextet only makes sense when you see their smiling faces dancing around in front of you. The Japanese beauties dress like school girls and are hell-bent on reinvigorating traditional ska. It’s even in their name – Oreskaband translates as “we are ska band.” The girls seemed to be having more fun than any other band on the tour, and when they included a cover of Toots & the Maytals “Monkey Man” in their set, I, too, was one happy Warped Tour audience member.

In the past I have expressed my frustration with the tired genre of screamo, a genre that though present at the festival was not responsible for the worst music I heard for the day. This year listeners have to grit their teeth through the latest trend: hip hop-infused disco that’s dressed up in emo clothing. The worst of these offenders is a stoned duo that goes by the name Shwayze, and whose best lyrics go something like, “If you got the weed/ I got the pipe/ We can get high together all night.” Dress that up in fluorescent colors and smoke it. 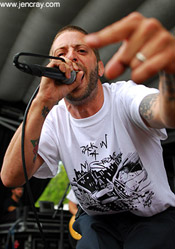 If you insist on finding your hip hop fix, The Lordz (formerly Lordz of Brooklyn) is a safer bet. Remember Travis Barker and Tim Armstrong’s rap/punk side project, The Transplants? The Lordz is just like that, only without members of Rancid and Blink 182. It wasn’t particularly to my liking, however they did put on one hell of an energetic show. Plus, one of the two vocalists was keen on doing the robot. How can you not like a band that seeks to bring back the robot?!

In need of at least the slightest dose of punk, I managed to find a bit of a silver lining in the form of The Saint Alvia Cartel. For this reggae-inspired punk band from California there were maybe a dozen kids in the “crowd,” none of whom seemed to be doing anything more than killing time. The band take their cue from The Clash delivering a sound seeped in the islands, but painted with the grime of the street. 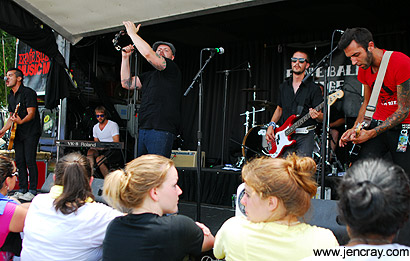 Also paying homage to bands of punk rock’s past was Longway. Another tiny band with a tiny crowd that most people missed out on, but a diamond in the rough for fans of street punk. One of the precious few who gathered got to strum a few guitar licks when the band’s guitarist (whose eye patch comically proclaimed “out of order”) jumped onto the barricade and handed over his instrument. It’s bands like this that I seek out at each summer’s Warped Tour, and – sadly – there seem to be less of them with every passing year. 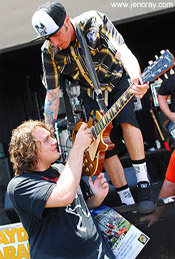 The crowd that stood before Broadway Calls was only slightly less tragic, and those three kids from Portland are delivering some of the best pop punk on the entire tour! Picking up the reins from a pre-politically aware Green Day, these guys have got infectious three-minute nuggets that will stick in your brain upon the first listen! Speaking of Green Day, these boys recently got signed to Billie Joe Armstrong’s Adeline Records – so there’s your street cred!

That’s not what the Warped Tour fans circa 2008 are looking for. These kids want big hair, tight jeans, and mindless pop songs, and so the crowd that gathered for Forever the Sickest Kids was large enough to be main stage-worthy. Several hundred fans tightened up against the itty bitty Ernie Ball Stage to catch this “next big thing.” This brightly-colored, power pop band of boys from Texas is well on its way to being next year’s stars. That’s not a compliment, but a prediction. 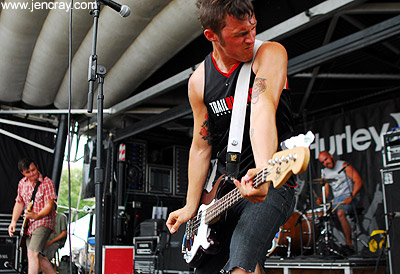 Everything about this tour has become homogenized. At one point in my day, I walked past a stage and heard a sincere cover of Kelly Clarkson’s “Since U Been Gone” (by the band A Day to Remember). The audience was singing along, and even crowd surfing. 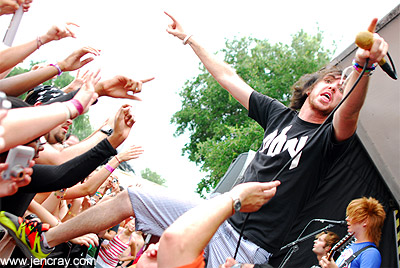 Seriously, what the hell happened to the Van’s Warped Tour?!