Orlando fans who popped into The Social for the RX Bandits’ show on July 25 were greeted with a very unique opening set by an almost unrecognizable Portugal. The Man. John Baldwin Gourley was front and center on guitar and vocals, but bassist Zach Carothers and drummer Jason Sechrist were M.I.A.

“Zach had to fly back to Alaska to the be best man at his best friend’s wedding,” Gourley explained to the crowd. 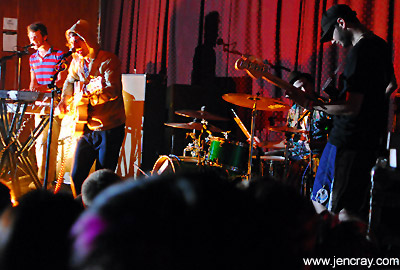 Joining him onstage, instead, were a brand new drummer who filled in for Jason on this tour, and multiple members from the two other bands on the bill (Facing New York and RX Bandits). The result was an unpolished jam-like take on the band’s normally air-tight songs.

After the unusual set, Gourley stepped outside with me to discuss songwriting, The Beatles, and global warming.

So, Zach’s in Alaska for a wedding? Is this the first show that he missed?

Last night as well. Last night was so scary, just being that it was the first night and having to jump into it (laughs). None of those guys know the music at all, and the only one of them who has been in the band for longer than six months is Ryan, the keyboard player. They were all from the other bands, and then we have a fill-in drummer on this tour because Jason had some family stuff happen back home. He had to stay back and keep things cool.

How has it been with all of these new people on stage with you?

It’s been all right. It’s been really weird. We’ve gotten so used to playing with Jason, we’ve been playing with him for two and a half years and to bring in somebody else is just kind of – it’s just so different. Every drummer has a different way of playing and getting used to the way that Garrett plays, he’s a little bit softer than Jason. 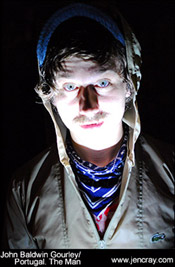 Are you the main songwriter or do you collaborate with the rest of the band?

It takes the whole group… but the way it all starts is that I’ll sit down with an acoustic guitar and just track songs in the studio. Each day I’d track a new song and then build it up and add the arrangements as it was coming out. Everybody does their part.

But it starts with you?

Yeah, it kind of builds on top of that.

What about the lyrics? They seem very stream-of-consciousness. Do you have a meaning for the songs, or do you use the words as sounds and textures?

It depends. The songs definitely have a meaning and come from everything that happens in our lives, like any band. Even if it’s a metal band singing about death, that’s still a part of life, ya know? But, for the most part I don’t write lyrics before I go into the studio which, from what I understand, is very frustrating for everyone that has produced us (laughs). ‘Cause I’ll be singing, and then I’ll stop and I’ll be writing… they can hear me writing. I need to figure out some way to get away with writing in the booth without them hearing me.

At this point in our chat, the backstage door opens up and a drunken underage girl is kicked out of the venue. She walks right up to John and me and stands there awkwardly for a minute or two, telling us about how she got kicked out but that’s so “punk rock!”.

Does that kind of thing happen to you often?

(Laughs good-naturedly). I don’t hang with those people!

…you actually write the lyrics while you’re in the studio recording the album?

Yeah, pretty much everything is “go in, do it, and see what comes out.” The most fun that I have, lyrically, is to just look at words, and certain combinations of words… reusing the same word multiple times in a sentence. It creates really fun, weird images. That’s my favorite part about music. I listen to Abbey Road and I think back to what I thought of it as a younger kid. I would listen to “Octopus’ Garden,” or “Yellow Submarine” and it was just “Octopus’ Garden,” ya know? It was just crazy.

So you’re a big Beatles fan?

Yeah (laughs). Pretty much, it’s just The Beatles. That’s it.

There’s a big difference between the first album and the second. How has the (upcoming) third one evolved?

When we went to the studio for the second, it took an extreme “throw everything out the window, and start over” [approach]. We named that record Church Mouth before we wrote it or went into the studio or anything. We went out of our way to make it almost a bluesy-influenced record. That’s just how it came out. I think that we realized, along the whole run of this band, that it’s so much more fun to make different records every time. This record’s no different. We went back into the studio and threw everything out the window again. It still has The Beatles references here and there… it’s just a different take on that. It always tends to sound like us, which I think is really fun. We take the points of our band that are us, which are the mixture of just everything that we all listen to and mash them all together into this mess of music (laughs). 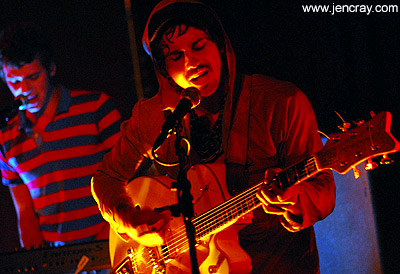 Every time I’ve seen you play you’re on a bill with a very different group of bands. Do you like playing for audiences that might be a challenge because they’re into a sound that’s completely different than Portugal. The Man?

Yeah! We’ve had the best luck… We’ve gotten really lucky to play with bands like Grizzly Bear, 31 Knots, and Man Man. Then RX Bandits fall into the same set as that, as well as Circa Survive. Then we’ve toured with Poison the Well, and The Fall of Troy. Not many bands can straddle that line. Just hanging out with Man Man and bands like that, they always have questions like “how do you play in front of all those kids?” A lot of those bands that are just really respected, really great bands, they just don’t travel in that same circle… We’re lucky enough to straddle that line so we might as well play for everybody we can.

If you could tour with any one band, who would it be? I know at times you must end up on tours with bands that you may love as people but whose music you just don’t enjoy.

Yeah, yeah. That, obviously, happens more often than not for every band – with the exception of Grizzly Bear who gets to tour with Radiohead and Feist, and everything that I want to hear! I think The Roots would be amazing to tour with.

Yeah, it’d be so cool though. They’re such a jam band, such grooves.

That’s really what you were doing tonight, just jamming.

(Laughs) Yeah, we had no choice!

A lot of those guys didn’t even know the songs, right?

Yeah, they really didn’t. They were just hangin’ out (laughs). 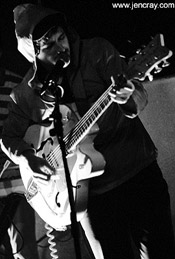 Was that scary for you?

It was really scary last night, and then tonight it was… scarier. I had a lot more fun tonight, in just being more comfortable with them. I normally have Zach here to hold down the bass and anyone can do anything on top of what he’s doing… It’s so obvious whenever he leaves, and someone else comes in, because he’s just so good.

Being that we’re in Florida, it’s really fascinating to meet someone who’s from somewhere as polar opposite as Alaska. Correct me if I’m wrong, but is Alaska as completely far removed from everything as people would imagine it to be? Do you miss living there?

It is, to an extent. There are people there though. (Laughs) We have food, and TV…

There’s a small village and, yes, there are vampires (laughs).

When you went from growing up there to touring the States did you notice a big difference in the pace of life?

Yeah, I think so. You don’t notice a difference when you’re living there. Shit, I lived there forever and I didn’t think it was any different until I left the state. We lived in towns and cities – well, what you considered a city until you left and went to a real city – and I thought it was somewhat normal. After I left, I went back to my parent’s house that is just woods, miles and miles of trees behind the house and then nothing. You run into mountains at that point. It’s pretty crazy, I’m pretty lucky to have grown up there.

It’s funny, after being gone so long, when you go back it’s like a different country. It’s funny that they even speak English there (laughs).

Is there a big difference in the climate? Do you notice the effects of global warming on the state from when you were a kid ‘til now?

Oh, shit. When I was little, I mean I was a pretty small kid, but I remember there being a lot of snow. That could just be being a little kid thinking “That’s a lot of snow! Six inches of snow – that’s half my leg!” But I have noticed that after El Niño happened the winters definitely got shorter. It was wild, it went from October to May being winter, to October’s cold, December’s warm, January’s fucking freezing, February’s a swampy mess, and March is cold again. It’s just really weird. Winter hits multiple times, and then goes away and comes back. This summer was the most strange, by far. The sun’s out all day long, and it is Alaska so you don’t expect it to be warm, but it’s normally between 65 and 100 degrees. I’ve worked in 105 weather in Fairbanks. You know, it’s the Sun. (Laughs) It’s out all day, of course it’s gonna be hot! This summer, though, it’s been below 60 the whole summer – which is just crazy. 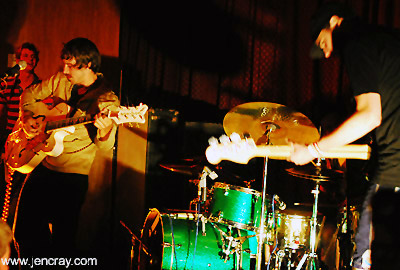 As another drunken patron of the show is booted out the back door and into the circle of our conversation, we decide to wrap things up.

When does the new album come out?

Any plans for a headlining tour?

Yeah, we’ll be going out in the fall with, probably, Earl Greyhound and The Big Sleep.

Those are both great bands. I’m sure I’ll see you then!