Confessions of A Tabloid Writer!

Confessions of A Tabloid Writer!: “News” I wrote for the Tabloids! 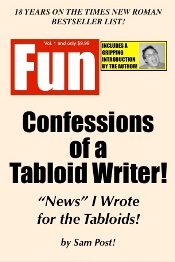 So there you are, standing in the checkout line reading those lurid headlines – “Fax Lovers Commit Double Suicide,” “Terrorists Invade Condom Factory,” “Bank Robbers Have Sex During Holdup.” Where do they get this stuff from, anyway? They get it from freelancers like Sam Post: schoolteacher, frustrated novelist, and man with a knack for writing absurdist news that’s funnier than reality. In this hysterical collection of articles written for a major unnamed publication, Sam reveals how he secretly bought a tabloid, read it, and thought “I can do that!” A career was born. His breezy style and ability to riff off of life’s daily absurdities gave him a steady writing gig with more exposure than many aspiring authors receive.

As print media declines, the best of these semi-serious papers has retreated to online publication, leaving the checkout lines completely saturated with celebrity alcoholism and unflattering pictures of stars in saggy bathing suits. Occasionally, they actual scoop the legitimate media, such as the recent case of John McCain’s affair, but that just shows how flaccid the mainstream press has become. The tabloid world has changed, and not for the better. Mr. Post no longer has the joy of seeing his creations standing proudly next to Archie and Jughead Digest and Horoscopes for your Cat, but he’s philosophical. While a Finnish couple may not have bowled for custody of a pet, and perhaps there never was a cat able to dial 911 in an emergency, Post’s world can provide an alternate universe of excitement and mystery, and the confidence that no matter how badly we mess up, someone else has it worse.