It’s June 1st, hurricane season is open, and it’s getting muggy. The ticket lady at the Plaza’s gate won’t let you in until she tears your stub, but once inside you breathe the same cool air as the other cool people exhale, made even cooler by opening act Blu-Tet. The audience drifts into the auditorium, some with drinks, some with cell phones primed to capture the utter coolness of the evening. A few young men stroll out on stage and begin playing. After a few bars, the light guy wakes up and pours them some gentle puddles of an Electric Yellow gel. Some bands need no introduction, but these guys weren’t even listed on the flyers or the marquee. 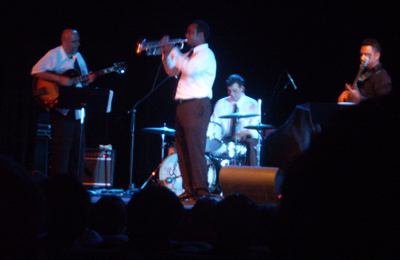 I determined that the trumpet and some vocals came from Jarritt Sheel, Marco played bass, John was on guitar, and impossibly lanky Derek played drums from a low stool, looking like an anxious parent at a third-grade teacher’s conference. Everyone got a solo or two, with the audience applauding politely as if they had just sunk a long putt. Jarritt was excited about seeing the headliner, and repeatedly checked his pocket watch app to make sure they didn’t run long. Before they left they squeezed in some standards like “Bye, Bye Blackbird,” and “My Funny Valentine.” Smooth and practiced, these guys are probably even cooler when they don’t act nervous about the band that’s following them.

While the audience took a well-deserved booze break, the drum techs came and changed instruments, and we were about to head back to Fats Waller’s prohibition-era New Orleans. Preservation Hall Jazz Band has been around since the ’60s. The staff rotates, but the brassy sound of Dixieland persists. As with all good jazz, there is an introduction of the musicians, each entering and adding a new element to the show. Everyone gets a solo, except the drummer (Joseph Lastie, Jr.) and the slap bass and tuba player, artistic director Ben Jaffe. We open with a group version of “Down to New Orleans,” then clarinet player Charles Gabriel gives us “Sweet Substitute,” a classic love story told against the backdrop of Nutrasweet and aspartame, and a smoky “Sugar Blues” follows after “Old Man Mose is Dead.” Only one musician admits to a jazz name, that’s trombonist Frederick “Voice” Lonzo. He stole the show with his Filene’s Basement low-ripping riffs. When not playing, he sat and looked bored, hoping the roadie would come out for a quick game of Gin Rummy. We discover the source of the name when he sings “Has Anyone Seen My Gal?” like a demented Fred Sanford. I’m not sure the words were all correct, but when he throws in more trombone, he’s golden. 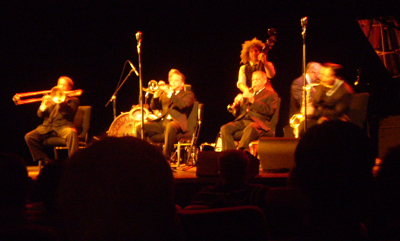 As the show begins to wrap up, we get a double-clutched “St. James Infirmary Blues” – first trumpeter Mark Baud drags us through the misery of losing a hooker girlfriend to alcohol, then slicked-back saxophonist Clint Mason responds with the positive snapshot: “She’s dead, God bless her, and I’m on to someone else.” Well, after that moral ambiguity it’s time for a big blowout, and while I expected the lovably trite “When the Saints Come Marching in,” the actual pull-out-the-umbrellas-and-follow-the-band-into-the-lobby number was “Last Chance to Dance.” Lead by the trumpet, chased by the tuba, the band invited the audience out into the aisle, once around the block, and on to stage. Jazz ain’t dead, baby; they just want you to think so. We’ll never drink bathtub gin in the 9th Ward, but Preservation Hall captures the spirit, if not the sweat, of the founding fathers of this uniquely American music.