I never know what to expect from a Ted Leo & The Pharmacists show. The first time I saw them they were opening for Death Cab For Cutie, attempting to fill a college arena with a largely quiet and folky set. A couple years later, they were sandwiched between a riotous Future of the Left and the arena-punk anthemic Against Me, and their set – while lively – still failed to grip. This time, headlining their own tightly packed gig in a venue that has housed them many, many times over the years, Ted Leo & The Pharmacists finally cracked the shell of my brain’s pleasure center. 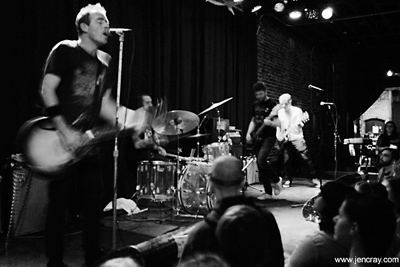 Finally! I thought to myself, This is the Ted Leo I’ve been hearing people rave about for so long! I GET IT! Of course, having a blistering trio that sounds like Sleater Kinney covering The Stooges to kick things off didn’t hurt my state of being one bit! 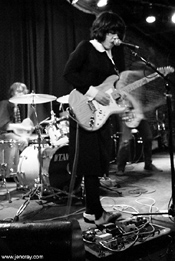 Screaming Females, a New Jersey garage explosion whose placement on the bill was an even bigger draw for me than the headliners, bears a sole double X chromosome carrier in the form of front woman Marissa Paternoster. Despite the moniker, she does a lot more than just scream. Her vocals move from melodically bouncy, as on the impeccably fun “Sour Grapes,” to mind-numbing horror movie shriek (“Buried in the Nude”), but the true mastery of the pocket-sized singer comes through in her guitar work. 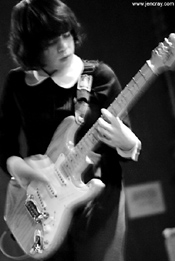 Cradling a guitar half the size of her body, Marissa doesn’t just play some punk rock power chords, she shreds. With ease and modesty not usually seen in lead guitarists, the screaming female highlights her band’s songs with small solos so fiery that soon even the barflies were migrating toward the stage to show appreciation. The band doesn’t really speak, or even take breaths between songs – except to take long pulls from their Coronas – yet theirs was a set even the headliners had to comment on.

After Leo revealed that his tendency is to hide in a dark corner of the stage, guitarist James Canty chimed in with a revelation of his own:

“…and then Marissa from Screaming Females comes out and plays all your guitar parts.” 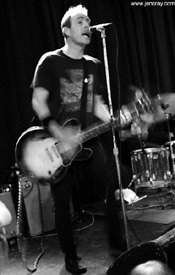 To which Leo replied, “For those of you who’ll be at our show in St. Augustine tomorrow, James’ microphone will not be turned on.” A forced burst of feedback followed, cutting off Canty’s retort.

The playful mood onstage made for a fun and invigorating setlist that plowed along at a breakneck speed. “Mourning in America,” off of The Brutalist Brick, was played with such force and aggression that it felt more like Rise Against than the Ted Leo & The Pharmacists I had previously been audience to.

Leo was a blur for most of the night, flinging himself back and forth between the dark shadows and the naked light of the microphone, and by the first song’s end (“The Mighty Sparrow”) he was already spraying the fans nearby with sweat from his brow. Sweat must be that secret ingredient that gives this band that extra special something – the key to packing the house every single time they come through town – because they were wetting the stage with it. 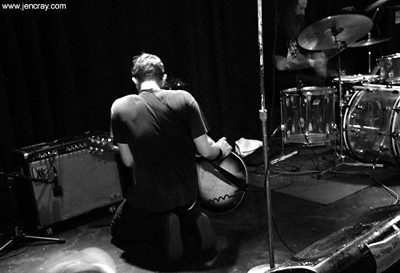 The appeal of Ted Leo – it’s not just the songs, which sound decent enough on record, but don’t fully come alive until performed live. It’s not his voice, which comes off a bit like an emo-ized Elvis Costello at times. It’s what happens when it all comes together in the community of a crowded club. The songs, the voice, the sheer energy of the band when they’re having a good night – that’s what brings out the bodies and I was glad I was there to share in it.