The Fallen: Life In and Out of Britain’s Most Insane Group

The Fallen: Life In and Out of Britain’s Most Insane Group 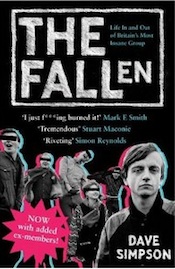 Michelangelo once said of his sculpting that he looked at a block of marble and saw a fully realized statue, it was just a matter of chipping away the unnecessary pieces, freeing it from the block. What Dave Simpson does in The Fallen is to analyze, tell the story of the piece of art (in this case The Fall, and its leader Mark E. Smith) by looking at all of the discarded pieces and rubble chipped away and left on the ground. Which is not to compare Mark E. Smith to the “David” or anything, but still. Taken another way, The Fallen resembles Akira Kurosawa’s Rashomon, trying to get at the story of The Fall by letting everyone tell their conflicting versions of the band’s true story. And by everyone, I mean EVERYONE. Simpson undertakes the herculean task of tracking down and interviewing all 40-something ex-members of The Fall, earning the eternal enmity of the tempestuous Smith and almost ruining his own life in the process.

What starts out as “just another rock book” becomes a fascinating portrait of obsession and an Apocalypse Now style quest with Mark E. Smith as the mythical Col. Kurtz deep in the jungle. (Hmmmmm, Brando’s Kurtz and Smith do share a very similar style of oblique communication and cultish discipline.) Well that’s not quite true, Simpson snags the object of his obsession, Mark E. Smith, The Fall frontman, leader, and sole original member, in the very first chapter of the book, with a lengthy and candid interview. The end? Hardly, that’s only the beginning of Simpson’s journey. From there, his life becomes a nightmare scenario of eyestrain from scouring liner notes and websites for long-forgotten rhythm guitarists and keyboard players, car trips crossing the country to meet up with this drummer or that clarinetist, cold calls to everyone named Brown in a certain city, domestic strife when the whole thing gets too consuming, and shadowy threats and dark curses from Smith and his retinue. Simpson’s girlfriend leaves him midway through the book, worn out by his obsession, for a lorry (truck) driver. In a darkly comic moment, Simpson takes comfort in repeated listens to a Fall song called “Container Drivers” about how, you guessed it… truck drivers suck. (Fucking genius! Take that Bob Dylan!)

Smith’s disapproval and possible black magic curses notwithstanding, this is a fabulously written and ceaselessly engaging book. Ex-band members provide a never-ending stream of prime Mark E. Smith anecdotes, of a life spent aiding and abetting total aesthetic chaos/tension in pursuit of new sounds and new ways of expression. So maybe during a concert Smith’ll drink himself into oblivion, unplug an amp (or five), mess up keyboard settings, change up the setlist, or recruit a new drummer fifteen minutes before showtime, what of it? As Smith himself barks, it’s just “creative management, cock!” Smith is the only constant member remaining in 30-plus years of intense creative drive (they were contemporaries of Joy Division): one or more albums a year, restless, constantly changing music, grueling touring schedules that have the logistical sense of darts thrown at a map of the world, and a bandleader who apparently hasn’t eaten solid food in decades (subsisting on a liquid diet, as they say) dedicated to spontaneity, conflict, and uncertainty in day-to-day business affairs. One of the few stories of a bandmember getting even with Smith is when two new inductees (electro duo D.O.S.E.) crafted a demo’s worth of electronic music in private, secretly dubbing Smith vocals atop; they then forged their leader’s signature to a fake press release enthusing, “Hey dudes, this is The Fall’s new musical direction. I think you’ll agree, IT ROCKS!” duly sending it out to tastemakers at record companies and radio. At first enraged, a sheepish Smith was then obliged to release the music, when eager contracts were proffered.

As Simpson talks to musician after musician, most back in day job hell, booted unceremoniously by Smith, a curious pattern emerges. Hard feelings are few and far between, indeed most look back on it as the most creatively productive period of their lives, and a good many of them see him as sort of a surrogate father figure in their lives. Revelations like these even throw Simpson off a little bit, until he realizes that The Fall, and Mark E. Smith, filled a void in the lives of these musicians, and changed the direction of his life as well. And by the end, when he finds ultra-mysterious drummer Karl Burns (the Keith Moon of the Who, or Syd Barrett), well, that’s just icing on the fucking cake. Meanwhile, The Fall have a new album out…