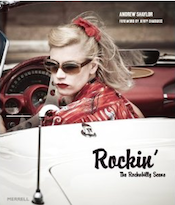 The years have not been kind to Rockabilly’s reputation. The thuggish, reactionary Teddy Boy image of Seventies Britain has stubbornly stuck. The Sex Pistols were the future, the goofballs with the oversized jackets and quiffs were the caveman past, end of story. For my part, stumbling into a Reverend Horton Heat show in 1995 was like seeing an army of Chads dressed as Fonzie beat on one another. No fun. But that ain’t quite fair. In its time, rockabilly music was fucking wild and raw. As evidenced by the superlative Rockin’ Bones compilation, rockabilly was the first teenage delinquent, generation gap and proud of it music. “You thought rock and roll music was bad, old timer? It’s worse,” each subsequent 45 seemed to say, before combing its metaphorical hair back with a switchblade comb. Rockabilly spawned everyone from Elvis Presley and Johnny Cash to true maniacs like Hasil Adkins and Ronnie Hawkins. But the aesthetic, sonic, and sartorial parameters of rockabilly remain narrow and unchanged, frozen in amber. Photos of rockabillies in the Fifties, Seventies, and the new millennium look exactly the same. The fetish for stand-up bass, custom roadsters, and tattoos are still the touchstones of rockabilly. You’ll be more likely to hear old records instead of newer bands at any of the rockabilly festivals and weekenders captured in this coffeetable photography book that attempts to capture the car exhaust and hair grease vibe of rockabilly. This is a music whose 1950s heyday is painstakingly reenacted by its modern day adherents almost sixty years later.

Andrew Shaylor, the man who brought you the photographic compendium Hell’s Angels, immersed himself in the subculture until he emerged with an exhaustive photographic record. That he focused most of his efforts on the UK rockabilly scene, whole oceans apart from the birthplace (Southern US) of the movement’s heroes – Carl Perkins, Charlie Feathers, Hank Williams – is an interesting gambit. And it makes for a more surreal set of photographs. On the one hand it’s good fun to play “Spot the Englishman/woman” in the photos (no peeking at captions allowed); on the other hand, the Brits approach rockabilly with the total commitment and eye for detail of Civil War reenactors. The clothing, when possible, must be period, every stitch must be in place, if yer car means shit it had better be made out of original parts, arguments rage over whether the burlesque dancers performing should even be involved, since there was no burlesque in the original hayride scene. Of course, then everyone just gets blinding drunk and dances like mad, so there you go.

The images that populate Rockin’ veer wildly from this lurid, luscious crushed-velvet feel to stark black and whites where you count the chipped teeth and homemade tattoos. There’s a pleasingly multigenerational (and in the handful of US based shots, multi-ethnic) feel to these photos that you wouldn’t get from a photobook that was called, say, Hipster. It’s oddly cool to see these old salts still slicking their hair back or grandmas with their shirts tied up right above the navel, and no one’s sayin’ a damn thing. And while I’m at it, check out the photo of the Brit rockabilly DJ in a pink satin Cowboy shirt and a scarf jauntily tied around his neck. And the younguns’ in the Caesars look damn cool. Have mercy! Sure there’s no future in this, but damn if it don’t make the present more tolerable.

The photos are pretty great, but please avoid the awkwardly written “Roots of Rockabilly” chapter, where the author goes on a somewhat mawkish road trip to see the hometowns of Elvis and Hank Williiams and, well, much clumsy writing ensues. And the “Rockin’ Scene” chapter is no great shakes, either. The pictures largely redeem it, but archival photos from decades past would have made for a much more well-rounded history.