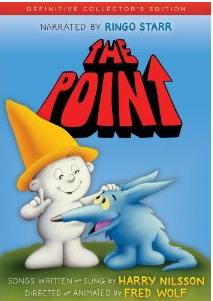 Sadly overlooked Harry Nilsson truly had the Midas touch. An amazing and engaging vocalist, a memorable songwriter (“Jump into the Fire,” “One,” and the sublimely wacky “Coconut”), and in 1971, children’s movie creator for his loving tale of non-conformity, The Point. In The Land of Point, everyone has one, except Oblio. Shunned by a vengeful Count, Oblio is ordered out of the kingdom along with his dog Arrow. Their adventures on the way back to a more enlightened homeland are a marvelous story, narrated by Ringo Starr.

The best works for children are the ones that both amuse and inform them, and aren’t so moronic or saccharine that the parents flee the room. The Point succeeds on all counts. The story is exciting, as Oblio and Arrow encounter all manner of interesting things, such as a Pointed Man and a “pointless forest” while learning the value of self-esteem and never giving up or being ashamed of what they are. Nilsson wrote several memorable songs for film: “Me and My Arrow,” “Are You Sleeping?” and “Everything’s Got ‘Em,” among others, and they are some of his most heartfelt and classic numbers.

This DVD features bonus footage including an interview with director and animator Fred Wolf, and several looks at the laborious process of getting the film made. When released, The Point was broadcast as the ABC Movie of the Week (remember those?), and was the first animated special to get prime-time viewing. If you have small children, consider slipping The Point into that stack of DVDs that gets watched over and over again. Because Spongebob ain’t got nothing on Oblio – or Harry Nilsson, for that matter!