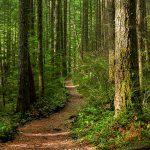 I always though Will wrote this play on a bet. Here’s the call: Can the Bard create FIVE sets of star crossed lovers, mix them up, and then sort them all out by curtain without resorting to deus ex machina? Cocky Will took the bet and won, just like this production wins on multiple levels.

The direction keeps the potential pairs sorted clearly. The only ill-formed motivation is the angry exile by a Duke of Everyone, and that’s so early on we can write it off to story motivation. Neither faeries, gnomes, nor lighting strikes are needed to pull it off, and bonus points for the five enormous ghost trees that went all the way up to the fly loft. University of Central Florida knows how to act vertically.

Duke Frederick (Paul Pelletier, Jr.) is the evil motivator in this story. We open with him booting out most of his court for no good reason other than we need to start somewhere. The exiles fly for the Forest of Arden, where they find a safe spot under the branches of the giant trees, but that abode is lacking in things like food and a place to crash. Duke Senior’s (Paul Pelletier, Jr. in a dual role) daughter Rosalind (Paige Mason) remains behind with her best friend Celia (Lawrence), Duke Frederick’s daughter. Why? Because it’s easier to fall in love from afar than to deal with the realities of a lover’s personal habits close up. Then there we have Orlando (Tyler Stevens), a young man shortchanged by his older brother Oliver (James Duncan.) Daddy is dead, and if Orlando had his way, so would his brother be. But there’s one redeeming facet in the boy: he’s completely in love with Rosalind. How can he woo her? Orlando agrees to wrestle Silvius (Andres Procel) to try and win Rosalind, and he handily beats the favorite. It’s as good as any WWE match. As to the four more pairings of beloveds, I’ll leave those to your own viewing.

Amazingly, this production keeps all this stewing hormonal soup clear and distinct. I’ve seen productions were you come out thinking, “now who was the tall guy and the girl in blue again?” That flaw does not appear here, and we have a rarity in a Shakespearean comedy: actual laughs drawn by ancient jokes from a modern audience. The set is dark and moody, but the lighting never fails to illuminate the action. This play also brings to mind a hard-to-prove but plausible conjecture on why our city was named “Orlando.” The plot motivation here is “Rosalind runs through the heart of Orlando,” and one of the city of Orlando founders loved Shakespeare, and thus “Rosalind Avenue” also is a main north bound drag through the downtown of the City of Orlando. Hard to prove, but fun to speculate upon. I’m happy to report UCF continues to produce spectacular theater with great production values, and can tackle challenging scripts and come out on top.