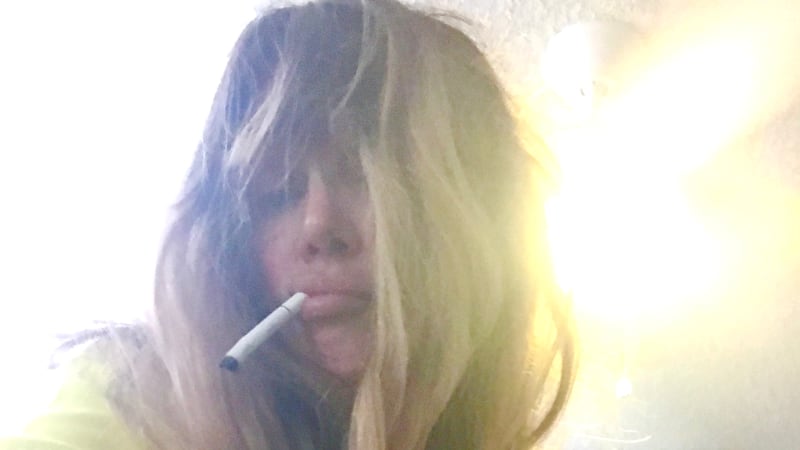 In the past three months, Black Bananas has played both the Format and Freakout Festivals. As one third of Black Bananas (and of RTX and Royal Trux), Jennifer Herrema is busy with a wide array of projects. Her music hooked me 30 years ago. What follows is our conversation about new music, art, fellow innovators, bitcoin, Substack, fashion, and Florida. Sometimes the guest of honor should have the floor to herself.

Please tell us about Black Bananas, the state of Royal Trux, where you are musically.

Black Bananas is an ultimate shape shifting vehicle, project, collaborative work for me. It is just as much about performance, real time creation (improvisation), and visual art as it is specific tracks or songs. It has morphed slowly into what I think of as an experience. The three of us that make up BB (me, Brian Mckinley, Kurt Midness) play together fairly often but not as a “band” rehearsing definitive songs but more as keeping our familiarity and chemistry in sync. There are new BB recordings that will be released when the time is right. A Trux documentary has always been the goal, but what I’m really excited about is the Trux movie that will also eventually come to light, but it will be contributions from more than any one person and will itself be another Trux style audiovisual frockumentary with villains and blood. The Trux movie will not be presented as a straight documentary, it will involve multiple perspectives, some acting, and a macro plot. I wrote and sang a song called “Death,” to the music Harper Simon wrote and recorded for the Meditations on Crime book (review on Ink 19).

The Freakout Fest (Seattle, WA) was cool… It was pretty loosely run, no real crazy festival hurry up and wait pressure. Nice. Black Bananas always seems to confound the people doing house and stage sound as we have no gear, just our laptops, guitars, synths, and vocal mics. We just go direct and use the stage monitors to hear and listen to each other. So when the stage monitors get turned off, which for some reason happens way too often, the structure of the jams that are meant to evolve and segue into improv most often have to be tossed out the window since none of us can hear each other or what each other is doing, singing, playing. It is very frustrating, but we had and have had to just push through. We really rely on stage monitors and the sound person controlling and setting them to dictate the success of our real time collaboration. It is something that must be remedied.

You’ve long used visual art as an extension of or addendum to your music. Where does that stand now?

Royal Trux’ new music or performance is on indefinite hold until it’s not. There are some interesting offers and opportunities but BB is my priority presently. I put together a bespoke Royal Trux original art, documents, and letters book for the Freeman & Lowe Boo-Hooray installation at the recent Istanbul Biennial. I have been talking with Johan Kugelburg from Boo-Hooray for years about them publishing a definitive Trux art book that would include art, photos, notes, letters, etc. It is not something I am concentrating on as it’s all stuff from the past and I pretty much only work in the present, but the opportunity to start the project with a sampling of original pics, art, and letters via a small, scaled down scrapbook for “The Reading Room” at the Istanbul Biennial presented itself. In making the scrapbook piece I kinda discovered a methodology that could culminate and perhaps eventually embody the full published collection. Creating a number of current art pieces over time via the collected archives of the past is the path I’ve started down.

I have been working on producing a repurposed wardrobe, non-profit, fashion line project, albeit very slowly. I have a number of fashion and art industry heads in line but need 80-hour days to drive it home sooner rather than later. I could really use an assistant (if anybody is interested in a position that requires cataloging and organization skills)! I have a huge storage space filled with my old clothes, jeans, tees, jackets, furs, hoodies, accessories, shoes, and boots that I accumulated over 35 years ago and am in the process of partnering with various designers/artists to use the collection as a means to repurpose and create new reinvented items à la the same Truxian methodology I apply to most all my creative work.

As you and Neil Hagerty (Royal Trux, Howling Hex) were a couple in Washington, D.C., concurrent with Pussy Galore’s start, I’d like to talk about Tom Smith. He’d played percussion with Pussy Galore before sharing the stage with Peach of Immortality, a thoroughly postmodern group. Smith’s mantra that “genre is obsolete” seemed to me a source of inspiration for Pussy Galore and Royal Trux, each having shaken off, to some degree, the obligations of genre or audience expectations.

I was sad to hear about Tom Smith’s passing. He was a D.C. treasure and fixture at the d.c. space and 9:30 Club venues with Peach of Immortality and To Live and Shave in L.A., etc., and he was right: genres and predictability are for suckers (not sure if he said that, but I imagine he would agree).

Word is that bitcoin holds interest. Tell us about that and adjacently the roles and responsibilities for forward-thinking artists.

I guess my penchant for new ideas and new ways of doing things is the driving force behind my excitement for blockchain technology and decentralization particularly. The way in which most things are done is centralized — top $$ tech dogs and the government are running our lives and hold all the cards. I understand that just like religion or cults people find solace in abiding by a defined “higher power” they perhaps believe is leading them to a better way, a better place, and most importantly, some sort of leader or ideology that they can rely upon to make choices and decisions for them. It lets individuals “off the hook” for determining their own path, destiny, life. There is always a scapegoat, someone to blame… it’s for suckers. I believe decentralization and new tech that embraces decentralization (blockchain) could be helpful in eradicating the current reliance on big closed-source tech. So yeah old (current) ways of interacting with technology are not (in my opinion) in societies’ best interest and much like any centralized organized religion they are inherently manipulative, but I believe there is a future where individuals — as opposed to groups — can maintain autonomy via decentralized (blockchain) technology.

I do not consider any of my work or the work of any futurists who have laid tracks as “quaint” or “nostalgic” but as generous, including one of my favorite future mapping minds, George Gilder, and George Gilder is not just a “Republican who advanced a case for supply-side economics and capitalism during the early Reagan years,” which could have him easily dismissed by the extreme political divide currently segregating our population. He is a futurist with the ability to see and understand where things are going, for better or for worse, before most anybody else. I find him fascinating but divorce his genius from any politics. Being ahead of the pack and often against the grain is not a choice and never changes regardless of time served on earth. I do believe “the condition” affords me the luxury of slowing to a sloth’s pace and excusing it as strategic. Perhaps there is a remote possibility of inadvertently becoming in sync with the general population — not an aspiration, just another reason to move slowly in this meth-flavored world. And my participation in anything not self-initiated is fairly infrequent and must be money, curiosity, or respect-driven as a rule.

What are your thoughts on the notion of a remaining an icon in the second decade of the 21st century? You’ve been dubbed such. Your fashion sense is inimitable but readily recognized. You’re a rock and roller.

“Icon” is a word that holds no weight or value in our western world currently (in my opinion). The word is purely passively manipulative as a signifier and transparently most often used when referring to its antonym. I have no motivation to share my thoughts and ideas with people that have not specifically asked for them.

Featured photo by Jennifer Herrema. This interview has been edited.