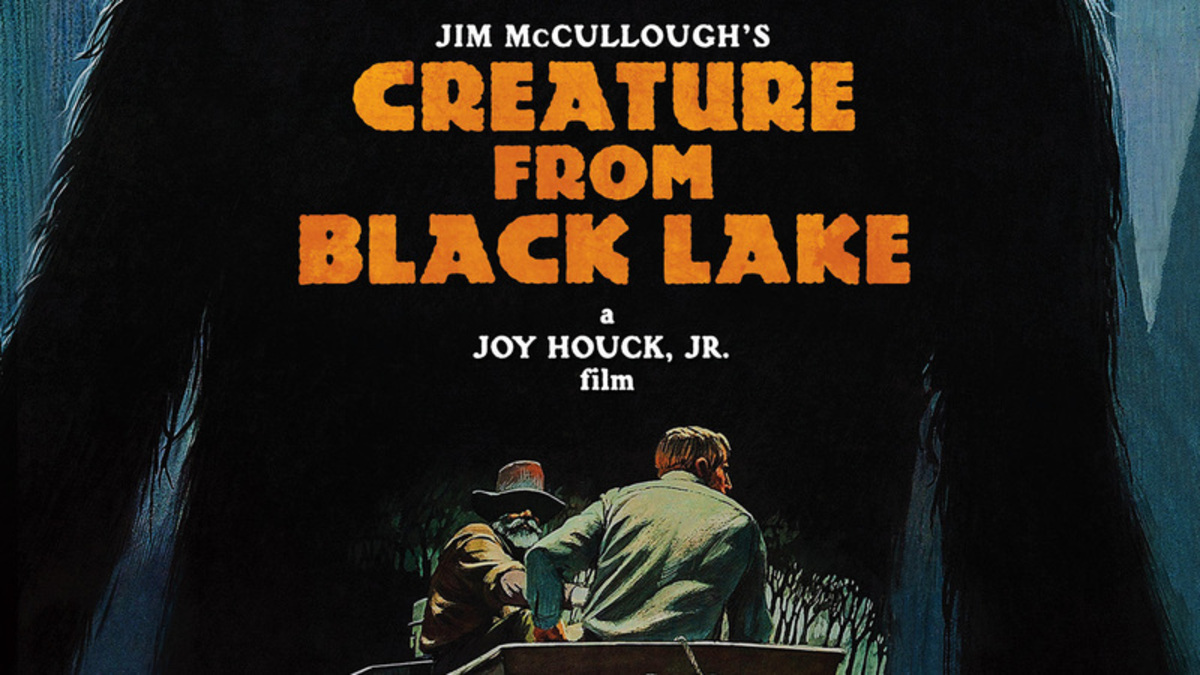 During the 1970s, two major cultural fascinations in the United States were UFO sightings and Bigfoot. Whether it was the Sasquatch in the Americas or the Yeti from the Himalayas, people couldn’t get enough of the reclusive cryptid as debates on its existence raged in smoke-filled bars and family rooms across the nation. Both reflecting and driving this discourse, movies and TV shows relied heavily on the creature, and many a film, TV series, and dubiously researched documentary would cash in on the notoriety. Although popular in TV programming aimed largely at kids (The Six Million Dollar Man, Bigfoot and Wild Boy), the sub-genre that would become known as Sasquatchploitation proliferated across drive-ins and late-night TV aimed at a horror-crazed youth and adult market.

Louisiana film maker Joy N. Houck, Jr. recognized the potential profits in the man-beast and decided to jump in and knock off Charles B. Pierce’s quintessential The Legend of Boggy Creek (1972) with his own take on the Bigfoot mythos, Creature from Black Lake. Although he plays with the faux documentary style of Pierce’s film, Houck mostly plays it straight with his tale of two college students from Chicago who decide to spend their summer living the van life in Oil City, Louisiana, to investigate the folklore and possible reality of a bipedal, ape-like creature lurking in the swamps of the Arkansas-Louisiana border. In fact, Oil City, Louisiana, and Foulke, Arkansas (the setting and filming location for The Legend of Boggy Creek), are less than 45 minutes apart, so their Bigfoot creatures are likely related, if not the same animal.

Inspired by their college professor’s lecture on the legends of Bigfoot, Pahoo (Dennis Fimple) and Rives (John David Carson) go in search of the elusive creature with the local legends of Oil City as their starting point.
Their inquiries quickly ruffle the feathers of the parish’s bully redneck sheriff, and the pair are ordered out of town where they join up with Orville Bridges and his grandparents, who after some coaxing and palm greasing relate how Orville’s parents were killed in a deadly encounter with the creature. The foolhardy duo know they are on the path of the beast, and even a night in jail isn’t enough to deter them as they continue their quest, until the creature finds them, in a horrific attack that leaves the two men physically and mentally damaged.

Low-budget exploitation filmmaking tends to find its talent in one of three camps: friends of the director who just want to be part of a project and are usually never heard from again, struggling young actors who often go on to professional careers, and older actors whose time has passed who are just looking for any work to pay the bills. Director Houck assembled a nice collection from categories two and three, fortunately leaving the amateurs behind, and the film is strong because of it. There isn’t a lot of action, gore, or sex to liven things up, so the movie relies on a lot of talking and character moments which would not fly with a bunch of friends and family peppered in the cast. Veteran character actors like Jack Elam (Kiss Me Deadly) and Dub Taylor (You Can’t Take It With You) work nicely alongside their young co-stars Dennis Fimple (King Kong, 1976) and John David Carson (Empire of the Ants), but the real star of the entire affair is cinematographer Dean Cundey, who would go on to shoot John Carpenter’s best films including Halloween, Escape from New York, and Big Trouble in Little China, but also the Back to the Future movies, Jurassic Park, and Road House. Cundey’s camera work and lighting add so much flair to what could have been a slog by making the real locations pop on screen and keeping the night sequences from looking so dark they’re imperceptible or the obvious day for night shooting, and it goes a long way in establishing and maintaining a sense of dread throughout.

While not the most beloved Sasquatchploitation flick out there, Creature from Black Lake has garnered a loyal cult following and is an entertaining entry in the cycle that manages to actually make Bigfoot scary, even if the film is lacking on the gore and nudity scales for a mid-‘70s drive-in product. Synapse Films has produced a terrific disc with a 4k scan from the original negative, which is a nice surprise since some of director Houck’s other films have not survived in as good of shape. The film is accompanied by a featurette with cinematographer Dean Cundey and an audio commentary from Michael Gingold and Chris Poggiali.

After decades of being as elusive as the actual monster, Joy N. Houck, Jr.’s peculiar take on the Bigfoot legend finally gets a proper video release, and the results were well worth the time.