with Skindred and Finch

H.I.M. may not be a household name here in the States yet, but in their native Finland they are rock royalty. Embarking on a “celebrity” endorsed tour (Bam Margera is rather obsessed with them, calling them “the greatest band in the world,” and adopting their heartagram logo as his own), they are surprising American promoters by selling out the clubs and theaters they’ve been booked into. Add that to the fact that their audiences are fanatical, and you’ve got the makings of a cult following. Just weeks into their first major U.S. tour, this band has already outgrown the midsized venues of America. 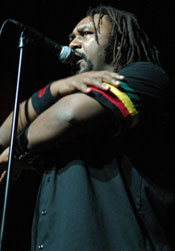 The House of Blues looked like Halloween, with the majority of its patrons wearing varying degrees of Goth chic. It’s amusing and encouraging to see so many young faces bold enough to smear on heavy eye liner and wear black lace. I felt 19 again, going to ’80s goth/industrial night at The Embassy! With such gloom and doom coloring the audience, it’s amazing that openers Skindred went over as well as they did. A rap/thrash/punk/reggae outfit from South Wales is an odd choice to pump up H.I.M.’s crowd, but singer Benji Webbe’s presence onstage is irresistible. Even if the music doesn’t grab you, his charming ways will. Dressed in black and highlighted with rasta colors, Webbe ignited the crowd with his exuberance and his tongue-in-cheek ridiculing.

“If this were a contest, this side of the crowd would be kicking your asses,” he calls out to half of the pit. When someone gives him the finger he replies, “Fuck me? For telling the truth?!”

After Skindred’s 30 minutes of pure entertainment, Finch played. Watching them makes me ponder a question that’s been aching my brain for the past couple years: When will emo die? It’s on its way down, but it can’t get there fast enough for me. 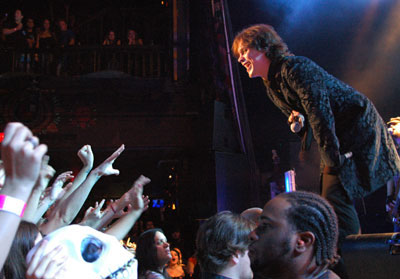 The wait for the headliner’s set induced more than the usual amount of impatience. This crowd was so desperate for H.I.M. (and specifically for singer Ville Valo) that people were piling into the floor area at such an extreme rate that the fans upfront were begging security to help them. Crowd surfers were toppling over heads not in elation, but in a desperate attempt to get out of the crowd, “I can’t breathe! Get me out!” was a common plea. As the security hands pulled bodies from the masses the mostly teenage wreckage inevitably collapsed at our feet in the security pit. Few passed out, most looked on the verge of vomiting. All of this, before the main act started! 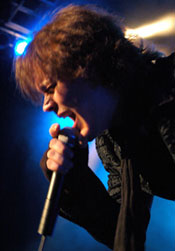 Having delayed their set an extra 10 minutes, presumably to allow for the crowd to settle, when the lights lowered and the famous heartagram backdrop was illuminated by blacklight, all worries of suffocation seemed to cease. There’s the roar of the crowd that naturally welcomes a headliner, and then there’s the reaction of a H.I.M. crowd, which was borderline maniacal.

Opening with their current single, “Rip Out the Wings of a Butterfly,” Valo’s baritone crooning and slow-paced seductive presence onstage reminded me, oddly, of Frank Sinatra. Yet his style of dress could be likened to Willy Wonka, and his smile to The Joker. He’s a strange arrangement of influences that can only be categorized within the title they have personally chosen for their musical sound, Love Metal.

Spending the majority of his time at the edge of the stage, singing to the largely female audience upfront, Valo is a metal frontman who seems to want to romance his fans rather than nail them. Backed effectively by four very versatile looking Finnish men, H.I.M. has something extra to offer that it’s difficult to label. It’s not just their music, which doesn’t do much to satisfy my ears, it’s their presence. Specifically it’s Valo and the aura that surrounds him. The fans can certainly sense it. Over the course of the long set, which included the Chris Isaaks’ cover of “Wicked Game” and the dark and sexy “Your Sweet 666,” the Orlando audience rested comfortably in the palm of Valo’s hand.