Omnisoul, based out of Newark, DE, went from writing college papers to music lyrics. Frontman Derek Furhmann got the group together through the power of an instant message and now, the band is preparing to release their first CD, Things That Could Be Said. Bassist Josh Berger chatted with me about the ‘differences’ between college and being in a band, the new CD, and ping pong. Yes, ping pong. 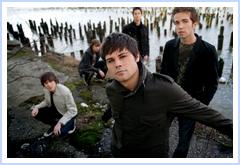 The best place to start–introductions. Who is Omnisoul and where are you coming from?

Omnisoul is a group of five friends, who met while attending the University

of Delaware. Musically, Omnisoul works so well because we all come from different

backgrounds and we all bring something different to the table. We are a very goal-oriented band, and we have a remarkable work-ethic. Our philosophy is simple:

lives for a long time to come.

What’s the meaning behind the name?

Truth be told, when we came up with Omnisoul, there was no deep or hidden

meaning. It was just a word that sounded cool to us. We thought that as our band

grew and progressed perhaps that word could be associated with our sound. In other words, instead of choosing a band name that defined our sound in the beginning, we let the band’s sound define the word.

Recently, we went through a brief period where we flirted with changing the

name. We came up with hundreds of really cool names, none of which we could agree fit us perfectly. And in the process, we almost killed each other. At one point, Derek just said “Guys, is this really worth it?” And it wasn’t, but it took going

through all the fighting to realize it. So now, “Omnisoul” as a band name means more to us than ever before.

The band got together in quite a unique way…care to explain for readers?

Derek wanted to start a band, but couldn’t seem to find anyone to play with. So he searched on instant messenger for musicians at UD, and sent IMs to hundreds of people asking if they wanted to get to together to play. Jamie (keyboards) was the only person who responded!! So Jamie and Derek started playing together, quickly realizing that there could be something there. Meanwhile, Josh and Tyler were playing together in another band on campus, and met Derek and Jamie through mutual friends. That was the first incarnation. A couple guitar players later, Shawn (who sang in an a capella group with Derek) joined on guitar and Omnisoul was born.

According to the band bio (correct me if I’m wrong), you are all from the

University of Delaware. Anything you miss about college?

Everything!!!!!!!! Freedom, lack of responsibility, ever-present social scene, meeting new people….wait a minute, this sounds kind of like being in band……

no seriously, college was a great experience, and we all miss it dearly. Of course,

being in a band is pretty cool, too.

What’s the one thing you can do, being in a band, that you couldn’t have

gotten away with in college?

Sleeping until noon….oh wait…. we did that in college, too….

If you guys weren’t doing this, what would you be doing now?

Some of us would most likely be slaving away in corporate America. At least

one of us would have a gambling problem. One might be learning to be a pilot. The

rest of us would have homes and babies.

How did you guys feel about your song “Waiting (Save Your Life)” being featured on the soundtrack for Fantastic Four?

It was such a rush! I mean, we literally signed our record deal, while in

the studio recording “Waiting” for that soundtrack. An even bigger rush was going to the premier and hearing the song in the movie. People often congratulate us on our “success” with this, but it’s important to know the difference between a success and an opportunity. Success can only come by making the most of an opportunity. We’re a very goal-oriented band, and our goals are lofty. So while, being featured in a big movie was a great experience, it wasn’t what we’d consider a “success” – it was an opportunity to have our music heard by millions of people around the world.

If you had one superpower, what would it be?

I have a thing for flying…….

One word to sum up this whole experience thus far.

How would you describe your sound in 5 words or less?

Any kind of rituals you guys have before taking the stage?

Yes, we do. But I can’t tell you. I’ll give you a hint though: it has to do with the movie Short Circuit

What’s the first thought you have in your mind before you take the stage?

We’re generally too excited to think. That’s what practice is for. But if the occasional thought strays into our minds, it’s either a) where’s my drink? Or b)

Any bands readers should be listening to?

I can certainly offer some suggestions: Radiohead, Muse, The Beatles, Jeff

Your CD is set to be released sometime this year, correct? Is there any title for it yet? Anything you can share about it?

Yes. We have a working title, it will be called Things That Could Be Said. The album will have 11 tracks, has a diverse group of songs, and it’s something we’re all immensely proud of.

Who are the band’s influences?

Like I said, we all come from such a diverse musical background. From jazz

to R&B to soul to jam band to pop rock to heavy metal. It’s all in there. There are

a number of bands that we all like: Radiohead, Muse, Coldplay, The Beatles, Michael

If you guys could tour with one band, regardless of their current status, who would it be?

We’d all probably agree on Radiohead. If it could be a band that is no longer with us, we’d choose The Beatles.

What do you guys have planned for the next six months?

If you and the band were forced to live on an island for a month, what would be the outcome?

Two things would happen: (1) We’d get sunburned, and (2) we’d discover that the island has mysterious healing powers, and that there is a group of other people already inhabiting the island (let’s call them “the others”.) Soon after we arrived, we’d find a “hatch” in the ground…and strange people from our pasts keep showing up…what’s going on?

I just want to say thanks again! Is there any info you would like to include that is a “must-know” about Omnisoul?

Thank you! Fun questions, we love that. We look forward to meeting anyone

who wants to get to know us. We all extremely down to earth, humble people at heart, and contacting us is easy. We’re very active on myspace.com. and respond to every email we get! www.myspace.com/omnisoul Also – We will challenge anyone to a game of ping-pong…

For more info and merchandise, visit their site www.omnisoul.com. And for

those of you wondering about that last statement–it’s true. I’ve been challenged

and I’m not backing down.