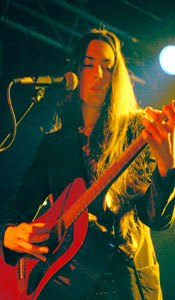 Sparklehorse was originally slated to play the much larger Metro across town, but due to alleged facility issues, the show was moved to the Double Door. Since the Metro can hold twice as many as The Double Door, a roomy Metro show quickly became a packed house at the Double Door.

Jesse Sykes & The Sweet Hereafter was a welcomed alt-country/pop primer for Sparklehorse. After expressing her gratitude, Sykes complained about the backlights setting her scalp on fire, but the lighting crew must have been enjoying the band as much as I was because the lighting crew paid no attention and kept them blaring for the remainder of the show. Sykes and company played a set that included tracks from her latest album, Like, Love, Lust & the Open Halls of the Soul, and explained after playing an expansive rock number that “that last song was about fucking, and this next song [‘The Aftermath’] is about realizing you’ve been someplace you shouldn’t have been.” Sykes had no problem digging deep into the heart, and her band only made it easier to explore the depths of human emotion. 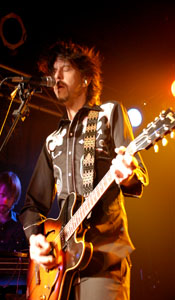 After waiting for nearly half an hour and a torturously long equipment set-up which almost cancelled out the (sweet) Sweet Hereafter performance, Sparklehorse eventually made their way on stage, led by the group’s founder, Mark Linkous, who courageously overcame a life-threatening medical situation back in 1996. And when he explained, mid-way through the set, that half the band was battling the flu, you got the feeling he might be drawing from past experiences to make it through the evening.

Now, I know, whenever a band says that they’re sick during a set – and the last few months during winter it’s been mentioned several times from the stage in Chicago venues – I feel pity for them, and part of me almost wants them to call it a night and possibly refund the tickets because I know they’re not playing their best and I don’t want them to suffer any longer. But there’s the flipside: the band usually needs the money. And unlike most people, musicians don’t have allotted sick days they can lean on when they’re under the weather. So, of course, musicians do the admirable thing and play on. And I guess we all suffer together. 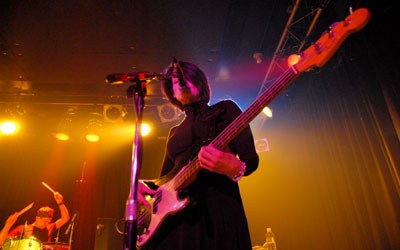 For not being at the top of their craft due to the flu, Sparklehorse nonetheless stuck it out and at least succeeded at making time both suspend and fly by at all the right moments. Also using a distortion mic, which turned Linkous’ croon into a distant rasp, he led the way through a brief dip into 2006’s Dreamt for Light Years in the Belly of a Mountain but hung out mostly in pre-_Dreamt_ albums and especially 1998’s Good Morning Spider, which was inspired by his recovery from his time spent in 1996 near death.

Despite the last minute change in venue, the nasty weather, the flu and the normal grind of touring, Sparklehorse rolled into Chicago in the dead of winter and fortuitously delivered their brand of transcendent lo-fi roots rock and left everything they had – including an encore – on the stage.