by George Khoury and Eric Nolen-Weathington 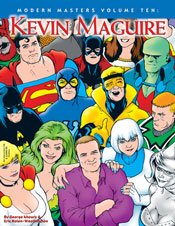 TwoMorrows’ Modern Masters series, which has in the past profiled comic book creators such as Alan Davis, George Perez and Walt Simonson, turns their attention to one of comics’ underrated artists: Kevin Maguire. Essentially one long interview, this book covers the many stages of Maguire’s career, from his breakthrough in the late 80s, to his creator-owned work of the 90s, and finally back to the major publishers.

Maguire burst onto the comics scene in the late 80s with his work on DC Comics’ revamped Justice League series. Prior to his breakthrough, Maguire worked in the art corrections department at Marvel Comics, under the guidance of John Romita Sr. Working in the corporate division for a major comics publisher is one way of breaking into the business, and Maguire took that route, as did Fabian Nicieza (with whom Maguire forged a lasting friendship and he provided the foreword to this volume) and Peter David.

Forsaking the dark and gritty motifs popular amongst comics at the time, Maguire (along with writers J.M. DeMatteis and Keith Giffen) presented a light-hearted, playful approach to DC’s long-time franchise. Maguire has a knack for drawing highly expressive faces, as well as gorgeous women, almost hearkening back to the Good Girl art styles of the 40 and 50s. Fans responded by making Justice Leage a sales hit. Maguire and company left the book in 1991, and to Maguire and his cohorts’ credit, the Justice League books faltered in both sales and direction until Grant Morrison took over the series and started it from scratch in the mid-90s.

Maguire’s creator-owned work, Strikeback, is given a lot of attention in this volume, as it was near and dear to his heart. Also covered is his work for Marvel in the late 90s, particularly on the X-Men franchise. Brought in to do an X-book that would be accesible to new readers, the project ultimately devolved into one of the continuity quagmires that the X-books are notorious for. Also discussed is his work on Trinity Angels for the late Acclaim comics, which made good use of his neo-Good Girl influences. Space is devoted to his late-career renaissance on books such as DC’s Formerly Known as the Justice League and Marvel’s The Defenders.

After reading this book, I have gained a new respect for Maguire, not only for his accomplishments in the field, but for his modesty and sincerity. Nowhere in this book does he brag on his accomplishments and accolades, and this forms a nice contrast with some of the more bombastic personalities that dominate the comics field.