Return of the Living Dead Boys 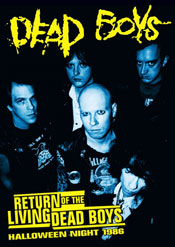 Dial R for Revelatory, daddy-o! No, I’m not talking about Joey Ramone’s phoning-it-in-intro for the band (even though he seemed enthused at the prospect of seeing Ohio’s finest together again). I’m talking about Stiv Batorrrrrrrrs giving his fucking all on a lonely Halloween night in 1986 at the Ritz Theater in then gritty-ass New Yawk City. Beyond just mere a cash-in, this is a master class on horror theatrics.

The stick-insect glam-goth dominatrix visual Bators cut was fearless. He looked utterly gorgeous – a vision of tight black leather – stripped shirtless except for three leather belts, leather elbow-length gloves, and leather suspenders. His skin was translucently pale, like marble or cocaine, and his vulture-ish features were completely obscured by a huge head of long, shiny, black hair and a German officer’s cap, which he helpfully gives to shaven-headed guitar-abuser, Cheetah Chrome, a few songs in. He banters like a motherfucker too, baiting Cheetah with Uncle Fester cracks and “Tell ‘em a joke, Cheetah, tell ‘em about your life,” trying to get taciturn bassist Jeff Magnum to say something, anything (“Fuck you” is all he gets), or speaking reverently of the Stooges before ripping into a lunatic cover of “Search and Destroy.” He takes full-body pratfalls, thrashes around the stage, jumps into the crowd, AND does the Silence of the Lambs thing. You know. That thing. EVERYONE got their money’s worth.

Aside from Bators, the performances were pretty great (everyone else looks like grizzled LA rocker dudes); Jeff Magnum and Johnny Blitz held the lightning speed thrashings down better than ever (though static with heads down, dunno, maybe just collecting the check), Cheetah Chrome on guitar with shaved head, eyeliner, and leopard print shirt manfully tries to one-up Bators, but it would never work. At best he’s the Izzy to Bators’ Axl. Speaking of which, watching this and remembering that old classic CB’s Guns N’ Roses concert that MTV screened back in the late ’80s – wowza, Axl really took a lot of liberties with the Stiv persona, no? But Stiv had tricks to spare, buddy, Axl couldn’t begin to scratch the (self) abusive decadence that Stiv dripped from every pore.

The set list was heavy on the classics (“Sonic Reducer,” “Ain’t Nothin’ To Do,” “High Tension Wire”), shit, for that matter most of Young, Loud and Snotty and We Have Come For Your Children and they execute the songs in fine, fighting-fit form, which is nice, considering what could have been. There’s also a revelatory cover of “Search and Destroy,” surely as much the nihilistic and unpredictable Dead Boys anthem as it was Iggy’s. On the one hand, I’m disappointed that they played “Sonic Reducer” twice – once at the beginning and once at the end – on the other hand, fuck, that’s a damn good song.

The punk fans are way less clever than they think they are, either disinterestedly clapping even in the face of this full ROCK ASSAULT, stage diving with a Reagan mask or shouting stupid garbled bullshit after snatching the mic away from Bators (“What he said,” Bators deadpans after one unintelligible rant).

The problems with this release were the same problems with every DIY punk DVD reissue that I’ve seen so far. Shot down ‘n’ dirty with one camera straight to videotape, the master tapes have probably been enthusiastically watched and copied way too many times, hence the occasional distortion and stretching of the image on the screen, and there were a few jarring skips here and there. I realize that it’s inherently unfair to rag on the technical limitations of a possibly bootleg concert recording, but it’s weird to see a DVD that screens like an old and beloved VHS tape. It’s clearly a step above the bootleg quality that you’d most likely have to settle for with other, more illicit Dead Boys releases and, for that matter, the image is a lot more crisp and the colors are a lot more garishly bright than on other MVD punk reissues.

Extras are more beneficent and essential than usual for an MVD catalog piece. This time around there’s a vintage “Sonic Reducer” performance clip (a-ok) and an absolute classic of modern surreal cinema, an interview with a pallid, greasy, black-garbed Bators from 1981 on a local cable-access morning show from 1981 called Wake Up, Youngstown. WHAT??? Suffice it to say, it’s even better than I could have hoped it would be. With a dazed Bators hidden behind sunglesses like some sort of vampiric local boy made good, clearly charming the hell out of the permed and leisure-suited host. Must be seen to be believed. No wonder John Waters loved this guy.