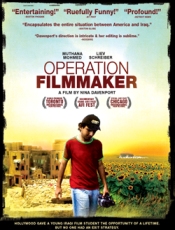 Do you remember the MTV True Life episode “I Live in Iraq” that featured an Iraqi film student? Actor/director Liev Schreiber does. On the eve of production on his film Everything is Illuminated, Schreiber saw Muthana on the MTV program and set to work on bringing the Baghdad film student to work on a Hollywood picture! However, early on, it becomes blatantly obvious that good intentions will pave this road to Hell.

This documentary in particular tries to follow the standard objective style of documentary filmmaking, but when things get really tough, the filmmaker herself is dragged into the entire mess. If you really enjoy watching a train wreck, this story is for you. The audience witnesses Muthana’s initial excitement about working on Illuminated, but when he finds himself sorting nuts for the producers’ snacks and acting as a “runner,” he becomes confused about what the words “Hollywood filmmaking” mean in practical terms.

This is a really great when-things-go-horribly wrong documentary, but it gets a little too dense around the 30-minute mark. Stick with it, though, because it’ll just get more frustrating. Oh, yeah, and Dwayne Johnson (The Rock) has an Ed McMahon moment later on. And the documentarian loses her mind. Really compelling stuff.