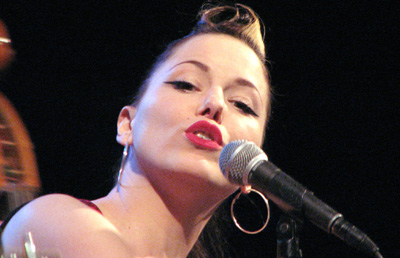 It took just one song for May and her band of aces to cast their spell, and 45 minutes later the Irish rockabilly/blues sensation had a theater full of new admirers. Which has been the purpose of rising-star May’s support slot on jazz-pop marvel Cullum’s U.S. tour – to introduce Americans to what we’ve been missing.

And we’ve been missing a lot over the past two years, apparently. 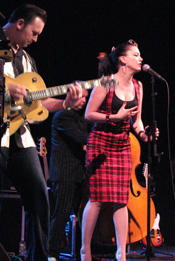 May and her hepcats opened with a pair of rollicking numbers from her breakthrough album, Love Tattoo – “Feel Me” and the CD’s title track. It was instantly obvious that May was not just a pretty face with a rockabilly ‘do, and that she was no flash-in-the-pan. As vivacious as Ann-Margret in her Elvis-smooching youth, May is the kind of seasoned, yet hungry performer who seems to sing to each person in the audience. She’s a stage-roamer, a clapper, a tambourine-tapper with a very expressive face and an exquisite voice that was made for this kind of work.

Plus, May has great taste in cover choices – her first selection was an amazing, range-revealing nod to Howlin’ Wolf, “Poor Boy,” a number she sings on Jeff Beck’s upcoming CD, Emotion & Commotion. Barely pausing, the band then paid tribute to Johnny Burnette with a jaw-dropping, intense “Train Kept A-Rolling.”

Pointing out that Beck, Les Paul, and multi-tracking weren’t available that night, May and Co. brilliantly re-created the Paul tribute she and Beck performed at the Grammys, “How High The Moon.” 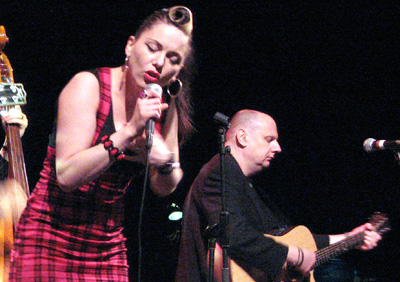 Though Love Tattoo is a marvelous, must-have record, it became crystal-clear that May and her band were “live performers,” i.e., they’re much better in concert. Renowned UK rockabilly guitarist Darrell Higham (May’s husband), double-and-electric bassist Al Gare, drummer Steve Rushton, and utility infielder Dave Priseman added even more muscle to the already-compelling studio numbers. For example, Higham and Gare fretted the frenetic “Watcha Gonna Do” into a ’60s spy theme, complete with Priseman’s mariachi trumpet for effect. May’s audience-captivating rendition of her tough-girl blues anthem, “Smotherin’ Me,” hinted at her years in burlesque theaters, small clubs, and roadhouses… stage presence to spare.

And the audience didn’t just applaud at all of this, they roared and whistled their approval of the Dublin diva they’d been waiting to see, this newfound favorite and her exciting, dynamic band. They didn’t even wait for Higham to pause before cheering his blistering solos. 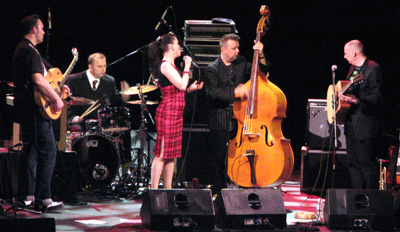 Wondering if Seattle crowds liked sing-alongs, May giddily launched into a concert favorite, “Tainted Love,” before picking up her bodhran and closing with the drum-beating, bass-thumping UK hit, “Johnny Got A Boom Boom.”

In a blink of an eye, this 11-course appetizer was over, and an appreciative Ms. May – with barely a toweling-off break – was out in the lobby signing autographs and posing for pictures with a long line of her new fans, as if it was 2007 and she had just finished a club gig.

Those disappointed in the set’s brevity can be consoled by the fact that this golden girl will be surely be back with a full menu; a new album is around the corner, as well. May is poised to spearhead another roots-music revival on this side of the Pond; no one will be surprised if this dynamo makes another appearance at the Grammys, with an acceptance speech in hand.

After which she undoubtedly will be cheerily signing autographs.

See more photos of Imelda May at www.stevestav.com.