The Flaming Lips are without a doubt one of the most exuberant, eccentric, energetic bands on tour. Their concerts are a wild circus under an orange and yellow electric Day-Glo tent. And Wayne Coyne is the boisterous, foul-mouthed master of ceremonies of this three-ring Cirque de Soleil on acid, walking through the vagina-like tent flaps encased in a plastic bubble and occasionally donning a pair of giant hands to throw laser lights at suspended mirror balls. 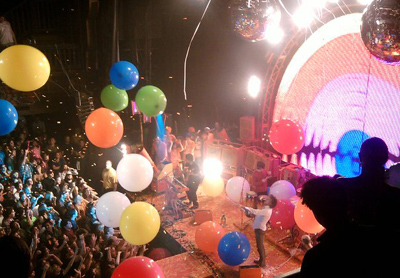 Disney World was a perfect fit for Coyne and the band’s pussy-obsessed, strobe-light and balloon pulsing, confetti-blasting show which invaded the House of Blues Orlando at Downtown Disney last Thursday night.

The opening act, post-feminist three-piece no-wavers Le Butcherette, gave a strong performance. Lead singer Teri Gender Bender sounded like Siouxsie Sioux from Siouxsie and the Banshees, according to Ink 19 alumnus Mike Crown, who just happened to be standing next to other friends I met at the HOB.

After a bunch of kids in orange jumpers ran around setting up the equipment, the Lips’ adventure commenced.

Coyne gave a brief warning about the 20 strobe lights used on several songs, saying “We turn them up to maximum capacity. We love that.” But he warned that some folks could have a bad reaction (he claimed even some band members occasionally had a bad reaction).

“If you feel you’re having a bad reaction, well, we want a good reaction, fuck yeah! Just don’t look at the lights. Look away!”

With that Coyne disappeared, the lights went down and with two swift downstrokes to the drums, the show kicked into gear and didn’t let up for nearly two hours.

A gyrating young woman danced and swayed to the music on the LED screen behind the stage, her person-sized vagina a throbbing light as “The Fear” blasted out of the speakers.

A door opened in the screen and band members Steven Drozd, Kliph Scurlock and Michael Ivins popped out, being born on stage. They each walked down an orange ramp and jumped on a hand-painted vagina on the stage before taking their positions.

And then Wayne came out to wild cheers, climbing into his bubble and inflating it before launching himself into the audience in the pit of the HOB. 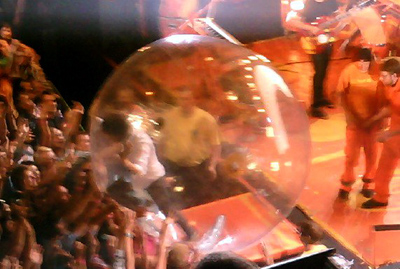 Jeff Schweers
Wayne Coyne rolls out in his bubble

Back on stage, Coyne got out of his bubble and grabbed his signature bullhorn and the band segued into the hard-driving “Worm Mountain” as a pulsing black and white op art video played on the screen. Coyne stomped around a confetti gun, blasting confetti up to the third level at HOB.

An insane number of huge balloons was released, too, practically filling the vertical space between the pit crowd’s heads and the ceiling rafters, prompting Coyne to observe, “That’s a lot of fucking balloons!” They’re used to bigger outdoor festival venues with crowds of 10,000, Coyne said, so he urged the HOB crowd to really scream so Kliph the drummer would “get fucking into this thing!”

Coyne rode atop the shoulders of someone in a black bear costume for “Silver Trembling Hands,” grabbing the bear’s snout and riding it like it was a bucking bronco.

The Lips dove way back into their catalog for the third song, “She Don’t Use Jelly,” a very enthusiastic sing-along. They even showed clips from the original video on the giant screen.

They followed that with two more songs from Embryonic – the beautiful “The Sparrow Looks Up at the Machine” and a really dynamic version of “Powerless.”

The audience received the songs from Embryonic warmly, but really lit up whenever The Lips tossed out one of their older, better known songs, like “In The Morning of the Magicians.” One of my friends at the show sighed, “Oh, it’s such a beautiful song.” It was made even more beautiful by Coyne’s spare, Miles Davis-inspired bugle solo.

Coyne then quickly jumped on the opportunity to draw a parallel between himself and another visionary artist and entertainer, Walt Disney. 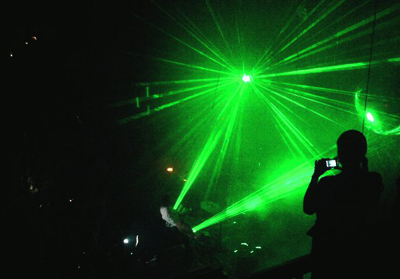 “This is the Disney World, isn’t it,” he said breathlessly, still holding the yellow maracas he shook during “Magician.” He wondered how the name Disney got to be synonymous with all things safe and bland. “I mean, Walt Disney had his head cut off and frozen!” Coyne said, predicting that ol’ Uncle Walt would be pissed if he ever got his head thawed and reattached so he could see what his dream had become. Coyne surmised that Disney would not be pleased with all this safe stuff, and would advocate that we all smoke pot. Concept album, anyone?

Then Coyne and Kliph got the band to sing along to the charming and giddy “I Could Be a Frog,” getting all 2,000 of us to ribbit, roar, growl, chirp, and meow along with Kliph.

But the audience went absolutely nuts when Coyne began strumming the opening chords to “Yoshimi Battles the Pink Robots,” even shouting the little “hey hey” and singing themselves hoarse on the chorus. It was a lovefest.

They went back to Embryonic with “See the Leaves” as Coyne smashed a stand-alone cymbal with an over-sized mallet. And on “The Ego’s Last Stand,” Coyne struck a gong rimmed with flashing psychedelic lights.

“The W.A.N.D.” was the band’s big finale, before walking off stage and making the audience scream their lungs out for the first encore, “The Yeah Yeah Yeah Song” and finally a sweet, lovely version of “Do You Realize?,” which in a way is a perfect ending to a concert that started out with a psychedelic live birth. Because everyone you know will die eventually and every concert has to end and we all had to go home, but at least we could say we got to see one of the best fucking live bands performing today.

Come to think of it, next time the Lips play Orlando, they should perform next door to the House of Blues at the Cirque De Soleil theater instead.