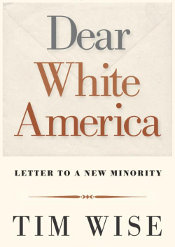 “To be white has been to take a lot for granted over the years, and to assume that our normal was everyone’s normal; that our way of seeing the country and the culture – and that our experiences within both – were the ones that mattered, and were normative for all.”

To make sense of our national discourse, be it on race, politics, or civil rights, you only have to look at the demographics. Forget the idea that our nation is a Christian nation – it isn’t, and only regressives will argue otherwise – but since our founding we have been a white nation. White people founded it, grew the boundaries from sea to shining sea, and made the rules. Now, they could only do it with the forced labor of minority slaves, or by exterminating those that prospered on the continent before the first white man gave them smallpox-infected blankets, but the story of America is told, as all histories are, by the victors.

Sometime around 2050, “white America” will no longer be the majority race. The exact date of course is flexible, but some people see the writing on the wall – in Spanish – and react like cornered animals, striking out in fear. The election of Barack Obama sent them around the bend, to the comforting homogeny of the all-white Tea Party and Fox News. They see a world in evolution, and hate it. For as long as they can remember, the only voices that mattered spoke with their tongue, worshiped the same god, and generally looked at the world as they did. Obama is just the harbinger, they feel, of the ruination of the country. Turn on any cable news network and you’ll hear promises of “taking our country back,” as if that were even possible, not to mention desired. As Wise reminds us:

“As Santorum recently bellowed on the campaign trail, America was a “great place before 1965,” a statement which is not even remotely true, and which stands as a slap in the face to every person of color who resided here before that time.”

The 1960s saw landmark changes in America. Medicare and Medicaid gave poor people some hope of health equality, and the Civil Rights Act of 1964 banished institutionalized apartheid. When Santorum speaks in dog whistles on the greatness of America prior to these events, his white supporters respond as expected. No one has to say the n-word; it’s understood by those who think in those terms. It’s not a new tactic for the GOP. Ronald Reagan, when running for president, gave a speech in Philadelphia, Mississippi – the site where three civil rights workers were murdered in 1964 – in which he spoke in the same fashion:

“Programs like education and others should be turned back to the states and local communities with the tax sources to fund them. I believe in states’ rights.”

States’ rights, you’ll remember, was the dog whistle that started the Civil War.

Tim Wise has spent a lifetime examining race – and racists – and this may be his most illuminating work. In the same way Freakonomics showed us the true import of numbers, Dear White America illustrates the tie between a rapidly changing and increasingly diverse population and the obstacles we as a nation face, going forward. People, especially older, more conservative ones are resistant to change. They find a reassurance in “the ways things used to be”, and see any deviation from the way they were raised to be a threat. It’s why they can call people “illegal,” overlooking their own immigration history, instead of finding common ground. Wise shows that this understanding, or rather, lack of one, poisons us as a people, keeps us from evolving:

“Indeed, had we allowed ourselves to see the commonality of interests early on… the pain and anxiety so many of our number are currently experiencing may never have manifested at all.”

To be white in America by and large has meant that you are first. From education to employment to health care, you’ve enjoyed a greater amount of “firsts” because of your race. You didn’t get “redlined” in a house loan because of your race; you didn’t have to pay a poll tax to vote. You’re not stopped by police in Arizona to “show us your papers.” Perhaps if more whites had to deal with such there wouldn’t be the inequality we see all around us. A wise man once said “Don’t judge a man until you walk a mile in his shoes.” Being white means you never really have to. You really don’t have to learn another man’s pain, his struggles, because until recently it didn’t apply to you. You were, according to popular mythology and portraits, made in God’s image. And this mythology, Wise states:

“… will render our nation utterly unworkable in years to come. How, after all, can the United States remain an economically viable nation if we get to that place thirty years from now where people of color are half of the population, and yet still twice as likely as whites to be unemployed and three times as likely to be poor? … The answer is that we cannot, and will not. Equality is the last, and only, remaining hope for this experiment we call the United States.”

This is a book of hard questions, and even harder answers for many. Until we understand that America is that “shining city on the hill” for all, not just the palest among us, there is no hope.