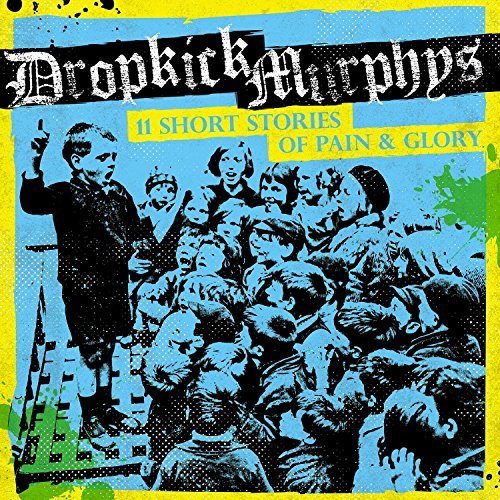 11 Short Stories of Pain and Glory

For the Celtic punk band’s ninth album, the Dropkick Murphys do indeed tell stories. Sometimes they are melancholy, sometimes tragic, and as expected, sometimes hilarious. They do it all with a musical flair that sometimes evokes The Clash and other times The Beatles, but always with their signature Celtic spin.

The biggest surprise to me was finding a version of “You’ll Never Walk Alone” from Carousel on here. It turns out that after leaving yet another overdose wake, singer/bassist Ken Casey was struck when this song came up in a random rotation in his car. The chorus, “Walk on, walk on with hope in your heart and you’ll never walk alone,” struck him as illustrative of the struggle and how you don’t have to do it alone. This version maintains that evocative feeling, while updating the track to fit in seamlessly with the Murphys’ catalog.

As expected from an album with “Pain” in the title, we get some songs dealing with addiction. They look at what it takes to pick yourself up after a fall in “Paying My Way,” while “Rebels With a Cause” puts the spotlight on the street kids who often seem invisible to us. But it’s not all doom and gloom, because it’s the Murphys. Nostalgia reigns supreme in “Sandlot” as they guys reminisce about their youthful indiscretions, while a new drinking song is birthed in “I Had a Hat” wherein Casey’s hat goes missing during a wake, and he intends to get it back. Even the most serious subject matter can be dealt with positively. “4-15-13” pays tribute to the victims and heroes of the Boston Marathon bombing, but not as a dirge. The band keeps the tempo strong as they celebrate that even though we are all different, we are all in this together.

My two favorite short stories are “First Class Loser” and “Kicked to the Curb.” The former is a treatise on dealing with that one guy we all know, whether family, friend, or friend of a friend, who is “everything that you despise.” The latter is an up tempo breakup song as only the Murphys can bring us – “I ain’t got no money; I spent it all on you. I ain’t got no money, honey; I don’t know what to do. / I ain’t got no girl; she kicked me to the curb. I ain’t got no honey, and she took all my money. / I shake my fist at the sky; I smash my head on the wall. It doesn’t change a goddamn thing, ‘cause I’ve gone and lost it all. / So come on Sally, whatcha gonna do? Break my heart and leave me, for another fool.”

11 Short Stories of Pain and Glory definitely delivers on the title. The songs range from bleak to bouncy, reminiscent to rebellious. Die-hard fans of the band will snatch this up immediately, but if you have never heard the Dropkick Murphys before, or you have only heard them on a soundtrack, do yourself a favor and check this out.